SOS call on the fringe of the galaxy, planet with no sun

I remember a short story from the early 1970s. I think it was in a “best science fiction stories for Boy Scouts,” but being 40 years ago, I may be wrong.

Anyways, the story goes that a scout ship is out on the fringe of the galaxy when they get an SOS call from a nearby planet. However, they are the only ship in the area. After landing, they send the captain who, by rotation, is the designated explorer. The planet is fully dark (no sun). He finds a wrecked ship with two survivors, one of whom is badly injured. He sends the two back with his return beacon, knowing it will leave him stranded alone on the planet. However, it gives humanity a chance to find another resident of the galaxy.

The answer to the other question was never accepted, but it appears that the answer is The Samaritan by Richard Harper. It appeared in The Boy's Life Book of Outer Space Stories which matches your criterion of "a best science fiction stories for Boy Scouts” type book.

The cover looks like this (I still have this book, but this is not my picture): 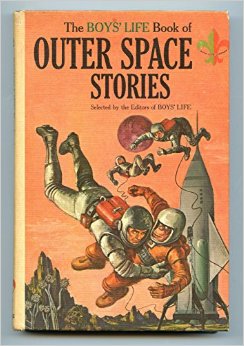 17
Short story about an astronaut who discovers an injured alien

12
Stranded aliens on Earth set up rescue beacon
11
Name of a YA sci fi anthology?
10
In which Science Fiction (probably Star Wars) story is FTL used to jump to other side of a planet?
12
Looking for book of short stories. One with a girl who gets infected by an alien parasite/symbiote
15
Story about terrorists that destroy wormhole and leave planetary system isolated from rest of galaxy
9
Book about an astronaut who is tasked with investigating the disappearance of a shuttle in the vicinity of a small forest planet
35
Short story about aliens warning humanity not to leave Earth
6
Spanish-language (translated?) comic containing multiple short stories (Atlantis, time-travel, space colonisation...)
25
A spacefaring society had split the military into separate groups of technicians and pilots