Is Han Solo a criminal in the New Republic?

In Legends, we know that as the Rebellion transits into a Republic, their relations with smugglers etc. grew tense and eventually broke up because smugglers are criminals under any galactic government's law. Smugglers only helped the Rebellion because a Republic is easier to operate in than an Empire.

That is in Legends, but the same principles apply to the New Republic of canon. We know that at some point, Han Solo went back to smuggling - "doing what he does best". As such, is he as a smuggler a New Republic criminal and maybe even a fugitive?

According to the factbooks released alongside the film, Han has indeed returned to a life of crime.

From Star Wars: The Force Awakens: The Visual Dictionary

After the Galactic Civil War, Han Solo's life took unexpected turns as he became husband to an influential New Republic politician, a family man and - for a time - successful racing pilot. But the peace of this life as not to last, and after a profound tragedy upended what had become normal for the Corellian, Solo returned to his old life as a tramp freighter captain, smuggler and freelance law bender.

As easily as the Millennium Falcon fell into Solo's life after a heated game of sabacc, so it was destined to abandon him after a change in fate. Solo made do with other ships at his disposal, eventually settling on an enormous bulk freighter named the Eravana, which he uses to haul massive shipments of legally questionable cargo. The ship is largely automated, meaning Solo and Chewbacca can handle most of the work, but on particularly dangerous or profitable hauls he hires additional hands.

From Star Wars: Incredible Cross Sections - The Force Awakens we see that Han is carrying stolen items, illegal speeders and black-market animals such as Rathtars. 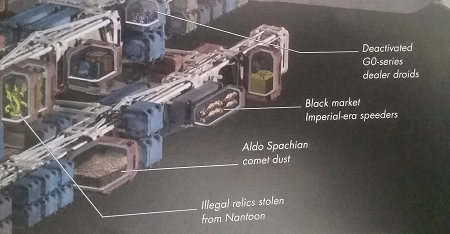 The pair who came aboard the Millennium Falcon were not stormtroopers but smugglers. One was old, human, and somewhat scruffy-looking. The other was almost a half-meter taller and much hairier. They entered the freighter with a measure of fondness and caution, as it had been a long time since they’d walked down her corridors.

Not the answer you're looking for? Browse other questions tagged star-wars the-force-awakens han-solo or ask your own question.

23
How did Han Solo become a rebel?
9
How does Han Solo call Kylo Ren?
5
How many people has Han Solo killed?
11
How could Finn know about Han Solo, given Finn's upbringing?
31
Who are these “Han Solo” actors?
5
Was this inspired by the old Han Solo novels
12
Why did Han Solo change his mind in the end of New Hope?
0
Technically speaking, was the Millennium Falcon ever used for piracy?