1960s SF novel with sub war, telepathy, dolphins, recreational drug that makes you sick, then cures you for fun

I've clarified the details and added a few things I've remembered since first asking the question. I hope that helps someone figure this out.

I'm trying to recall a short novel probably from the 1960s, possibly as early as the late fifties or maybe even the early seventies. I read it in a cheap paperback edition. As I remember, the cover was white and the front cover had an inset illustration, done in blue tones. It may have featured a stylistic rendering of a submarine and a dolphin. It might have looked a little bit like this rough draft: 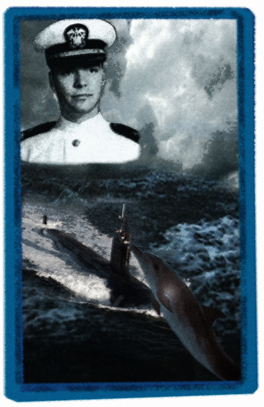 At a guess, I read it in the late sixties.

I believe the protagonist was a naval lieutenant. At the very least, he was an officer of some sort, but not as high in rank as a captain.

The story was set in the waters along the coast of the United States, possibly the East Coast. Shore leave was taken in someplace like Miami or perhaps another southern coastal town.

A war was raging and almost everyone was in the military in some way or another. The putative lieutenant served aboard a submarine, working with dolphins in reconnaissance or perhaps sabotage. Telepathic communication may have been used to talk to the dolphins.

When on shore leave, he led a wild party life, sometimes using a common recreational drug that delivered its high by first giving a person a serious illness like the plague or typhus and then delivering a time-release cure. People enjoyed the delirium induced, and probably flirting with death. That part went over my head when I first read it. He also drank while taking this type of drug, something he shouldn't have done. He also may have taken multiple versions of the drug with different diseases encapsulated.

It was the unusual form of recreational drug use that brought the novel back to mind.

The war was being waged between the United States and some version of the Soviet Union, or perhaps an Asian superpower. Things did not seem to be going well.

I have no idea how it ended, but I don't remember it ending on a hopeless note.

It's not a canonical novel, but I don't like not being able to recall anything else about it. Any help would be gratefully appreciated!

Solved with credit and much thanks to Buzz. It's Slave Ship, by Frederik Pohl. See the answer below.

Now the original question that brought me here has an answer.

It's possible this might be Slave Ship, the first novel by Frederik Pohl, published in 1956. The protagonist is a junior naval officer, and it's set during a world war. Toward the end, I believe that he commands a submarine crewed by animals that are being controlled telepathically. Then the story ends rather abruptly.

I didn't remember the drug aspect, but it is part of the story. Moreover, in Slave Ship people do engage in some kind of risky telepathic activity, which is only possible with the right equipment. I can't recall all the details, but I think the main character is "addicted" to it, because it is the only way he can commune with his wife, who has been captured by the enemy. 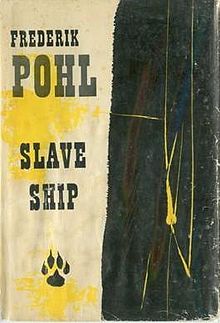 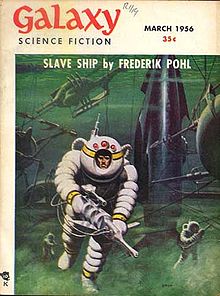 Free copies of the issues of Galaxy that it was published in are available via the Internet Archive:

Not the answer you're looking for? Browse other questions tagged story-identification novel warfare psychic or ask your own question.

8
Underwater cave, portal to another world, where time passes in an instant of real-world time
8
West Coast tribal warfare with a dollop of aliens on the side
5
Trying to identify a novel that features communication with dolphins
7
Weird West novel from the mid-90s
10
Novel: Teacher communicates with alien object using science concepts
11
Book about an island that starts sailing across the ocean
5
Science fiction trilogy: endless corridors, humor, speeding vehicles, assertive woman
6
Story identification: Protagonist with headaches on planet where he can heal everyone