I am looking for the name of a series of fantasy books that, I read in the early 2000s (not sure on their release date) about a male protagonist who goes to a special temple to learn red magic. Within the world of the book there is black, white and red magic, each with distinct characteristics.

At some point the protagonist has to memorize a mosaic in order to complete one part of his training. I remember the antagonist being a former friend of the main character and also having a snake-arm. Pieces of a special mirror are used to teleport through long distances.

Sorry for the vague details.

As per Jonah's comment above, the colored schools of magic: black, white, and red, map to the Dragonlance universe. 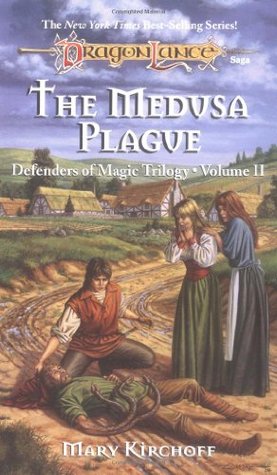 "The star-shaped mosaic pattern in the summer dining room of Villa Rosad… These symbols reminded Guerrand of the configurations of colorful tiles Justarius required all of his apprentices to memorize through visualization to heighten their awareness of magical patterns."

The Goodreads summary includes the following line (emphasis mine):

.... Bram has unwittingly given an evil mage -- once Guerrand's friend, now his archenemy -- the key to destroy the three orders of sorcery.

"Lyim had never grown used to the looks of revulsion his snake arm drew .... his limb had been replaced by a living snake."

Further searches for keywords like "mirror" reveal that indeed, there are fragments of a mirror being sought that transport one to another realm.

Sounds similar to the Wheel of Time series .

Rand al'Thor is the main male character who is the Dragon Reborn who gets snake like dragons on his forearms.

There are three main sources of power: male, female and the One power (black).

There are also mirrors that "transport" people.