What long-looking worms are the Klingons always eating?

I was reading an article on arstechnica here and I remembered that in Star Trek, Klingons are shown eating a lot of long looking worms.

Anyone know what they are? Has anyone tried them? Or they just acting, and the people are not actually eating the worms?

These are serpent worms, commonly called gagh by the Klingons.

There are different types of gagh, such as one kind that jumps, one that wriggles, and one that has feet.

Klingons usually eat it alive, but it can also be served stewed, or cold.

It's a safe bet that the actors were not eating real worms. If anything, it was probably spaghetti.

From the Star Trek Cookbook:

There was another dish, the famous gagh, that always had to look like living worms, especially when the Klingon warriors scooped them up in their hands. Orriginally the gagh were white, not whole wheat, Oriental udon noodles that I dyed brown with soy sauce. As a base, you can use soy sauce, some sesame salad dressing, the salad dressing you use for Chinese Chicken Salad, or the brown stir-fry sauce that really clings to the noodles and acts like a dye but really isn't. 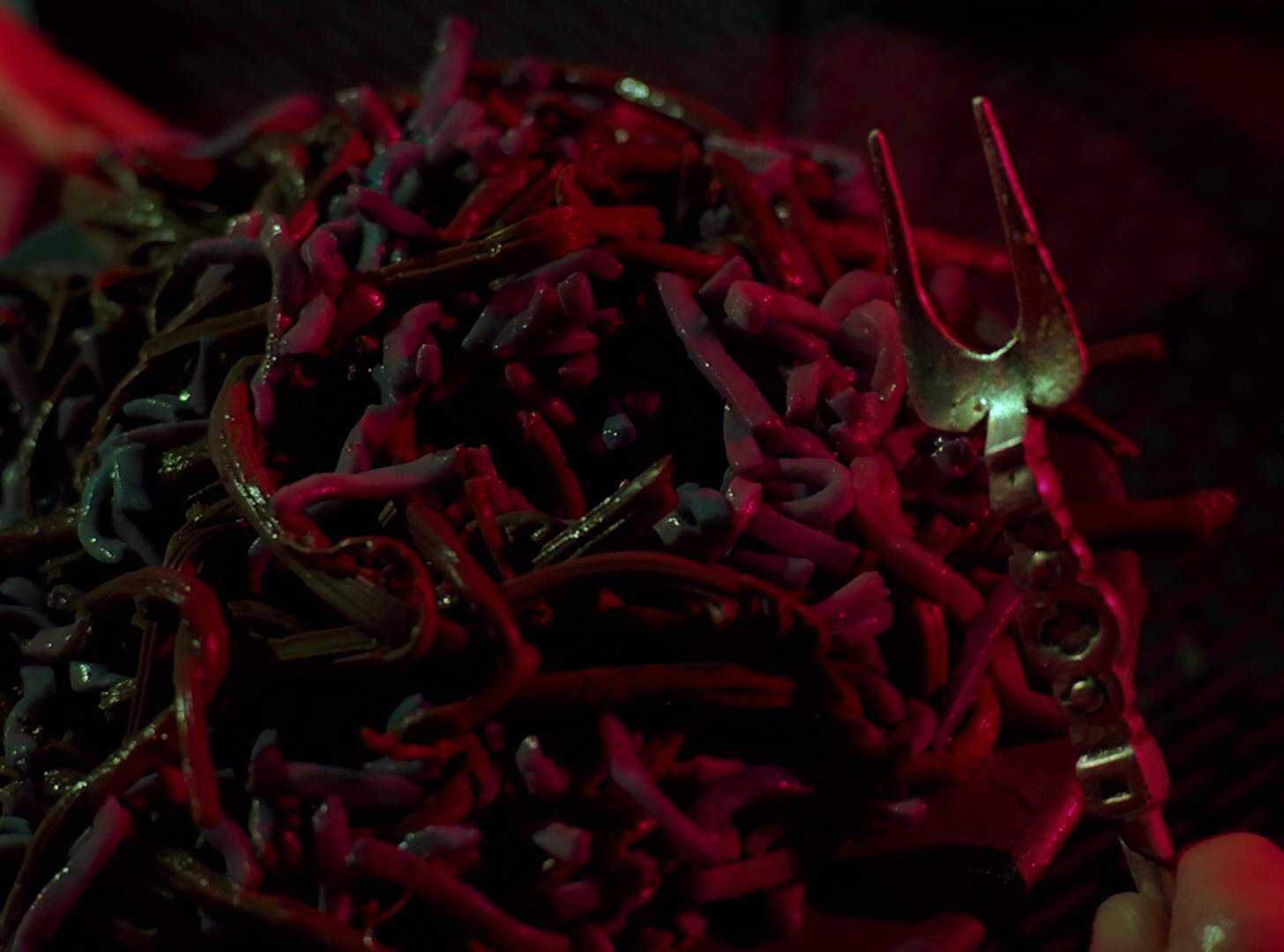 To add to the in-universe answers, it seems like the prop gagh is made from Japanese Udon noodles, according to the Star Trek cookbook, page 59:

There was another dish, the famous gagh, that always had to look like living worms, especially when the Klingon warriors scooped them up in their hands. Originally the gagh were white, not whole wheat, Oriental udon noodles that I dyed brown with soy sauce. As a base, you can use soy sauce, some sesame salad dressing, the salad dressing you use for Chinese Chicken Salad, or the brown stir-fry sauce that really clings to the noodles and acts like a dye but really isn't.

Probably pretty tasty, though he later goes on to say that he mainly was going for the look and the taste is secondary. If you're interested, here is an account of someone who made and ate it.

That would probably be the Klingon delicacy known as Gagh. Looks pretty tasty! 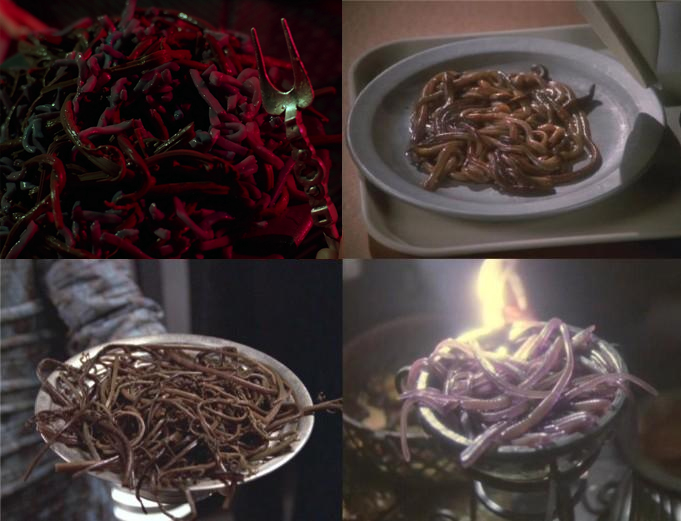 There is also racht (which nobody else mentioned), which is essentially a larger version of gagh. I'm not sure if any in universe details are given on their relation. The only time I recall it being seen was in DS9's episode Melora, as well as when Jadzia Dax ordered it in DS9's Playing God:

As for gagh, expanding on the other answers here: There are many varieties. I'm not sure if any other types are detailed in universe, but from the DS9 episode Prodigal Daughter which I just coincidentally happened to watch last night, there is at least:

The dialog in that episode implies that there are at least 51 varieties:

KIRA: How much gagh did she order?
ODO: Fifty one cases.
EZRI: Each containing a different variety.
KIRA: There are varieties of gagh?
EZRI: Oh, yes. I can remember what each one tastes like, and the way they feel when you swallow them. Torgud gagh wiggles. Filden gagh squirms. Meshta gagh jumps.
(Ezri gags.)
BASHIR: Are you all right?
...
EZRI: Bithool gagh has feet. Flush it out the airlock. All of it.
ODO: Environmental regulations.
KIRA: Why don't you just give it to Martok?
EZRI: He'd insist on sharing it with me as a point of honour. Wistan gagh is packed in targ blood. I have to go now. See you later.

I do not claim to know the difference between "squirm" and "wiggle", but those were the words Ezri Dax used to describe them.

I also know that Klingon's prefer lively, squirming gagh and racht - complaints along the lines of "this gagh is barely moving, it's half dead" are often seen. I also recall an episode of TNG -- A Matter of Honor -- where Riker sampled stewed gagh on the Enterprise, only to be surprised by the relative liveliness of fresh gagh later served to him on a Klingon ship:

RIKER: A Klingon delicacy. That's heart of targ -- this is pipius claw. And this is stewed "gagh."
PULASKI: "Gagh"?
RIKER: Serpent worms... would you like to know how they're prepared?

RIKER: This is "gagh," isn't it?
KLAG: Very good. You did some research on our nutritional choices.
RIKER: Yes... but this is still moving.
KLAG: "Gagh" is always best when served live. (covering smile) Would you like something "easier"?
RIKER: Easier?
KLAG: If Klingon food is too strong for you, perhaps I could get one of the females to breast feed you.

Not the answer you're looking for? Browse other questions tagged star-trek klingon food or ask your own question.

20
Are there in-universe explanations for how some species' appearances change between series?
10
Why are the Klingons so friendly in The Undiscovered Country?
1
Are there normal long-haired male Vulcans?
16
Why did the Klingons not react to the self-destruct countdown?
8
What is the release date order for all of Star Trek?
81
They ARE Klingons, and it's a long story... What's the story?
9
What is the story Picard is reading?
34
Why did the Klingons behave so dishonourably in Star Trek: Discovery? (Season 1, Episodes 1 & 2)
2
What about half-Klingon hybrids?