In Harry Potter, House Elves exist as short servants to the wizarding world, despite their superior control over magic. As there are no wild elves mentioned, the question of how they came to be enslaved brought the following to mind: are House Elves compatible with humans? Goblins, Giants, and Veelas are all compatible (one gets the feeling that Rowling's universe functions by D&D rules in this category) -- but are House Elves, specifically? If so, are there any examples of hybrids? 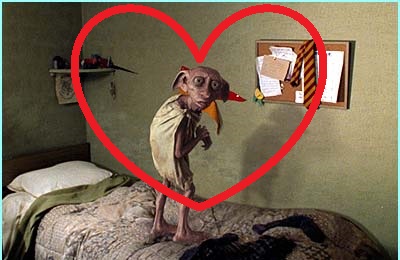 Yes, but no canon examples

Various Ravenclaws, including a prefect, seem to think this is so.

Speaking of eccentrics, you’ll like our Head of house, Professor Filius Flitwick. People often underestimate him, because he’s really tiny (we think he’s part elf, but we’ve never been rude enough to ask) and he’s got a squeaky voice, but he’s the best and most knowledgeable Charms master alive in the world today.
--Ravenclaw Prefect Robert Hilliard
(Pottermore - Ravenclaw House Welcome Message)

It should be noted that in this specific case they were wrong. ("He is human but with a dash of goblin ancestry.") However, the important thing is that several Ravenclaws, (who are supposed to be the smartest house), including a prefect, thought that a human-elf hybrid was possible.

Thanks to amarillo for pointing this out.

Elves are biologically compatible with humans.

In Fantastic Beasts: The Crimes of Grindelwald we meet Irma. The screenplay book describes her as "half-elf, half-human."

There's also mention that the circus contains a range of creatures that are hybrids.

[TINA walks past the street performers working in the open, scrutinizing them. A HALF-TROLL performs feats of strength. A few misshapen and particularly downtrodden humanoids—UNDERBEINGS without powers but of magical ancestry—shuffle around, taking money from the crowd. Horns hidden beneath hats, unusual eyes beneath hoods; HALF-ELVES and HALF-GOBLINS juggle and tumble.]

It's not clear what the other half of their ancestry is, but it's certainly possible that they're the product of human/troll | human/elf | human/goblin interbreeding.

There is a Wiki article about Part-elves, but the main point of said article is to state that:

No real part elves have been shown in canon. As such, it is unknown if they actually exist within the Harry Potter universe.

If there were any part-elves on any level of canon, it is probably okay to assume that some mention of them would be on the Wiki. On the other hand, what has been stated in canon is only a small fraction of a long history between humans and elves. In the 18th and 19th centuries, it was, (correct me if I am wrong) I believe, pretty common for white plantation owners to interbreed with slaves, or at least it did happen. On the other hand, elf-masters almost never find their elves attractive, while this can be true with human slaves.

This answer states that elves breed infrequently and only with permission from masters, but this answer, as well as the simple fact that Hagrid exists, shows that it could theoretically be possible. So the finally answer is: yes, they probably are compatible, but nobody has ever tried to find out.

We are stepping on thin ice here.

The fact that there are isolated cases of hybrids doesn't necessarily means that two different species are compatible for breeding.

In the evolution of species, it's been observed that there've been moments in evolution chain where two different species started to breed together, giving birth to a third different evolved specie. Of course, before this happens as something normal, there are strange isolated cases much time before.

And things get messier when you add to the mix magic and fantasy.

On the canon novels are there two documented cases of half-giants, and one of half-goblins. Although no one seems to feel amazed by Hagrid, we can supose that's more common to see a half-giant than we see in the novels.

While cross breeds are strange and few we only can consider them as mutants. Maybe in the far future, evolution turns this mutants into a new specie, but not today.

Applying to this reasoning, I'll say that House Elves are not compatible for breeding, as in the observable environment (canon books) we haven't seen any case of a half-breed, and even if this half-breed in fact existed, it's rarity only can be determined as a mutation (on the contrary, there would be plenty of half-breeds in the wild).

37
In the potterverse, how do giants procreate with humans?
18
How do house elves breed?