I've heard some conflicting information as to why Deadpool breaks the 4th wall, especially regarding whether it's deliberate or not.

One side I've heard:

Deadpool knows that he's in a Marvel comic book and that he doesn't exist in real life, so he breaks the 4th wall constantly because of this.

He knows he's part of a comic written by writers from Marvel, and so he deliberately breaks the 4th wall due to this. The key thing is that he knows that he's completely fictional.

The other side I've heard:

Deadpool doesn't know he's in a comic book. He thinks he's a "comic book hero" due to his insanity, so the "Merc with a Mouth" breaks the 4th wall thinking that's what he should be doing (ironically being that he actually does break the 4th wall)

Thus, everytime he breaks the 4th wall it is only his persona causing him to do so, as opposed to something the writer added in. Thus, it's somewhat paradoxical in that, while he does break the 4th wall, he only does so because he thinks he's actually in a comic book so because of that he attempts to break the 4th wall anyways much to the chagrin of his fellow superheroes.

Deadpool intentionally breaks the fourth wall because he's aware that he's fictional. He just doesn't realize what that means until the events of Deadpool Kills the Marvel Universe.

In that story, Deadpool is sent to an asylum where Psycho-Man attempts to brainwash him. This fails rather spectacularly as it instead silences his old voices and awakens a new one which starts him on a killing spree. 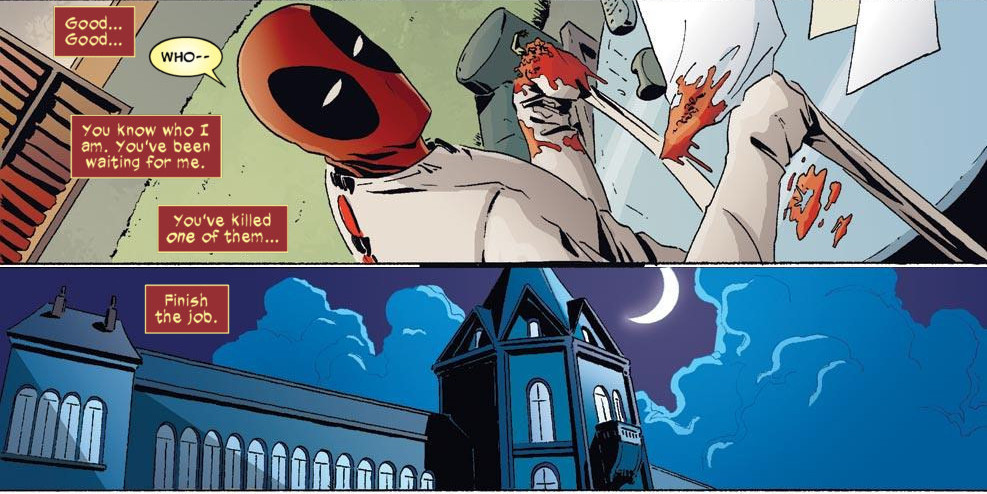 While murdering his way through the entire Marvel cast of heroes and villains it's gradually revealed that he's become fully aware of his fictional nature and believes these to be mercy killings. It's mentioned that he's always seen the reality of his fictional world but never understood it until his run-in with Psycho-Man. 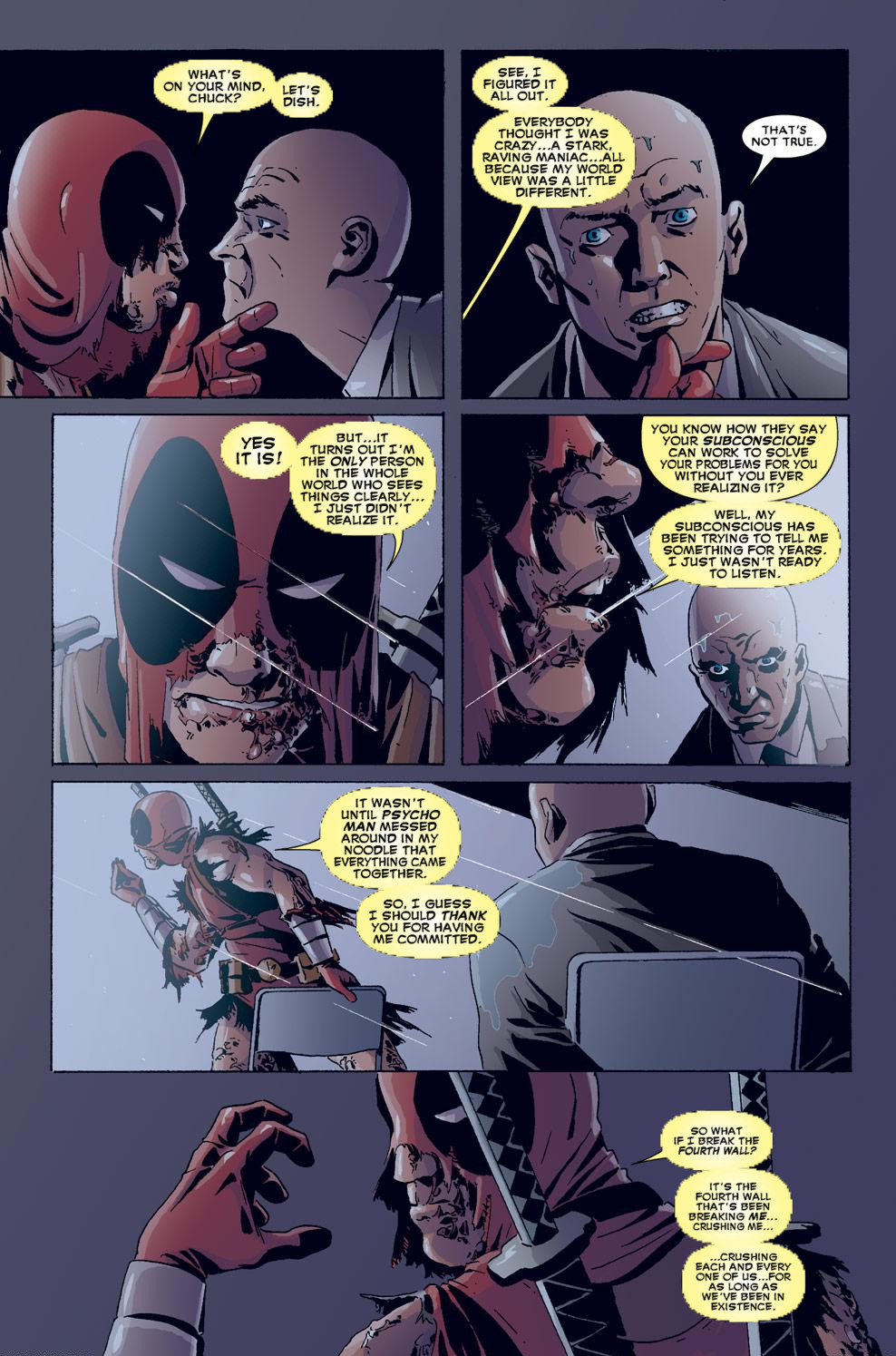 Xavier attempts to stop Deadpool by accessing his mind whereupon he realises the truth as well, going mad in the process. 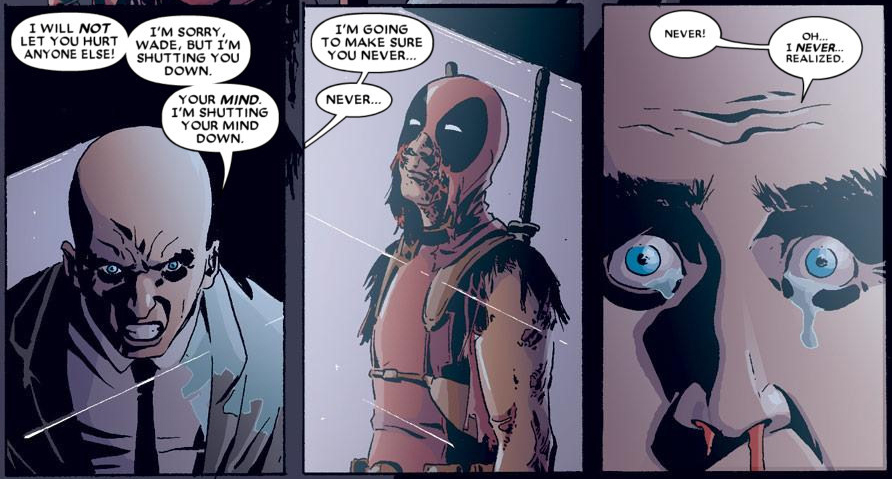 It's implied that Deadpool has always seen through the fourth wall but was powerless to do more than the writers let him, until the events of this story where he broke free of their control.

Eventually, he makes his way to the Nexus of All Realities where he crosses dimensions/planes/realities to the "real world", where the story comes full circle in the final panel: 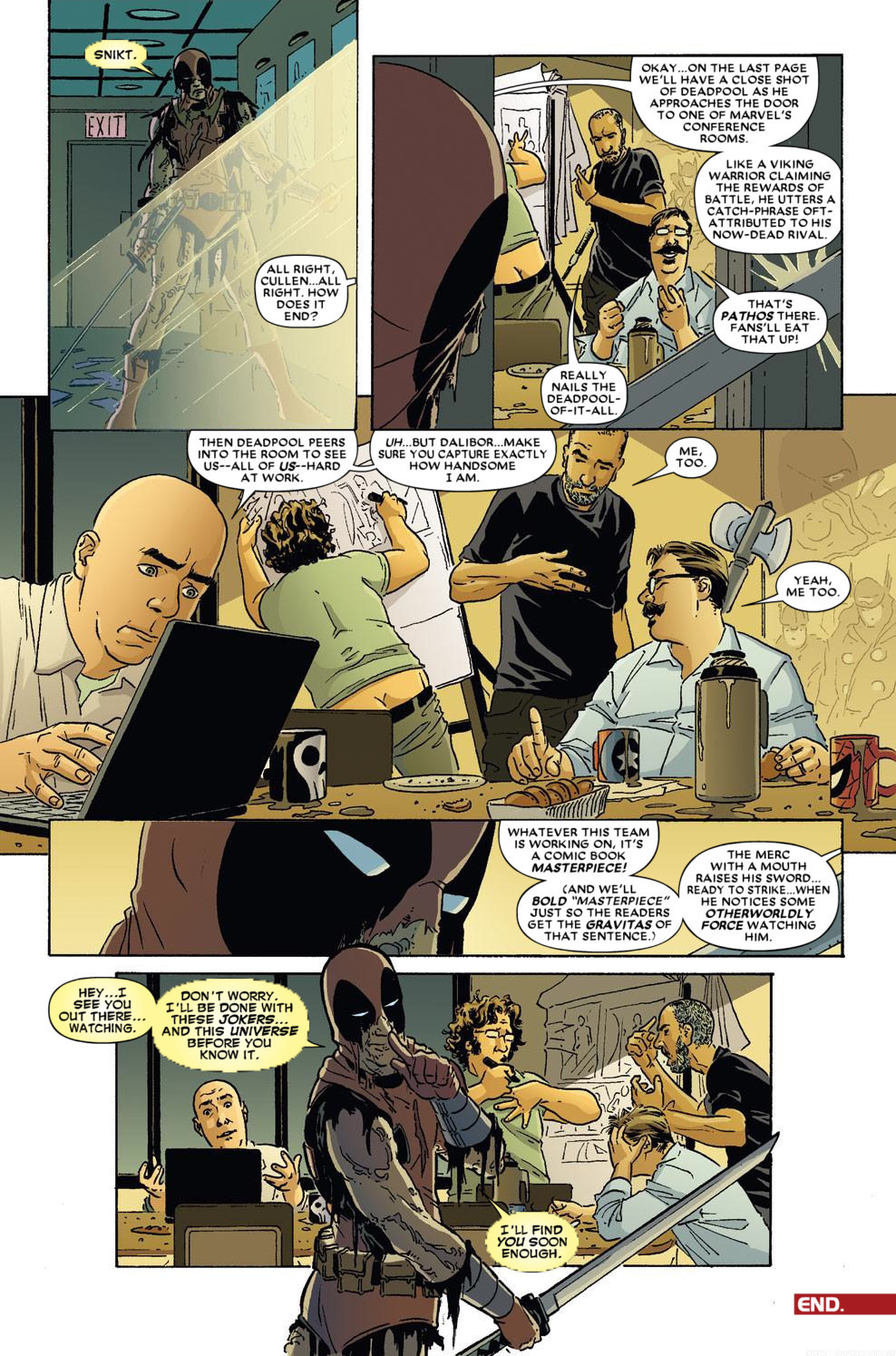 Note: I'm unaware of what is and isn't considered canon when it comes to Marvel. The claims made by The Watcher indicate that this is what happened in one of the many coexisting realities, implying that the revelations made about Deadpools insight into the fourth wall are true in most of them.

Deadpool is aware that he's a character in comic books, so when he breaks the fourth wall, it's intentional. Here's a few examples...

Deadpool finds out he's in a comic 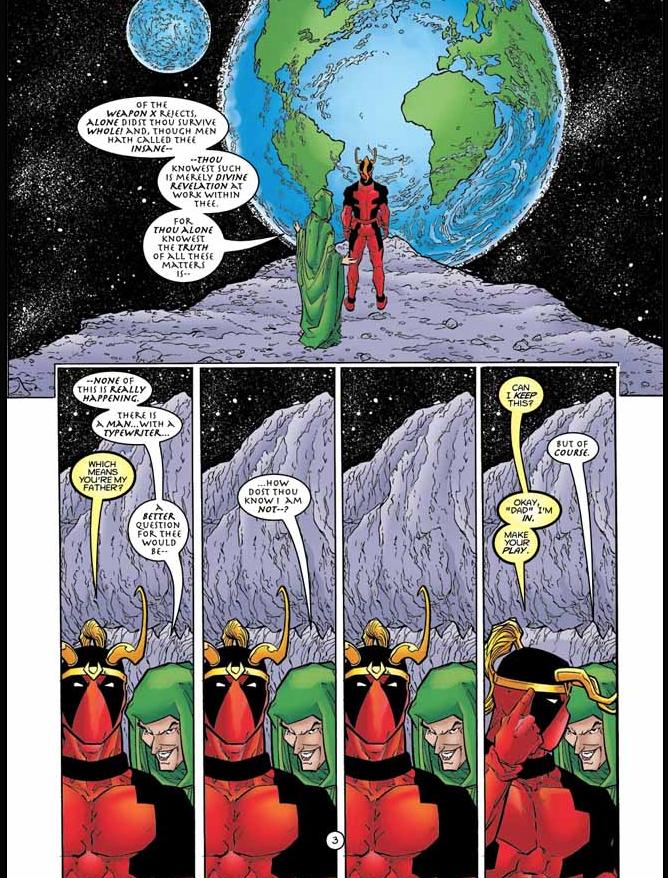 Deadpool acknowledges he's in a comic 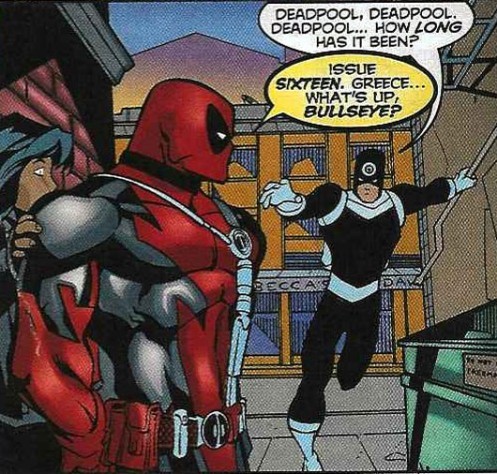 Deadpool makes reference to the people reading the comic 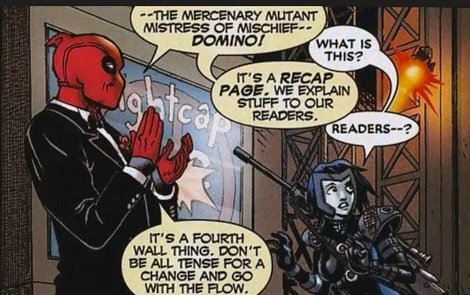 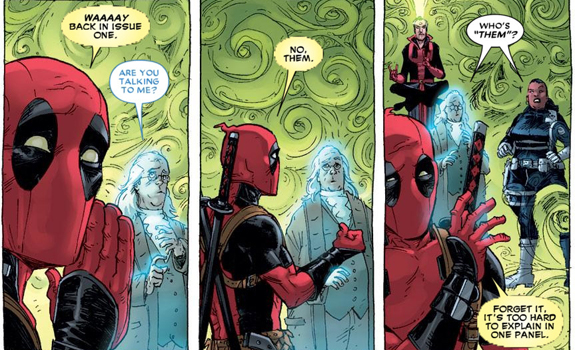 If Deadpool wasn't aware, if he was just deluded, then he would still be saying the same sorts of things, but the numbers wouldn't mesh. He wouldn't know which direction the fourth wall was in. He would be wrong, not in HIS universe, but in OURs.

It's a postmodern thing.

The story itself is an intellectual construct. The writers have one of the characters in the construct become aware of the bounds of the construct, but it's funny because Deadpool of course doesn't exist, so he is incapable of realising anything.

The writers then have Deadpool break through the bounds of the construct, implying that the reality they are creating is, in a sense, as valid as any other reality, including the one which we inhabit.

The ultimate implication is that our existence is a construct, and that the reality we perceive is one that is created, either by us, or for us. It's designed to twist our notions of what is real, which of course makes us laugh because it's amusing to blur the lines of reality.

As Deadpool is indeed playing the role of a hero in a comic book, the two options you propose are both sides of a same coin.

In the comic, Deadpool constantly violates the 4th wall rule because he's aware of being a character in a fictional work.

This resource has been used by authors for centuries in almost any art form where a 4th wall is involved (primarily theatre, tv, cinema, comic and books, but you can also find examples in painting, photography, sculpture or even music in certain operas, etc...)

So... he do it. And he does it because he knows (or believes) that he's a fictional character.

The fact is that he ACTUALLY is a fictional character. So even if an author wants to play the card that he's mad and believing something that's false you, as an spectator, are being fooled, as the thing that the author is trying to hide from you is ACTUALLY happening.

"He knows he doesn't exist" is an interesting statement since it is a direct contradiction to Descartes' cogito ergo sum. One cannot know anything without thinking. If he doesn't exist then he doesn't think or know anything, says Descartes. "Shut the f**k up, yes I do think, and anyway you're just some dead a-hole", says Deadpool.

A large part of the point of the whole routine is to subvert the notion that any fictional character, including those in Marvel's works, exists, or has knowledge or beliefs, or speaks, or takes actions. Deadpool (the work rather than the character) challenges the convenient notion of referring to in-fiction or in-canon information as "facts", because it intentionally confuses the issue of what things we're talking about when we make these statements of fact. If reading a Marvel comic actually is observing the Marvel universe, then what absurdities emerge when we consider how that universe could interact with this one?

That is one of the things you're supposed to think about, and there is not a clear-cut answer because another of the things you're supposed to think about is the invalidity of the assumption that there can be clear-cut in-fiction answers to questions about fictional characters. Sorry fans (says Marvel), there is no such place as the Marvel Universe. You can make true statements about works of fiction set in the Marvel Universe (or any ficton, such as MCU) but strictly speaking you cannot make true statements about the fictional "entities themselves" even though that is exactly the shorthand we use when talking about fiction -- "is this true in canon?" etc.

On the surface of it, the difference between "belief" and "knowledge" depends on exactly what you construe the word "knowledge" to mean, and the field of philosophy that attempts to define knowledge is called epistemology. It is not easy. There's a classical definition that knowledge is a "true, justified, belief". This has some problems and is not generally considered by philosophers to be an adequate definition, but will probably suffice as a necessary but not sufficient condition. So, is Deadpool's belief that he is fictional both "justified" and "true"?

It's certainly true "up here" in the real world. Deadpool is a fictional character. But up here in the real world Deadpool doesn't exist as a person, and doesn't "believe" anything. So that true statement is not a belief held by Deadpool. Down there in the ficton he holds beliefs, but it's not clear whether or not it's true down there in the ficton that he doesn't exist. All of our usual instincts scream that he does exist in the ficton, and therefore in the ficton his belief that he doesn't exist is incorrect. But the writers make it so plausible. Then, the comic intentionally nests fictons in order to further confuse the issue. So probably it isn't "knowledge" since it fails the "truth" criterion except when you mix and match two different contexts (reality and the Marvel ficton), between which statements like "Deadpool can think" and "Deadpool is a person" have different truth values, and between which the statement "Deadpool exists" mean different things.

As a side note, interesting consequences of treating "existence" as a property of a hypothetical entity, alongside other properties we might ascribe to hypothetical entities, were first explored in the Western tradition by Saint Anselm when he presented in 1078 the "ontological argument" for the existence of God. This is not a novel quandary ;-)

As for whether it passes the "justified" criterion: you can look for clues in the fiction as to whether (a) he is insane, and breaks the fourth wall in a "random" direction, but the "cameraman" intentionally places the "camera" in just the right place to make him accidentally correct, or (b) he has followed a reasonable logical process to conclude that he's fictional based on observations he makes. But to do this is to miss the message that this whole process of reasoning within the ficton is intentionally subverted by the work you're reading. Deadpool and the "world" he appears to inhabit behave as the authors cause them to behave, and the authors make this more obvious than usual. The ficton does not necessarily have to behave according to logical consequences of "facts" like "Deadpool is delusional" or "Deadpool is not delusional".

Seriously, the whole point is to bake your noodle, there is not supposed to be a correct answer. The reason "Deadpool breaks the fourth wall" is that artists, following the instructions of writers, draw self-referential pictures that depict a man making statements about the pictures. The reason these pictures are interesting has to do with how we experience fiction.

52
Is movie Deadpool's fourth wall breaking a "mutant power"?
15
What story is this (hero knows he's the hero)?
6
How does Deadpool break the 4th wall?