Are the Borg a species?

We see that they assimilate/absorb many different species. With that said, are the Borg themselves considered a species unto themselves?

No. The Borg are a space-faring society that consists of a wide variety of different species that have been assimilated into the Borg Collective. Whilst these assimilees (is that a word?) share some common machine elements, they retain their own unique physical characteristics.

You could think of the individual drones as being infected by a particularly virulent machine-parasite that controls their actions. It is especially noteworthy that after these machine parts have been deactivated, the drone regains its original biological status and physiology 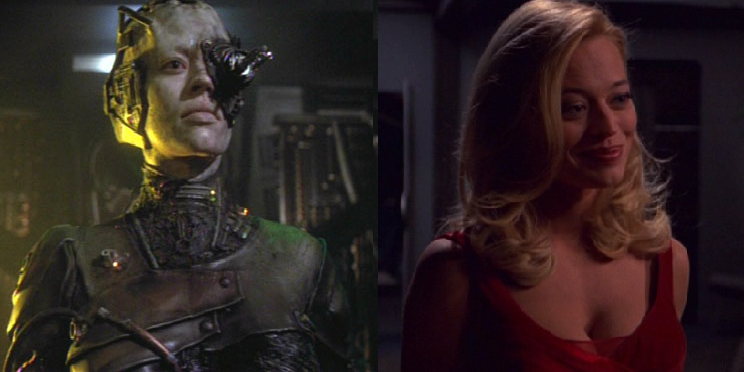 That being said, the Borg Queen (in Voy: Dark Frontier) strongly indicates that to become Borg is to transcend one's original species

QUEEN: We all originated from lesser species. I myself came from species one two five. But that's irrelevant now. We are Borg.

SEVEN: I am an individual.

Using biological terms, no, the Borg are a collection of mechanized and technologically co-opted individuals who share a unique hive-mind consciousness composed of different organic components.

Using this first definition the Borg cannot claim to be a species unless the nanoprobes which comprise the original and only similar technology which binds them together were, in fact, a unique living intelligence.

Under the second definition, the nanoprobes might be considered a species with the controlled organics as little more than platforms to be used to move and build resources for the nanoprobes.

However, the series has never differentiated the nanoprobes as the intelligence behind the Borg, only as a unifying element used to convert and then subvert the intelligence of the creature being absorbed. Once such elements are removed, the individual is restored to its normal cognitive function.

Determining whether two organisms are a member of the same species is very difficult, even on Earth. This is known as the species problem:

The species problem is a mixture of difficult related questions that often come up when biologists define the word "species". There are a wide range of approaches to defining how we identify species and how species function in nature; each approach is known as a species concept. The number and types of species concepts which exist are constantly changing, but there are at least 26 recognized species concepts. Biological reality means that a definition that works well for some organisms (e.g., birds) will be useless for others (e.g., bacteria) particularly due to concerns regarding if the species reproduces asexually or sexually. The scientific study of the species problem has been called microtaxonomy.

One common, but sometimes difficult, question is how best to decide which species an organism belongs to, because reproductively isolated groups may not be readily recognizable, and cryptic species may be present.

There is a continuum from total reproductive isolation to panmixis. Populations can move forward or backwards along the interbreeding continuum, at any point meeting or failing the criteria for different species concepts. Thus, it is difficult to define reproductive isolation. Some separately evolving groups may continue to interbreed to some extent, or begin interbreeding again after a period of isolation, and it can be a difficult matter to discover whether this hybridization affects the long-term genetic make-up of the groups.

Many of the debates on species touch on philosophical issues, such as nominalism and realism, as well as on issues of language and cognition.

In other words: it depends who you ask. There are at least 26 different ways to define species just here on Earth, and I would imagine the concept getting even more muddled if we introduced alien evolution into the mix.

For example, one way to define a species is this: if two organisms can reproduce, then they're part of the same species. This is just one definition. But that doesn't really help in the Star Trek universe: since humans can reproduce with Klingons and Vulcans and many other aliens, does that mean we're all part of the same species? What about "parallel evolution" (which happens a lot in Star Trek) where two populations evolved separately, but ended up identical? Are they the same species? The answer is it's complicated and it depends how you define species. There isn't a single simple definition, so there isn't a single simple answer.

This is further complicated by the fact that an original alien race seeded the universe with DNA, but this answer is already too long.

The point is, talking about species is a lot like talking about color: it's a bit more fuzzy and analog than you might expect. There are infinite gradations between two things, and an infinite number of ways to draw a line. When does green-blue start being blue-green?

Back to your question about the Borg: it's complicated and it depends. We can't even say for sure where we draw the line here on Earth. If we start talking about the different aliens in Star Trek, then that's even more complicated.

However, I would say no, the Borg are not all a single species. The reason I say this is: the Borg have assimilated many organisms over many many years. I would think that in all of those organisms, you'd be able to find at least two who belong to different species no matter how you define species. I don't think that's ever been explicitly shown on screen (especially given the muddled question of whether two alien races who can breed should be considered the same species) though.

Of course, this depends on how you define species (which is a gray area), and it might be even further muddled by Star Trek technobabble about the Borg using nanobots to convert assimilated organisms into one Borg species (even if they still look good in a dress). There it goes being complicated again.

Species are irrelevant. Your biological distinctiveness will be added to our own. Resistance is futile.

Joke aside: according to our present definition of species, the Borg are not that. However... they point to a problem in the definition. They can propagate their "distinctiveness" with frightening efficiency, whereas species are limitied in that scope to mere genetic reproduction.

So the question should perhaps be this: considering the Borg, do we need to expand the concept of "species "? Should we supercede it?

species: Biology: A group of closely related organisms that are very similar to each other and are usually capable of interbreeding and producing fertile offspring.

Wikipedia's article on Mule states: "Sterile hybrids are not species in their own right."

Far as we know, due to technology's interference, the end result is this:
Borg are not usually capable of producing fertile offspring.

20
The Borg uses many numbers as species designation, who were Species 1?

24
Did The Cybermen influence the creation of The Borg?
31
Why are there no non-humanoid Borg?
27
Why do the Borg need to assimilate entire species?
18
Why are there so many human Borg?
4
Are the Borg considered 'living' within the Star Trek universe?
5
How are Borg Ships constructed?
48
Why do the Borg announce themselves?
13
Have the Borg ever destroyed a species rather than assimilate them?
39
Do the Borg have any plans after assimilating all they want?
5
Can the Borg suffer from STDs or other diseases present in the blood?