What did Christopher Tolkien mean by "Tolkien's fifteenth invented language"?

I know this question would usually raise other questions as to what is considered a separate language (e.g. Qenya/Quenya, Gnomish/Sindarin, etc.).

The thing is that somewhere there is an official list. Quoting from the flap of Sauron Defeated:

Closely associated with the Papers is a new version of the Númenórean legend, The Drowning of Anadûnê, which constitutes the third part of the book. At this time the language of the Men of the West, Adûnaic, was first devised - Tolkien's fifteenth invented language. The book concludes with an elaborate account of the structure of this language by Arundel Lowdham, a member of the Notion Club, who learned it in his dreams.

Note: accents added to source which incorrectly strips them on both Amazon and Google books; accents are correct in the title, so this is undoubtedly inadvertent.

So there is an official list. What were the first fourteen? How many were made after Adûnaic?

What is the official order that makes Adûnaic Tolkien's "fifteenth invented language"?

In case this isn't clear, I'm looking for an official statement or indication as to which list Christopher employs. I'm not looking for speculative opinion-based answers.

The original listing of these languages is so much more complicated than this, because Tolkien always changed or created new dialects.

Tolkien's glossopoeia has two temporal dimensions: the internal (fictional) timeline of events described in The Silmarillion and other writings, and the external timeline of Tolkien's own life during which he continually revised and refined his languages and their fictional history. He constantly devised and changed the languages and their chronological order changes in real time.

Tolkien had worked out much of the etymological background of his Elvish languages during the 1930s (collected in the form of The Etymologies). In 1937, he wrote the Lhammas, a linguistic treatise addressing the relationship of not just the Elvish languages, but of all languages spoken in Middle-earth during the First Age.

But first creation of these languages (which makes the chronological order in some sense) looks like this: 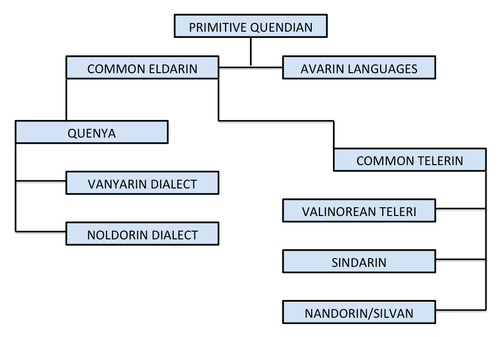 Most of the "first 15" include sub-languages and dialects as well. So if you include them all, Adûnaic cannot be listed as the 15th language because it is a sub-language-like language that was derived from the Hadorian tongue. It is under Taliska language branch but I listed it as the 15th. Because even if it's a sub-language or a dialect, if it's talked by masses it is considered as a language.

The language of the House of Beor eventually was almost extinct, both because of the adoption of Sindarin and because the House was mostly annihilated after the Dagor Bragollach. On the other hand, the House of Hador did not wholly abandon their language, it survived the War of Wrath and was still spoken when the Edain migrated to Elenna. Thus it later became Adûnaic.

Adûnaic, the language of Númenor, developed in 1946 while he was finishing up Lord of the Rings, was said to be his fifteenth invented language. 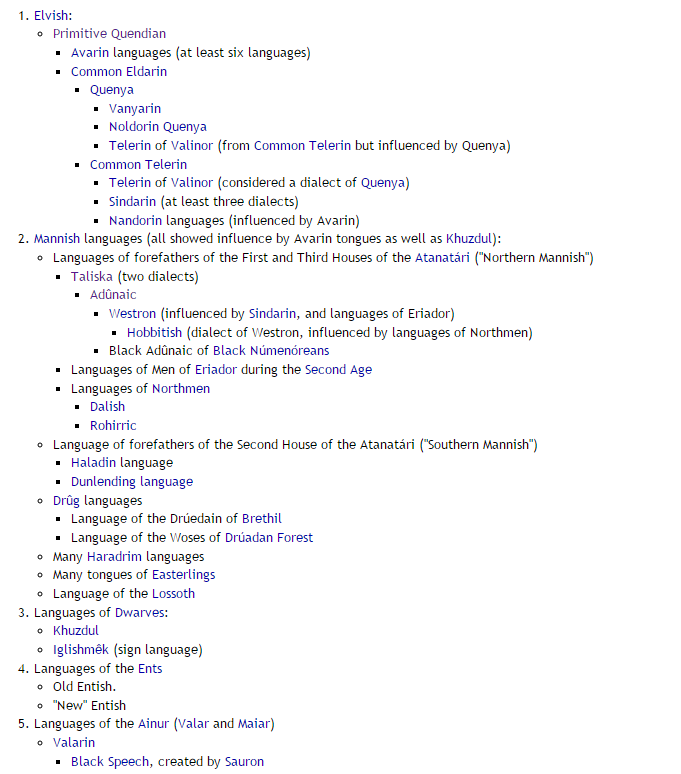 You can see the language tree here.

Creation of languages didn't happen in chronological order of the stories and books. Tolkien simply did that when he was in need of a new language.

Adûnaic was generally considered to be a language of less prestige than the Elven tongues. Most locations of Númenor, and most of the lords and ladies of the Dúnedain, had also Quenya or Sindarin names beside their native ones. Even most commoners knew Sindarin to some degree.

Adûnaic was derived from the Hadorian tongue, related to the Bëorian—collectively called Taliska. It was more distantly related to the languages of the Middle Men of the east, such as the Northmen.

During the First Age these languages were much influenced by Khuzdul, Avarin, but also by the languages of the Eldar, as the Elf-friends spoke Sindarin.

Taliska was not related to the Haladin tongue at all, therefore when the Númenóreans returned to Middle-earth in the Second Age, they did not recognise the peoples of Enedwaith and Minhiriath as their distant kin, who spoke unrelated languages.

You can visit here for a language analysis of the 15th language.

When The Lord of the Rings had still a long way to go - during the halt that lasted through 1945 and extended into 1946, The Return of the King being then scarcely begun - my father had embarked on a work of a very different nature: The Notion Club Papers; and from this had emerged a new language, Adunaic, and a new and remarkable version of the Númenórean legend, The Drowning of Anadûnê, the development of which was closely entwined with that of The Notion Club Papers.

How is all this to be equated with his statement in the letter to Stanley Unwin in July 1946 that 'three parts' of the work were written in a fortnight at the end of 1945? Obviously it cannot be, not even on the supposition that when he said 'a fortnight' he greatly underestimated the time. Though not demonstrable, an extremely probable explanation, as it seems to me, is that at the end of that fortnight he stopped work in the middle of writing the manuscript E, at the point where The Notion Club Papers end, and at which time Adunaic had not yet arisen. Very probably Part One was at the stage of the manuscript B.4 On this view, the further development of what had then been achieved of Part One, and more especially of Part Two (closely associated with that of the Adunaic language and the writing of The Drowning of Anadûnê), belongs to the following year, the earlier part of 1946.

Addition: Since the OP insists on the existence of a chronological list of invented languages, made by Christopher Tolkien, I double-checked my copy of the volume. Couldn't find one (if you find any, please share it with a page number or some sort of referable source). But the book examines and tells the story of a newly discovered language called Adûnaic.

Not the answer you're looking for? Browse other questions tagged languages tolkien-languages j-r-r-tolkien christopher-tolkien or ask your own question.

21
Were there Gnomes in any of Tolkien's works?