How far did Scotty beam himself and Kirk?

According to this answer:

During the 22nd century, standard Earth transporter systems had a range of 10,000 kilometers

In the Star Trek reboot, Scotty manages to transport himself and Kirk aboard the Enterprise while it's traveling at high warp.

So in the time it took Scotty's finger to depress the button to activate the transporters, the Enterprise has traveled some ridiculous distance I can't figure out in my head.

Can anyone tell me roughly how far Scotty beamed himself and Kirk?

I've listened to Scotty's explanation several times, but it's not really helped...

Best guess, the Enterprise had traveled approximately 0.0005 of a light-year (or approx 5.3 million kilometres).

This is based on the known last speed of the Enterprise on course to the Laurentian System (warp 3), the known conversion between warp speed and c (e.g. the speed of light) and the amount of time that transpired between Kirk being marooned and the beam-out (approximately 10 minutes in realtime).

Note, please, that Kirk could have been unconscious on the surface for much longer. We simply don't know how long he was down there, potentially resulting in the figure above being out by many times.

From the helm Sulu looked over at the straight-backed figure standing at command. It was a relief to be able to break the silence with something as straightforward as a status report. 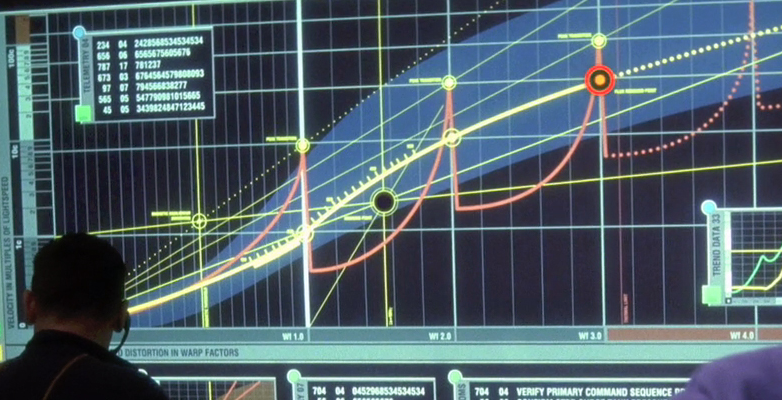 Within the novelisation, Scott merely describes it as a "considerable distance".

“Even if I believed ye, that I’m the genius who wrote that code—and I’ve plenty o’ confidence even in a version of meself that hasn’t happened yet—we’re still talking about slingshottin’ onto a ship travelin’ at warp speed that by now is a considerable distance from here. And one without a properly activated receiving pad or engineering team awaitin’ us. It’ll be like tryin’ to intercept a bullet with a smaller bullet. Blindfolded. While ridin’ a horse.”

Not the answer you're looking for? Browse other questions tagged star-trek star-trek-2009 star-trek-transporter or ask your own question.

11
In Star Trek canon, what's the range of operation of Transporters?

29
Why did Scotty think Capt Kirk was alive?
25
How fast can impulse drive propel a ship?
3
Could the Quadros 1 probe have been launched in 2193?
21
How old was Porthos when Scotty killed him?
5
How and when/where did Jim Kirk learn to code?
7
In Star Trek IV: The Voyage Home, how did Kirk and Gillian successfully beam aboard the Klingon ship together?
34
In Star Trek, how fast is warp 9.99?
8
Origin of 'Beam Me Up Scotty'
15
How did the transporter malfunction in "Star Trek: The Motion Picture"?