Are Roland's revolvers single-action or double-action?

In Stephen King's The Dark Tower series, the main protagonist, Roland, carries a pair of ancient revolvers. Perhaps because King admittedly knows nothing about guns, the descriptions of the guns' behavior varies from one situation to the next.

For instance, sometimes the guns are cocked before firing; sometimes they are not. Sometimes Roland (or other members of his ka-tet) "fan the hammer" (although King calls this "fanning the trigger", for some reason). For those who aren't aware, "fanning the hammer" is when you hold the trigger down on a single-action revolver, then rapidly strike the hammer to fire as rapidly as possible.

Double-action revolvers are more complex in design, but mostly easier to use. When you want to shoot, you simply pull the trigger (although you CAN cock the hammer like a single-action, you don't HAVE to). Pulling the trigger does all the work: the cylinder rotates; and the hammer draws back, then swings down onto the shell. You cannot fan a double-action revolver, and you don't really need to.

Is there any clear, compelling evidence that Roland's guns are one or the other - either single-action or double-action?

King gets the trigger and hammer mixed up all the time. With that and your quote about Roland fanning the 'trigger', that sounds like it's a single action.

Furthermore I've not read any description of his revolvers that would make it obviously one of these over the other:

I'm reading Marvel's The Dark Tower comics for the first time, and in the miniseries The Gunslinger Born, I found this tidbit, which clearly states that gunslingers carry single action revolvers: 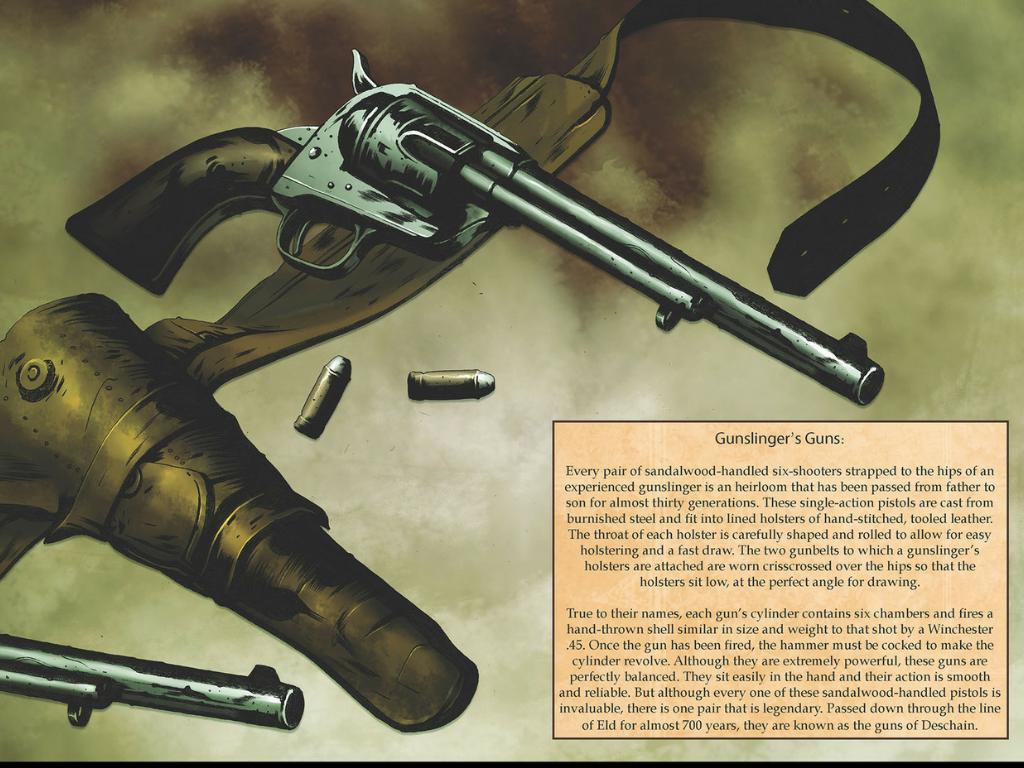 Every pair of sandalwood-handled six-shooters strapped to the hips of an experienced gunslinger is an heirloom that has been passed from father to son for almost thirty generations. These single-action pistols are cast from burnished steel and fit into lined holsters of hand-stitched, tooled leather. The throat of each holster is carefully shaped and rolled to allow for easy holstering and a fast draw. The two gunbelts to which a gunslinger's holsters are attached are worn crisscrossed over the hips so that the holsters sit low, at the perfect angle for drawing.

True to their names, each gun's cylinder contains six chambers and fires a hand-thrown shell similar in size and weight to that shot by a Winchester .452. Once the gun has been fired, the hammer must be cocked to make the cylinder revolve. Although they are extremely powerful, these guns are perfectly balanced. They sit easily in the hand and their action is smooth and reliable. But although every one of these sandalwood-handled pistols is invaluable, there is one pair that is legendary. Passed down through the line of Eld for almost 700 years, they are known as the guns of Deschain. - The Dark Tower: The Gunslinger Born, Robin Furth

1Ancient Sword Rage's answer was posted before this one, and it is correct, so I accepted his, but posted mine so that all the information is available. I offered him this picture, but he thought it would be improper to use information I provided, and told me to post it as a self-answer. Please consider upvoting his answer.

2I think this shows us another example of King's lack of knowledge of guns. The assertion that gunslingers use Winchester .45 ammo ignores the facts (as I understand them) that in the 19th century, when guns like this were made, Winchester .45 cartridges were ammo for rifles, not pistols, and although Winchester now makes .45 ammo for handguns, it is designed for semi automatic handguns, and can't be used in revolvers without special adapters called "half-moon clips". The descriptions in the books make it clear that Roland isn't using these clips.

Not the answer you're looking for? Browse other questions tagged weapon stephen-king the-dark-tower or ask your own question.

32
Shouldn't Darth Maul's double bladed lightsaber have broken?
12
When someone tries to fire Roland's pistol he nearly breaks his arm. Just what exactly does the book mean when it says "pistol"?
9
Why are there cover art variations in the Plume trade paperback edition of The Waste Lands?
20
Are we the Great Old Ones?
13
What are all the differences between all the editions of the first book of the Dark Tower series?
4
Why didn't Eldred Jonas take Roland's guns?
9
What does it take to make it onto Roland's list?
2
Crimson King's role in Roland's Ka
17
Is it possible to construct a multi-colored double-bladed lightsaber?
8
Are any of Stephen King's works not connected to The Dark Tower?