Why did they choose Jar Jar Binks as the Gungan Representative of Naboo?

Now, we all know the out of universe reason for Jar Jar's ongoing existence, but apart from "he was friends with the Senator and a few Jedi", why would Naboo have risked putting Jar Jar in front of the Galactic Senate as the Gungan representative for Naboo?

In the movies and in every episode of The Clone Wars in which he appears, he does something stupid and by pure dumb luck manages to survive or achieve some random success with his clumsiness rather than any skill as a statesman.

In-universe, I can't see any planetary government wanting him to be the representative for his species. There surely are far more qualified and capable Gungans who would be a far better choice. Jar Jar could have been given some local fiefdom for his part in the liberating of Naboo.

So my question is, What in-universe reason would there be for Naboo choosing Jar Jar Binks to be the Gungan Representative in the Galactic Senate?

According to the Star Wars: Attack of the Clones - Visual Dictionary, Jar Jar was regarded as a war hero as well as the ambassadorial genius who brokered the new agreement between the Naboobians and the Gungans. His "simple heart" and a "tide of goodwill" elevated him into a role far beyond his capabilities. 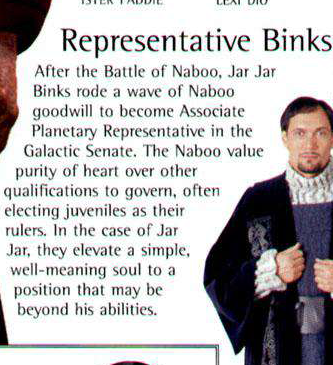 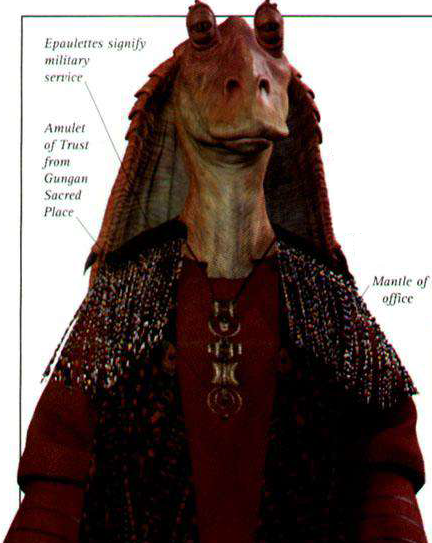 53
Does The Character of Jar-Jar Binks Serve An Actual Purpose in Star Wars?
17
Was there really hype around Jar-Jar Binks before the release of The Phantom Menace?
22
Could Jar Jar Binks live long enough to appear in the next Star Wars trilogy?
12
Why did Jar Jar vote differently than Amidala would have?
14
Why is Jar Jar Binks in Star Wars: Clone Wars?
66
Why did the Jedi serve a corrupt Republic?
7
Had Darth Sidious foreseen that Jar Jar Binks would provide assistance to Qui-Gon, Obi-Wan, and Queen Amidala on the planet Naboo?