In the movie Stargate: Continuum, is there an in-universe explanation about why and when Ba'al's failsafe plan was triggered, and why there was a delayed timeline ripple as individuals disappeared at slightly different times? It's been a while since I've seen it, but I believe Vala Mal Doran disappeared first, followed by Teal'c, followed by others at the ceremony. Even if my memory is faulty about Vala going before Teal'c, the other SG-1 members don't disappear, allowing them time to escape through the Stargate.

Obviously, from an external plot-driven perspective, it is more dramatic to have sequential disappearances, and there wouldn't have been a story if the other SG-1 members had also vanished, but is there a canonical, in-universe reason? Also, how did the original Ba'al know that it was time to trigger his failsafe plan and when did he initiate it—before the ceremony, after the team and Jack O'Neill gated in, or at some subsequent point? I can accept the concept that a time change might propagate at a finite speed through the timeline, but Vala, Teal'c and the rest of SG-1 shared the same frame of reference in the timeline and, as far as I can tell, everyone should have disappeared together. 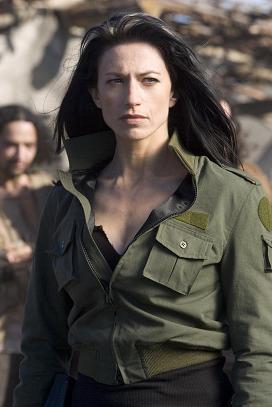 I'm going with the idea that the people vanished in the order their lives were changed: you see Cam affected last, which would make sense if the Achilles sank/didn't sink in 1939. Teal'c is around 120 now: if Ba'al picked him up after his father's death, he had to do it over a century ago. Vala becomes host to Qetesh much later: Qetesh herself indicates that Ba'al acquired her some 50 years ago, and since Vala was his enemy, not Qetesh, we can assume Qetesh has had the same host for all that time.

Not the answer you're looking for? Browse other questions tagged movie time-travel stargate timeline or ask your own question.

18
Does the television series Stargate SG-1 show any evidence of Cameron's time travel affecting the original timeline?
83
Time Travel story where an imprisoned psychopath kills people from his past?
6
Time travel episode from 1970s
31
Wouldn't the stargate addresses from Earth be different?
8
Animated movie with time travel and where people where enslaved in mines
5
TV movie: people travel back in time to see disasters
2
Looking for a time travel movie from 70's or early 80s
3
Earliest known story involving time-travel within a self-consistent timeline?