Trying to identify zombie movie from 80's or 90's

I'm trying to find the title of a movie from the 1980's or early 1990's that released in the US. It was a serious movie with more of an action vibe than straight horror - very Resident Evil-ish.

In the film, a facility of some kind - located outside a small town - goes into lockdown mode after a contagion gets released. As the government surrounds the facility and contemplates how to kill the contagion, the local sheriff sneaks into the facility in order to rescue his girlfriend or wife, who was an employee in the facility when it locked down. The contagion has turned everyone inside into zombie-like creatures, but the sheriff finds the girlfriend unaffected despite many close encounters with the zombies. In the end, it turns out that she's unaffected because

she's pregnant, and the hormones produced by her body render her immune.

Does this ring a bell with anyone?

Further Info: The sheriff was a Caucasian man in his late 30's or 40's with short dark hair - kind of a rugged looking guy. The girlfriend/wife was a Caucasian woman in her 30's or so with a short tomboy-ish haircut and dark hair. I could be wrong but I think the GF was a security officer at the facility. 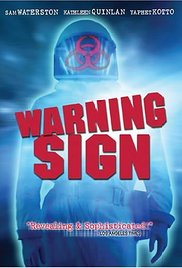 The movie tells about the outbreak of a virulent bacteria in a secret military laboratory operating under the guise of a pesticide manufacturer. During routine work a sealed tube is broken, releasing the secret biological weapon. Where upon detecting the release of the agent, one of the plant's security officers activate "Protocol One," a procedure sealing all of the workers inside from the outside world and they are left to wait out the deadly effects. A local County Sheriff whose pregnant wife, the security officer, is trapped inside, and with the help of a past employee who is a known alcoholic, must fight through a government agency and the chemically affected workers to find his wife and put a stop to the spread of the lethal weapon. The former employee had started creating an antidote to the weapon, which the sheriff and his wife create and deploy.

It has a locked-down facility outside a small town and a sheriff trying to rescue his pregnant wife.

Not the answer you're looking for? Browse other questions tagged story-identification movie zombie or ask your own question.

8
Story Identification - zombie movie on a ship
1
3D animated film with flying motorbike racer and aliens in mech-suits
14
Zombie Outbreak movie with a cure
0
Looking for an old zombie movie from 80s
7
Trying to identify a high fantasy movie on the SyFy channel, two women accidentally bewitch men?
5
Name of a sci-fi film from the 1980s that opens with an astronaut being killed by an alien that takes the form of a beautiful woman?
4
80s/90s zombie movie: zombie studied in a military facility fakes sleep when injected with freezing “tranqs”
1
I'm searching for the name of a zombie movie