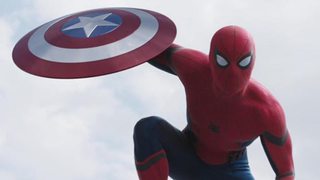 Something about his movements during the film seemed like they were CGI to me. For example, it seemed like CGI when he hopped onto that vehicle in the airport fight scene. Do we know whether that was an actor in a suit or a CGI model?

Spider-Man is completely CG, like most of the rest of the airport scene

According to this Verge article by Bryan Bishop, "That massive airport fight in Captain America: Civil War was almost entirely digital" (May 12, 2016), footage of actors was mainly used for characters who had exposed faces. Masked characters, and even the environment, were rendered using computer graphics.

A real suit was made, but you don't see it in the film

When photography on Civil War began, it hadn’t been decided how the character would actually be realized, and a camera-ready Spidey suit was built for the shoot. (A parkour artist played the role during shooting, as actor Tom Holland hadn’t even been cast yet.) When the decision to go all-CG was made halfway through the shoot, it fell to Earl and his team to create the definitive Spider-Man.

"Our suit had to look and feel real," he says. ILM and the Russos collaborated with Marvel’s own visual development group and Marvel Studios head Kevin Feige to workshop how the character should look. "We did a lot of tests and studies to hone in. The suit is designed by Stark, so he’s sort of one-upped it a little bit — so how do you bring the Stark tech look into that suit? And obviously, we wanted it to feel like real world materials, and not do anything that was out of that realm. It needed to feel like it was a photographed suit."

To bring it to life, they used a layered process: a cloth simulation handled the fabric, which ran atop a muscle simulation that provided the look of Peter Parker’s body. (Body scans from Tom Holland served as the basis.) The character was animated like any digital creation, but in Civil War, there’s a teenaged kid inside that suit, and it was up to Holland to provide the performance. The actor performed every line, moment, and beat in the film, captured by motion-capture and reference cameras, with those performances then integrated into ILM’s animation. And to avoid the stiff, inexpressive look that Spider-Man’s face has had in some previous film incarnations, the visual effects team devised a version of the mask that stretched when he spoke. "How much does the fabric slide, how much does it stretch, how much do we see his jaw motion? Adding intricacies, like the camera irising to the eyes themselves, so we could get a little bit of movement in the eyes. There’s a lot of little subtle things that all add up to making him feel like he’s there, and part of the team."

(bolding in these quotes was added for emphasis, and is not in the original text)

The suit is real.

The newest (this is the 3rd time in 14 years, it's hard to believe they will ever stop) Spider-Man costume is very different from the previous two. It highly resembles the comics in design.

It looks awesome. I’ve seen a lot of design work that’s been done on the costume. I think there are elements of it that are really going to blow people away, where they are going to go ‘Ah, that’s Marvel doing Spider-Man.' - Source

You can also find on (supposedly belonging to) Russo Bros' Twitter account that they shared some details from the suit. 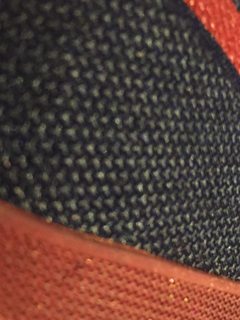 But people seem to take the picture not seriously (some say this is from a basketball). Because there was another one that resembled a coffee mug.

A few months ago Marvel Studios President Kevin Feige said the suit was "different than any of the ones that have come before."

I was more involved in the Raimi ones, and think they did a very good job. But that being said, we’ve already designed the costume, which is different than any of the ones that have come before. And yet ours is classic Spidey, as I think you’ll see. - Source

As you probably realized the eyes of the suit is CGI, because they are expressive which is a first in any of those previous debuts. Also the logo on his chest is different (smaller). And there is some sort of belt around the waist. 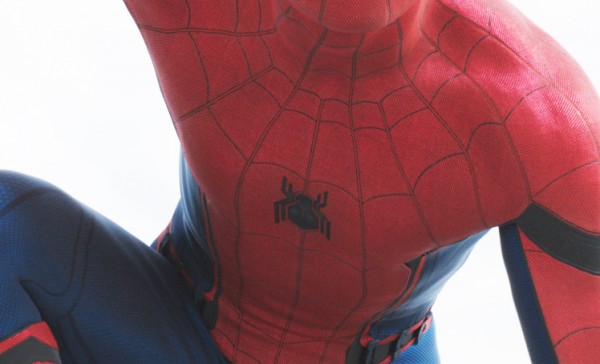 I do not remember the source but I watched an interview few weeks ago and it was said some CG applied to improve the suit. So I take it as "the suit is real, some improvements were done with CGI."

Anyway, I believe Tony (Stark) is behind the creation of this suit (to lure Peter Parker in). 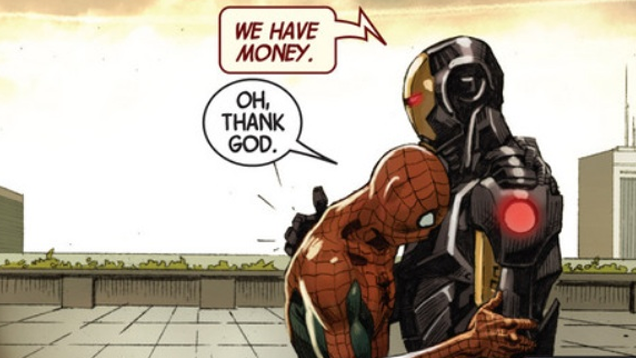 After seeing Civil War, Tom Holland was wearing a real suit.... for the most part.

After the big 15-minute-showdown, Spider-Man is laying on the floor, mildly injured, with his mask half-off his face, and Tony Stark comes up to him and helps him up. He tells him that he's done, and the fight's over. He then drops Spider-Man back on the ground, and Peter tries to put the mask back on his face.

So to me, the suit was real in at least one scene. I may be wrong. We'll have to find out more when Marvel Studios shows more behind-the-scenes footage of Civil War.

Yes it is CGI, If you look closely, that scene where he is halfway removing the mask, even his neck and lower jaw skin looks CGI, there's a reason we don't see Tom Hollands face at all at the airport fight. My guess would have to be, Spiderman is all CG in Captain America: Civil War

the answer is YES, IT IS CGI.

The suit having high res texture doesn't mean jack on this subject, you simply can't tell if something is real or not based on the amount of details or texture there is in an object, knowing what computers and the artists can do nowadays.

Now, if you'd like to know about the rest of the movie, I can tell because it has already been released here in Brazil and I've actually watched it, so I'm not just guessing. Continue reading at your own will.

Okay, so it is really dificult to tell by just seeing this particular scene, but it gets much easier to know the truth when you see the way the "fabric" behaves in some close shots with slower movements and when spidey moves his jaw to talk.

There is one scene in particular that makes it obvious that the suit is CGI. In the scene Tom Holland is getting up off the floor in the airport fight and his mask is halfway lifted. You can see a portion of his face, with one eye being covered up by his mask. From the the very first glimpse you can tell that the everything from the neck down is CGI, but the mask is real(in this particular scene only, whenever he's on his full suit with the mask down, it is always CGI).

Now, I have no doubt that they used MoCap to capture Tom's movements in this scene and in many others, it is cool to see it. But that is pretty much what makes it so easy to tell that there is NO physical Spider man suit in this film. There is no reason for them to use MoCap and a CGI suit in a scene with no action at all like this one, it just doesn't make any sense.

So, there is a real mask (with eyelenses that don't move, obviously), but unfortunately there's no suit yet.

Probably because they didn't have the time needed to experiment with materials and colors. The Russos' twitter pics where probably from a costume study and early suit experimentations for the Spider man Homecoming.

Not the answer you're looking for? Browse other questions tagged marvel-cinematic-universe spider-man behind-the-scenes marvel captain-america-civil-war or ask your own question.

28
Is The Amazing Spider-Man part of the Marvel Cinematic Universe?

14
What authority does Tony Stark have to claim back the shield of Captain America?
73
How was Spider-Man persuaded to join the side he did?
13
Why didn't Spider-Man's spider-sense detect Ant-Man's attack?
13
What purpose did the hologram technology serve in Civil War?
18
Is Ant-Man referring to any specific incident?
15
On Pepper Potts and Tony Stark's relationship
5
Was this incident in Captain America: Civil War officially confirmed to be a consequence of Spider-Man’s Spidey sense?
25
Is there ever any indication in the MCU as to how Spider-Man got his powers?
12
Why didn't Tony put a parachute in Rhodes suit but put one in Peter's suit?