Why did a dwarf ride Kirk like a pony?

In the Stark Trek TOS episode "Plato's Stepchildren" the telepaths forced a dwarf to ride Kirk like a pony. 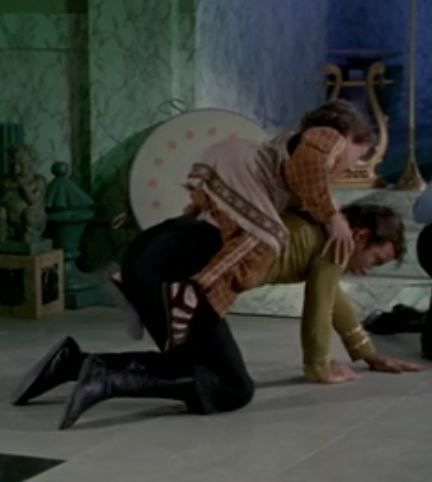 I understand that they wanted McCoy to stay on the planet as their doctor, however given that the telepaths were also able to control the transporter and the Enterprise itself, why did they not simply get rid of Kirk and Spock in any way they chose? Why the need to humiliate Kirk and Spock?

The purpose of the entire exercise in humiliating the Enterprise officers in front of McCoy was to break his resistance to serving The Platonians willingly, as a skilled physician. While they were fully capable of forcing other life forms to act as puppets, this doesn't include tapping the skills of the subject as part of the puppetry.

If it had been in line with their goals, they could likely have destroyed The Enterprise or otherwise rid themselves of the rest of the crew as you suggest, but this would remove their main leverage in influencing McCoy.

This is corroborated by the episode's dialog:

KIRK: No. You're the doctor. They don't want to force you. They need your goodwill. They're trying

PARMEN: Captain, go while you still can.

KIRK: We're not leaving until McCoy is released.

PARMEN: This is not the Enterprise. You are not in command, captain.

PHILANA: Why even discuss it? Get rid of them.

PARMEN: No, my dear. That might offend the good doctor. You wish to stay? By all means. You can help us celebrate our anniversary. In the process, I hope we can persuade you to join our tiny republic.

MCCOY: You won't persuade me.

PARMEN: I think we will.

1
Why didn't search party get affected after McCoy altered past?
15
Is there anything more to the way others mistreat Spock?
3
Why didn't the mirror universe Major Kira and Doctor Bashir crossover at the same time?
5
How Are Starship Brigs Fortified?
21
In Star Trek what is space normal speed?
36
Where did the nickname of 'Bones' for McCoy come from?
7
Why couldn't McCoy catch a ride with Spock's dad back to Vulcan in Star Trek III?
13
Symbols in Star Trek: Planet of Judgment book
3
What is the correct process for Landru to absorb an Archon?