How did Luke get his lightsaber back after A New Hope?

After Vader kills Obi-Wan on the Death Star, his lightsaber falls at Vader's feet. Luke witnesses from a distance and escapes on the Falcon. The rest of the movie plays out, but that's the last we see of the blue lightsaber. The next time it appears, Luke is hacking himself free from the Wampa's clutches at the beginning of The Empire Strikes Back.

My question is...how did he get it back? Did Darth Vader overnight it to Luke through UPS?

I have scoured the internet and found no mention of it. There is common consensus that it is the same lightsaber, so... Any ideas?

Luke uses the same lightsaber throughout the first two films in the Original Trilogy, the same one that Obi-Wan took from Anakin at the end of their duel in Revenge of the Sith and that Luke was then given in Ben's shack on Tatooine.

Eventually he loses it, along with his hand in a duel with Vader at the end of The Empire Strikes Back and constructs a second lightsaber sometime between the end of the second film and the start of the third.

The following images are from the Star Wars: Visual Dictionary. The first is labelled "Skywalker's Lightsaber", the latter "Luke's Second Lightsaber" 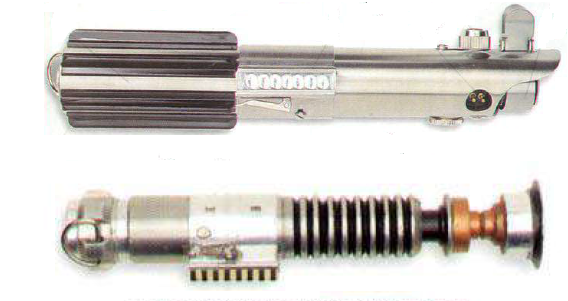 Obi-Wan wields the same lightsaber throughout A New Hope, one that he constructed between the end of Star Wars: Attack of the Clones and the start of the animated Star Wars: The Clone Wars TV show, evidently in honour of his becoming a Jedi Master. 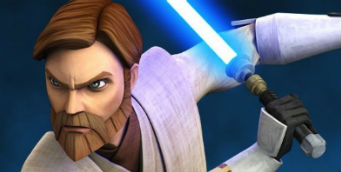 As an aside, you may wish to note that Obi-Wan's lightsaber evidently survived the duel with Darth Vader. While there is no further Disney-canon information about it, there's a rich seam of "Legends" stories that detail its fate, passing through several hands before finally ending up back in Luke's possession as part of his New Jedi Order.

Not the answer you're looking for? Browse other questions tagged star-wars lightsaber a-new-hope luke-skywalker the-empire-strikes-back or ask your own question.

22
What happened to Obi Wan's lightsaber after the duel between Obi-Wan and Darth Vader on the Death Star?

63
Did Luke accomplish anything by going to Cloud City?
30
After Hoth, why did Vader pursue the Millennium Falcon instead of Luke's X-Wing?
15
What does Yoda mean by “Remember your failure at the cave!”
7
What would have happened if Luke hadn't brought his weapon into the cave with him?
9
How does Luke learn to fight with a lightsaber?
50
Why is Vader suddenly a terrible fighter in Return of the Jedi?
16
Did Vader ever learn that Luke was actually trained by Yoda?
11
Prior to Cloud City, did Vader know that Han and Leia were "friends" of Luke?
35
Why didn't Vader execute Piett?
10
How did Luke get his lightsaber back from Raynar Thul?