Humans are spread throughout the galaxy, but Earth is unknown. I believe it is a John Brunner novel.

This is 'No Man's World' by Kenneth Bulmer (also published as 'Earth's Long Shadow'). From the inside cover, and can be seen on Goodreads.

When John Carter came to the Horakah Cluster, it was in the guise of an interstellar salesman. If anyone there suspected he was more than that, it would mean his instant execution.

But Carter's unusual personality made it possible for him to put over the deception and even gain a visa to the forbidden central planet, an arsenal of space war factories. Of course, had to make some special deals to do it, and those proved his undoing.

For he found himself caught between two menaces: the tyrannical militaristic moguls and a fantastically greater threat fro beyond the ends of space. 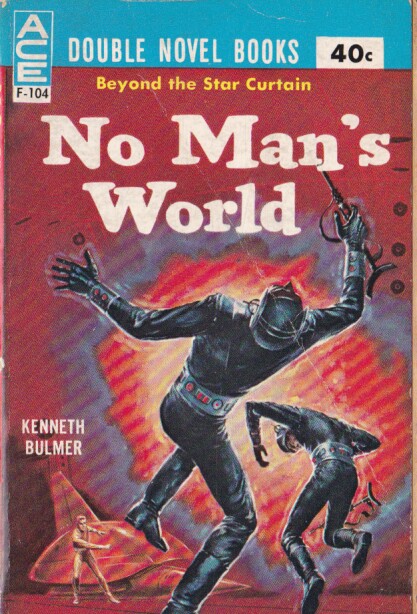 11
What is the novel with a John Carter like hero from the pulp era?
12
What novel has advanced alternate Earth humans trying to escape through portals from horrific inter-dimensional creatures?
5
ID novel (Ace pulp paperback?) - interplanetary passenger cruise, engine failure, lifeboats
5
SF Novel which is almost a John Carter of Mars Clone, man taught to swordfight gets taken to Mars on a teleportation experiment
4
Looking for a novel: young man takes shortcuts through another dimension
16
Can anyone figure out what book this answer refers to?
19
Spy from Earth studies Galactic Empire nobility and prevents plot to depose Emperor
10
Novel about a fighter who accompanies a couple through a portal to fight mantis-like aliens for recognition
5
Ace novel (?) - alternate universe hopping couple