I'm looking for a book I read a few years ago, because I was wanting to reread it. Only I can't remember the title or author. Cover had a lady with a sword? I honestly couldn't tell you how old it was when I read it, or honestly how long ago I read it. 5-6 years ago? It ended like it was 1 in a series, but I couldn't find any more by the author at the time, so I assumed it came out that year. Here is what I do remember:

Anybody got an idea of what I'm talking about?

I'm not 100% confident about this, but I'm going to take a shot and guess:

The Darkness of the Light by Peter David 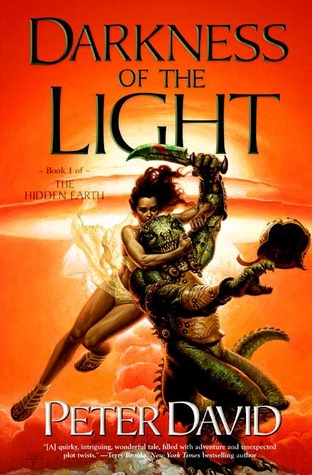 The Damned World is home to twelve races, each of which has fought the others for survival for generations. What none of them knows is that they are all creatures of Earth, a world of legend. On Earth eleven of the twelve races were creatures of human myth or folklore.

All live in awe of the all-powerful Overseer, whose authority none dare challenge. A new spirit has arisen among those sick of war and tired of living in fear. Some believe that it is possible for the races to become allies instead of adversaries. With this new spirit has come a time of possibility, of change.

Jepp, a human woman and Karsen, a Bottom Feeder, have broken with tradition and cast their lots together. They seek the Orb of Light, with which they believe they can gain the power and release the Damned World from its chains of violence and ignorance. But they’re not alone, for everyone who knows about the Orb would kill to get it. If someone gets the Orb, things will change. These are, as the proverb warns, interesting times.

An Amazon review indicates some of the races:

The First Wave of the Banished (from another dimension) showed up during the reign of the dinosaurs -- and engineered those reptiles' demise before turning on each other to similar extinction. The Second Wave occurred in the Bronze Age, and established a rich mythology for humans before they were eventually wiped out. The Third Wave was much, much larger, and the different Banished races -- cyclopean Oculars, vampiric Piri, reptilian Firedraques and Mandraques, subterranean Trulls, aquatic Merks and Markenes, and sundry other species -- were more than numerous and powerful enough to nearly wipe out humanity.

As you can see on the cover, there's a lizard person fighting a woman, and this review indicates that a scene much like you describe starts the book:

The story opens vividly with the closing moments of a bloody battle. David wastes no time in thrusting the reader into a dangerous world filled with monstrous creatures. Jepp, a female Mort (human), is saved by a non-human creature Karsen, who resembles a mythical faun, from a band of Mandraques (lizard-like men).

Other intertwining storyline involves the race of Cyclopes (or the Ocular as they are known in the book) and their enemies the subterranean, blood-suckers the Piri. The Ocular King Nagel is tired of having to deal with the Piri, a race he feels is truly animalistic and far inferior to his. The Queen of the Piri is a mystical figure with her race and provides an interesting contrast to Nagel.

I can't find any reference, but considering such a plot, a romance between a cyclops and a vampire would seem to be an obvious subplot.

It came out in 2007, which tracks with your timeline, was book 1 in an intended series (and reviews I read complained that it did not resolve everything so it would have been obvious as such), but only book 1 was out when you would have read it (book 2, The Height of the Depths is now out).

7
Sci-fi series with a war against pink blob-like bad guys who can mentally inflict pain
5
Man expelled from matriarchal squad, lives with one other woman, discovers an alien species
8
Older novel - Boy can operate alien machines, saves the planet
10
Book where a man unlikely to survive is stranded on an alien planet with water under the earth in plants
6
Book with blob-like non-humanoid alien that fuses with human
10
What is the name of this sci-fi novel with a male soldier and a lesbian lizard sidekick?
11
Book about impending revolution in US that was thwarted with fake alien craft crash