In the Clone Wars, General Grievous is shown being fired at with blasters quite often. Can he deflect blaster bolts?

If yes, then this brings up a few additional questions. He's shown spinning his hands when wielding lightsabers almost as often, which seem to create a kind of lightsaber shield. Is this fast enough to deflect blaster bolts or can he anticipate and deflect them with dedicated movements like a Jedi can?

Legends is ok, but canon answers are preferred.

His reflexes are good enough to take on a Jedi in hand to hand combat, so he could probably deflect a blaster bolt given ideal conditions and time to judge it's trajectory.

But he doesn't have Jedi Precognition, so he couldn't block bolts with the proficiency of an actual Jedi.

There are no canon instances of him deflecting blaster bolts, but he has been shown to do it in Legends. 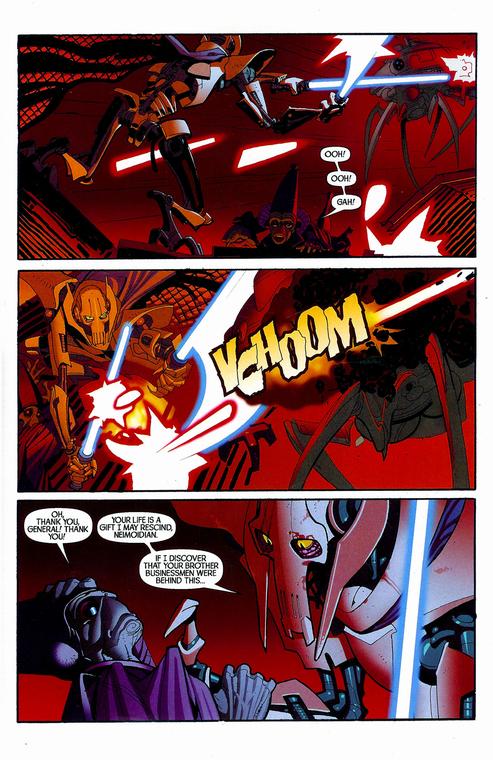 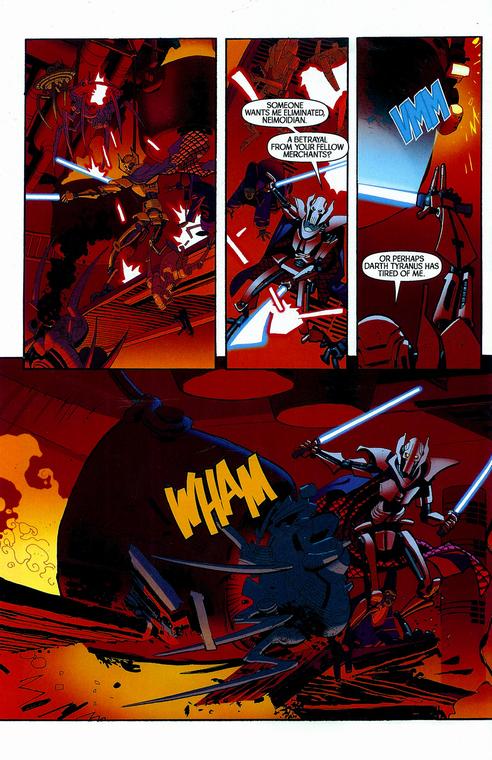 In the episode of clone wars where Grievous has captured R2 and Ashoka goes with Rex to retrieve him he is seen on his ship facing down Ashoka and the clones. In this scene he draws a single saber and deflects oncoming blaster fire.

As mentioned, Grievous is adept enough to engage in hand-to-hand with Jedi. He almost wins his fight with Obi-Wan in episode 3, so he's got to have some incredible reflexes, but since he is too mechanical to be able to use the Force, he doesn't have enough warning to actually deflect a blaster bolt. Mythbusters tested the reaction time of a normal person to a Hollywood muzzle flash of a sniper, concluding that it was only just barely possible to dodge a bullet fired from a significant distance with an obvious muzzle flash.

That means that even with superhuman reflexes, there is no way Grievous could deflect a blaster bolt without knowing beforehand when it would be fired (I'm ignoring the segment Mythbusters also did on dodging Star Wars blaster bolts).

However, this doesn't mean that Grievous cannot deflect blaster bolts. This just means that he cannot do it intentionally and singly. If I were Grievous, constantly surrounded by blaster-wielding possibly hostile folk that it was kind of my job to irritate, I would figure out some way to protect myself from them. My line of thought would be, "If I can't block each bolt individually after it is fired, why don't I just block all possible shots when I'm in battle?" and that would lead me to think, "Hmm, rotatable wrists, four arms... why not reserve two arms for blaster defense?" And that's basically what Grievous does. He spins his sabers at a speed that makes it almost impossible to shoot through the sabers and actually hit him, meaning that he doesn't have to worry about being shot at because he already has his shield up.

The best evidence for this duality is Grievous's final scene. Clearly, nobody has shot Grievous yet, though it seems painfully obvious that someone, somewhere along the line, would have tried. Thus, Grievous can deflect blaster bolts when he has the use of all of his arms. When Grievous engages Obi-Wan, the first thing he does is spin two sabers (possibly just for the effect). When Grievous actually connects with Obi-Wan, he stops spinning the sabers because there is no longer a threat of blaster fire. When the clones attack and bolts start flying again, Grievous seems unconcerned because he believes his droids will handle the threat, meaning that he doesn't need to shield himself. When Obi-Wan finally kills Grievous, it is with a blaster shot, at almost point-blank range. Grievous, armed with an energy stick, cannot block the shot, proving that his reflexes are not fast enough to react to a single shot.

I remember him deflecting some bolts in episode of CW when he and some of his troops crashed on some grass/farm planet and Obi-wan was chasing him (Rex was shot in that episode by commando droid sniper). He used line-gun to plug himself to the escape ship end when the troopers tried shoot him down he deflected some of their shots (very clumsy but still)