Is the Captain's Yacht from Enterprise-D (the Calypso) warp-capable?

I'm wondering if it is mentioned anywhere whether or not the Captain's Yacht from the Enterprise-D (the Calypso) is warp-capable?

I understand that it is described as a large, fancy shuttlecraft, and we see in the shows that even small shuttles are warp-capable, but I'd prefer to not guess here. We can probably "safely assume" that it is warp-capable, but I'm wondering specifically if anyone has a reference in any "canon" material from the shows (including for example Okudagrams) that speaks to this?

If there is nothing like that, then is there any "quasi-canon" or non-canon stuff that mentions it?

The Calypso does not appear to have been warp capable. The Calypso's specs are not laid out in any on screen / canon source, but the closest to canon source is a trading card authored by series contributors Rick Sternbach and Michael Okuda: 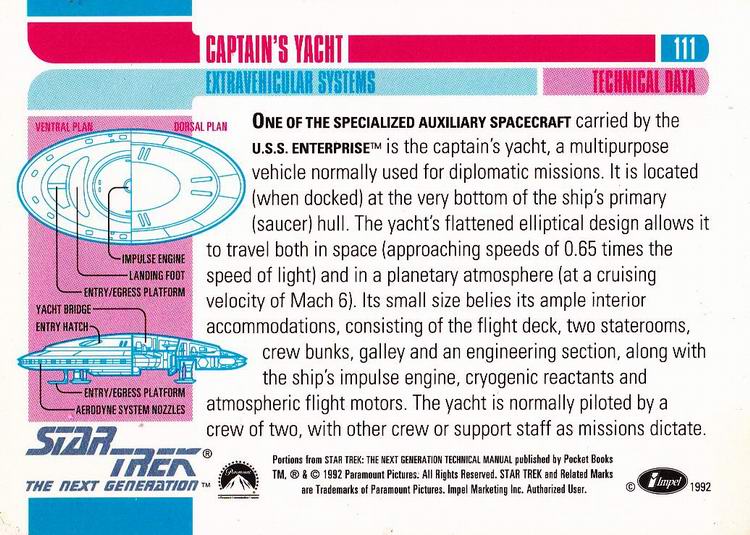 This card makes specific mention, in descriptive text and diagram, of the vessel's impulse engines; however, no mention of warp engines is made. Further, the ship's top speed (0.65 times the speed of light) does not require warp drive.

The Star Trek: The Next Generation Technical Manual (considered, if not entirely canon, at least a quasi-official authoritative source), gives the following description of the Captain's Yacht:

The yacht is capable of sustained sublight velocities approaching 0.65c. The impulse propulsion system (IPS) consists of six sequential beam-fusion reaction chambers feeding a central toroidal driver coil. Each chamber measures 1.3 m in diameter and is similar to its larger IPS cousins on the Enterprise. The reaction exhaust is vented through the driver coil and magnetohydrodynamic (MHD) accelerator for impulse travel. The MHD tap provides power to the navigational deflector grid for removal of interstellar dust and gas from the vehicle flight path. For atmosphere flight the exhaust is redirected after it exits the MHD tunnel and sent through the aerodyne engines around the ellipse equator. The normal atmosphere cruising velocity is Mach 6; maximum safe waverider velocity is Mach 20. Magnetic turbulence contour equalizers, variants of the navigational deflector, provide momentum conditioning at Mach transitions.

The Enterprise is designed to operate safely without the yacht in place, since its structural integrity field and inertial damping fields produce slightly modified fields in those areas to compensate for the concavity of the yacht docking structure. Yacht operational rules in the vicinity of the starship are generally the same as those for other auxiliary spacecraft, with the difference being that the yacht, during emergency undockings, may be safely deployed at velocities as high as Warp Factor 7. The yacht's systems are designed to afford the craft a smooth falloff of warp field, though the decaying field energy cannot be sustained for any appreciable time.

It explicitly states that the Yacht is equipped with an Impulse Engine, but doesn't provide any information about a Warp Propulsion System, seemingly implying that it has none; also, the statement that it can be detached from the starship traveling at Warp speed and perform a "smooth falloff of warp field" seem to further imply that it can't sustain warp speeds on its own.

On the schematic that is present on the Manual, some systems are detailed (including the Impulse engine), but also here there is no mention of a Warp engine: 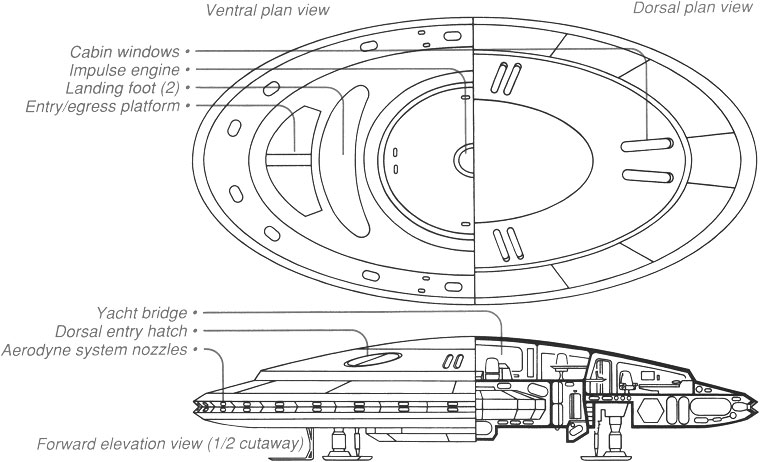 Short answer: Yes, it was warp capable but at low speeds only.

At 10m long, 18m wide and 8m high with two decks, the yacht had a mass of 95 metric tonnes and was unarmed. The interior featured a flight deck, two small staterooms, bunks for the flight crew a galley and access to the engine compartment. It could accomodate two flight crew and one service representative plus VIP passengers.

More importantly on that same page, are the specifications:

[Edit] Thanks to @HorusKol for some more information

It seems that the quoted figure from Memory Beta may not be entirely correct. In this question, it quotes the speed as 0.65 times the speed of light, not warp 0.65.

15
What is the purpose of the Captain's Yacht on some Federation starship classes?
22
Has Starfleet ever made First Contact with a pre-established space-faring species oblivious to alien intelligence?
12
Did we ever see the captain's yacht?
5
Could a shuttlecraft warp engine be used on a starship?
1
Did they have replicators on Kirk's Enterprise?
18
How come there are no middle-aged senior officers on the Enterprise D other than Picard?
6
Is there an in-universe explanation why Picard uses shuttlecrafts instead of the Captain's Yacht?
6
Does Control's existence contradict the set canon with regards to AI?
12
Has there ever been a warp / non-warp collision?