How Does A Sarlacc Eat?

Ok so I was looking through questions and came across one about how to escape from a Sarlacc. In it the questioner says that it takes 1000 years for them to digest their food, which I knew, but he then went on to say that the victim is alive throughout that time and suffers through it, I knew that too. But the way he stated it he made it sound like the victim is alive throughout the entire 1000 years and dies at the end.

Do Sarlaccs have some sort of chemical in their saliva that extends the life of their victims?

There is some information on what happens to those unlucky enough to be eaten by a Sarlacc. This is what http://starwars.wikia.com/wiki/Sarlacc has to say:

Sarlaccs would begin their lives as spores and were able to travel great distances. When a male and female encountered one another, the smaller male would parasitically feed off the female, diminishing her size while increasing his own. Once the male reached the female's original size, he would burst, releasing millions of spores into the air and atmosphere.[8]

Once sarlaccs reached their maturity after 30,000 years, they would burrow themselves nearly 100 meters below the surface, feeding on creatures unfortunate enough to fall into their mouths. Victims of the sarlacc would be injected with immobilizing neurotoxins that caused constant pain, and, while still conscious, would be digested for millennia.[8]

At http://starwars.wikia.com/wiki/Sarlacc/Legends there is more information:

The vessels also provided victims with nutrients to keep them alive while they were digested in agony; sometimes when a victim was in the stomach for a long time period, the sarlacc actually embedded it in the lining of the stomach to make room for other victims it swallowed and to make the stomach stronger so that other victims could not escape participially once their digestion was complete and were free to become One with the Force.

A number of smaller, secondary stomachs were used to store victims for later consumption at times when the sarlacc needed larger amounts of nutrients, such as when it needed to grow, breed, or strengthen its tentacles and beak for catching stronger, larger prey. The secondary stomachs also functioned as a space to store victims when the main stomach ran out of room, although this was rare as the sarlaccs were an exceptionally feared creature in the Galaxy. The acidic fluids in the stomachs were composed of weak chemicals that took much longer to digest prey than acids in the stomach of other creatures. They specifically targeted skin and muscle tissue, because that was where the nutrients in the victims were. The secondary stomachs were also lined with more vessels and were smaller and more cramped to enclose the victims in, so that the sarlacc did not have to deal with the victim trying to escape its hold. The pain endured by its victims in this process was reputed to be unimaginable, with only rare individuals such as Boba Fett being able to resist.

In addition to the acidic fluids that digested the outer portions of the victims, the sarlacc also processed its victims from within. The sarlacc's blood was highly caustic, and was employed in the digestion of prey. The tendrils and vessels pumped the sarlacc's acidic blood into its victims to digest the inside of their bodies, and to carry back nutrients from the victims. This process also provided the victims with minimal sustenance.

It would appear that the combination of the neurotoxins and the nutrients provided kept the victims alive over the immense digestive period. 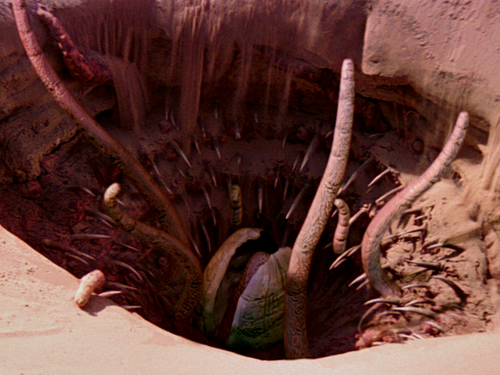 Suprisingly, this isn't a retcon or an attempt to explain Threepio's throaway line ("In his belly, you will find a new definition of pain and suffering, as you are slowly digested over a thousand years.")

In the film's official novelisation, released at the same time as the film and hence considered 'G-Canon', we get this piece of exposition:

Lando closed his eyes and tried to think of all the ways he might give the Sarlacc a thousand years of indigestion. He bet himself three to two he could outlast anybody else in the creature’s stomach. Maybe if he talked that last guard out of his uniform …

So he clearly feels that survival is a matter of more than mere minutes.

Later sources have elaborated on this extensively, creating an entire ecosystem to explain that the Sarlacc releases nutrients to keep the victim alive.

After being swallowed by the tongue, the victim made its way into the sarlacc's stomach to be digested, purportedly being kept alive and slowly digested for a millennium. A strong network of vessels inside the stomach punctured the victim's skin and muscles and then embedded itself into victims before injecting neurotoxins into them, preventing the victims from escaping and ensuring that they remained immersed in the acidic fluids in the stomach, and attached to the walls of the stomach.

The vessels also provided victims with nutrients to keep them alive while they were digested in agony; sometimes when a victim was in the stomach for a long time period, the sarlacc actually embedded it in the lining of the stomach to make room for other victims it swallowed and to make the stomach stronger so that other victims could not escape participially once their digestion was complete

The way in which it keeps its victims alive beyond their allotted lifespan isn't covered in any great detail but we do learn that there's a telepathic component to its torture and that it enjoys the pain of its victims, explaining why it would want to keep them alive rather than merely consuming their nutrients.

15
How does a sarlacc gain any energy if it keeps victims alive for a thousand years?

3
How "real" are the experiences in the Dark Side Cave?
30
How often do ewoks eat sentients?
4
Is the Sarlacc monster dead?
15
How does a sarlacc gain any energy if it keeps victims alive for a thousand years?
25
What does Yoda's species eat?
0
How does the medical frigate land?
8
Who survived the skirmish at the Sarlacc pit and the destruction of the Khetanna?
12
How many different times total has Boba Fett escaped the Sarlacc in any official story?