I read this book about 15 years ago. The main character is trying to collect elemental shards in order to defeat the evil empire. Pretty sure the cover was mostly brown and red tones with natural spindly rock towers and a few heroes.

I remember a fair bit of the plot. Main points:

The mc starts off as a soldier for the evil empire, but then changes his ways. He is the son? of a famous general who calls him by a nickname - Vonny. He's the only person to use the nickname, which is relevant bc the empire has these big magi-tech metal sentinels which are powered by the essence or personality of real people. At the end of the book the mc encounters one of the sentinels as part of a raid on the transport train and it calls him Vonny, which is a big revelation. Wish I could remember the main character's actual name!

Most of the book is an adventure across different parts of the world. The mc has a team of people around him. At least one is a lady. One is a Bedouin style desert man who betrays them - he pretends to be an Everyman but turns against the group when they enter his brothers domain in a desert area. Suspicion was raised bc he claimed to be a worker but had no callus on hands.

At some point the group is in an elevator of sorts which is just a metal cage lowered by chain over a precipitous drop. They end up in some kind of fight during the trip down, possibly with flying enemies.

They eventually find the earth shard (I believe this is the first book in a series where the other shards are collected later in the series). The mc has the shard but doesn't know how to use it. After a while he ends up absorbing a bunch of power from the ground and has to discharge it into a stone column to stop it from overwhelming him.

I feel like there were races other than humans, possibly lizard people, winged people, but not sure.

There are trains and other technology, but they are hard to come by. Maybe only the evil empire has access?

This is definitely NOT the Death Gate cycle, which is a great series.

So I finally remembered the name of one of the races in the book, and was able to google it. I was trying to remember a series set in Thunderscape: The World of Aden. The one I actually read was The Sentinel. I just downloaded the kindle book. What a cheesy cover! Love it. 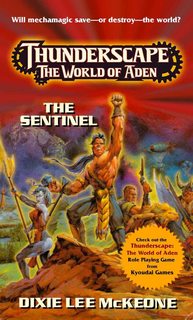 8
90's (or earlier) YA fantasy series with broken crystal said scattered across time, imbued with telepathic powers
12
Fantasy novel, magic sword and different worlds
6
Looking for fantasy book with a magic tree that picks one person to talk to while it is dying and letting evil back into the world
9
Fantasy book series about persecuted people with elemental magic powers
4
Fantasy story with a war and magic usable via stones; main character was trapped in a collapsed mine
11
Fantasy series with Celtic overtones, intermittent stone magic, and ongoing slow magic
21
Fantasy novel/series with young man who discovers he can use magic that is outlawed
16
Miniseries in post-rapture US with good/evil conflict