Where do babies come from (on the Axiom)?

Seeing this excerpt from Wall•E

in Richard's answer to another Wall•E question I wondered how the kids came into being.

Surely they must have been conceived on the Axiom as humans have been confined to it for several generations by now.

However, considering that people don't seem to interact physically with each other and that their physique seems to prevent them from moving themselves, it looks like they would not be able to reproduce in the "natural way".

For me, this raises the question of how children are concieved on the Axiom. As this is a movie for kids I doubt that there will be explicit explanations but maybe there are some hints?

We don't know, but looking at it objectively leads to some deeply unpleasant conclusions

An extensive review of the film and its additional materials reveals no obvious way that humanity has been able to survive. The demographics are just weird (loads of adults of breeding age but almost no children?) which is great from a story-telling perspective, but almost impossible to justify from a worldbuilding POV.

We could solve these problems by simply having thousands of passengers and hundreds of children elsewhere on the ship (e.g. that we simply didn't happen to see) but we know from the script that this isn't the case when the entire passenger complement is summoned to the lido deck in the final sequence.

Conclusions (look away now, not for the squeamish)

We know that the passengers enjoy virtual dating and it's not hard to imagine that a good virtual date would end with virtual sex, affording the ship the opportunity to impregnate the woman with a viable sample of the man's sperm.

MARY: Date?! (derisive snort) Don't get me started! Every holo-date I've been on has been a virtual disaster! If I could just meet one who wasn't so superficial. There are no good men out there!...

Alternatively, the women on the ship are simply impregnated at an appropriate moment (again, by robots) in waves, thus allowing the ship to repopulate itself periodically.

The reason that the passenger complement looks so odd is that we're looking at a quiet period where Auto is only breeding small numbers of humans, presumably to rebalance the number of male and female births from the last big fertility "wave" and replace any children that they've had to euthanise due to birth defects. Obviously anyone over breeding age is also worthless to the ship, and again it's likely that they've either been dumped overboard or mulched up into soylent-green-in-a-cup.

In my rigorous search of one exact hour, I can find no in-universe explanations for you. But then you didn't exactly expect any. There is plenty of fan speculation, but that's all it is, speculation.

I'll keep searching, fitfully, but I don't expect to find anything. In the meantime, there seem to be these choices:

I favor the stork. It has a cartoon pedigree, albeit on the Warner Brothers side of things. 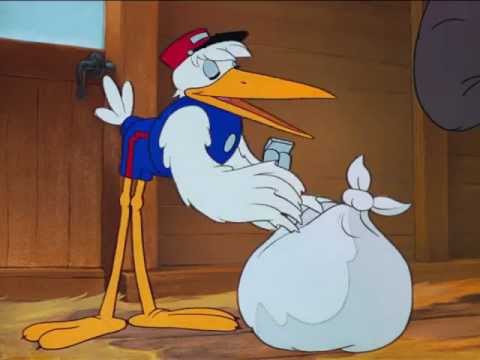 49
Were people in Wall•E illiterate?
39
How can the people in the Axiom survive for 700 years?

53
Why was Wall•E the only remaining Wall•E unit?
13
In WALL•E, why does everyone get thrown when the Axiom suddenly lists?
15
Was Earth the only planet used as a garbage dump by the Buy & Large corporation?
13
In WALL•E, what kind of economy was used on the Axiom?
5
Was the hyperdrive in WALL-E faster than the norm?
39
How can the people in the Axiom survive for 700 years?
10
Why was the Axiom located so far away from Earth?
1
Why did the hover-chairs deploy oxygen masks when the captain activated the Holo-Detector and the passengers went to the Lido Deck?
90
Why didn’t EVE recognize the little cockroach as a living organism?