What is the earliest worldbuilding fiction?

How old is the worldbuilding phenomenon in writing? What is the earliest writing that can be categorized as such?

The worldbuilding wikipedia page says that the term first appeared in 1965; however, in retrospect there are earlier stories that most would now happily classify as falling into that category - such as those by JRR Tolkien and CS Lewis.

I now see many sci-fi and fantasy stories scrutinized under that lens, although I believe that some of their authors never had worldbuilding as their priority. So it could be that the phenomenon has more to do with the reader's perception of why sci-fi / fantasy authors write, rather than something inherent to the authors or the fiction itself.

That said, I am wondering what the earliest example of this might be. In my definition, in order to qualify the story must be fictional, large (either one large story or a series of many short ones), greatly prioritize in-universe consistency, and come with the understanding that it is not describing our own reality the way religious texts might.

I considered asking the worldbuilding stack exchange, but my guess is that here may be a better database for existing literature, rather than for writing technique.

My suggestion would be Utopia by Sir Thomas More, written in 1516. In it, More gives a very detailed description of a fictional society, religion, and political system on the equally fictional American island of Utopia.

Early editions even came with a map, reminiscent of the ones you'll see in the preface to Narnia and Lord of the Rings books. 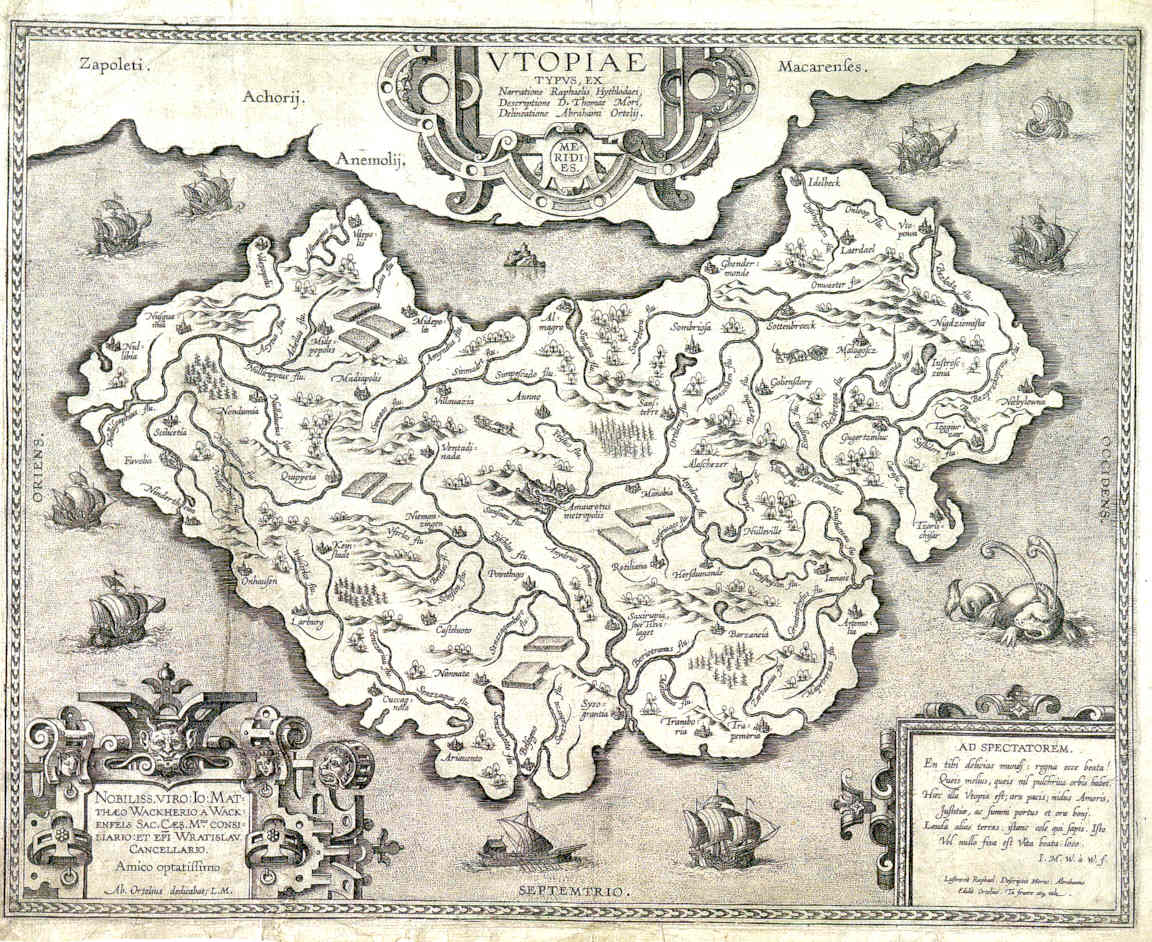 There are of course much, much earlier instances of people creating fictional societies and fictional islands (see: Plato's ideal republic and Homer's Ogygia), but I think this really comes much closer to the nitty gritty of what people think of as "worldbuilding."

I don't know if you would consider philosophical speculation as world building, but certainly The Republic of Plato is an example of a constructed fictional society with a lot of thought put into it. One could argue that the description of Atlantis in Timeo and Critias is a fictional world construction, making Plato a proto-scifi/fantasy writer, though some people chose to take it as something Plato actually believed.

I think we need to say that worldbuilding has been a characteristic of science fiction from the outset.

Let's pull out that old history-of chestnut -- Lucian of Samosata's True History, also translated as A True Story, from about 120 CE, said to be the world's first science fiction story.

In the interval, while I was living on the Moon, I observed some strange and wonderful things that I wish to speak of.

The point is, the (unreliable) narrator takes time out from his adventures to describe the layouts and customs of the places he and his companions visit.

In the course of True History, the narrator and his companions get involved in a war between the armies of the Sun and the Moon, aiding the side they meet first are captured by the other side, and then are ransomed by the leader of the army they aided.

They travel around visiting the various civilizations in the heavens. The narrator takes time out to describe them:

Sailing the next night and day we reached Lamp-town toward evening, already being on our downward way. This city lies in the air midway between the Pleiades and the Hyades, though much lower than the Zodiac. On landing, we did not find any men at all, but a lot of lamps running about and loitering in the public square and at the harbour. Some of them were small and poor, so to speak: a few, being great and powerful, were very splendid and conspicuous.

Lucian is writing tongue-in-cheek and gives not-so-subtle hints that the story is not to taken as literal truth, but we shiuld consider this the closest thing to "willing suspension of disbelief" that existed at the time.

A case can also be made for Plato's dialogue Critias, from about 360 BC. In Critias, Plato recounts the story of Atlantis, and gives an entire fictional geography (including natural resources) and history of the place.

The story of Atlantis is a moral allegory, and there is no evidence that the place was anything more than an invention of Plato's (or maybe Socrates') imagination, despite attempts by some charlatans starting in the 19th Century to claim it was a real place.

Edit as recommended (but may be valuable to someone else):

Well, while not definitive, worldbuilding was created as far back as Ancient Egypt if not further. The goddess Nun (Nunet?) was associated with the chaos that existed at the edges of the universe as a myth. And there were others, inhabiting places called 'heaven,' in Egypt as early as 3000 BCE, which can certainly be considered worldbuilding (creating fictional places with attributes).

This and other fabled lands continued for thousands of years well past the familiar variety 'Heavens' and 'Hells,' sometimes with vastly detailed descriptions.

I suspect you want another world that is more contemporary, so I would suggest the poem, "Kubla Khan" by Samuel Taylor Coleridge, in which he talks about a vision primarily of a mystical place called Xanadu, the "pleasure dome" of the ruthless warrior, Kubla Khan, written in 1797. It has been referenced in literature even as far along as the late 80s by science fiction writers.

Not the answer you're looking for? Browse other questions tagged history-of worldbuilding or ask your own question.