When was the first driverless car story written?

Reading the question about a future (the future) when non-automatic cars will be illegal, a moment sometimes called the automotive singularity, sparked the question in my mind about when the first story with driverless cars was written. There must have been dozens of stories with the driverless concept over the years.

I know Arthur C. Clarke tackled this in Imperial Earth, from 1976.

As the beautiful old car cruised in almost perfect silence under the guidance of it's automatic controls, Duncan tried to see something of the terrain through which she was passing. The spaceport was 50 km from the city - no one had yet invented a noiseless rocket - and the four-lane highway bore a surprising amount of traffic. Duncan could count at least 20 vehicles of different types and even though they were all moving in the same direction, the spectacle was somewhat alarming. "I hope all those other cars are on automatic," he said anxiously.

Washington looked a little shocked. "Of course," he said. "It's been a criminal offense for at least a hundred years to drive manually on a public highway. But we still have occasional psychopaths to kill themselves and other people..."

The big car was slowing down, it's computer brain sensing an exit ahead. Presently it peeled off from the parkway, then speeded up again along a narrow road whose surface rapidly disintegrated into a barely visible grass-covered track. Washington took the steering lever just a second before the END AUTO warning started to flash on the control panel.

But that's a late entry.

Isaac Asimov was earlier with his story Sally, in 1953. That's early, but I didn't think it was early enough.

I heard Sally coming up behind me and I put out my hand. She slid right into it and the feel of the hard, glossy enamel of her fender was warm in my palm.

That's one way of putting it. Sally was a 2045 convertible with a Hennis-Carleton positronic motor and an Armat chassis. She had the cleanest, finest lines I've ever seen on any model, bar none. For five years, she'd been my favorite, and I'd put everything into her I could dream up. In all that time, there'd never been a human being behind her wheel.

I did some more searching and I found what would seem to be a very early story, The Living Machine, by David H. Keller, from 1935.

"I want to show you something new in the way of an automobile." "Nothing new about this," laughed Babson, scornfully. "One of our best and most familiar models."

"How about the steering wheel?"

"I do not need one. Sit down and make yourself comfortable. Now watch me. We are going into traffic..."

That's relatively early into America's car culture, at least from today's perspective, and it might be the first. I haven't found anything earlier yet. But I wouldn't be surprised if it wasn't the first.

But was it? Does anyone know of an earlier story?

Based on my own research, I concur that the 1935 David H. Keller story "The Living Machine" is the earliest fictional appearance of an autonomous car — unless you are willing to blur the lines between fact and fiction and count this unrealized design for an automated, pre-programmed clockwork cart by Leonardo da Vinci from 1478: 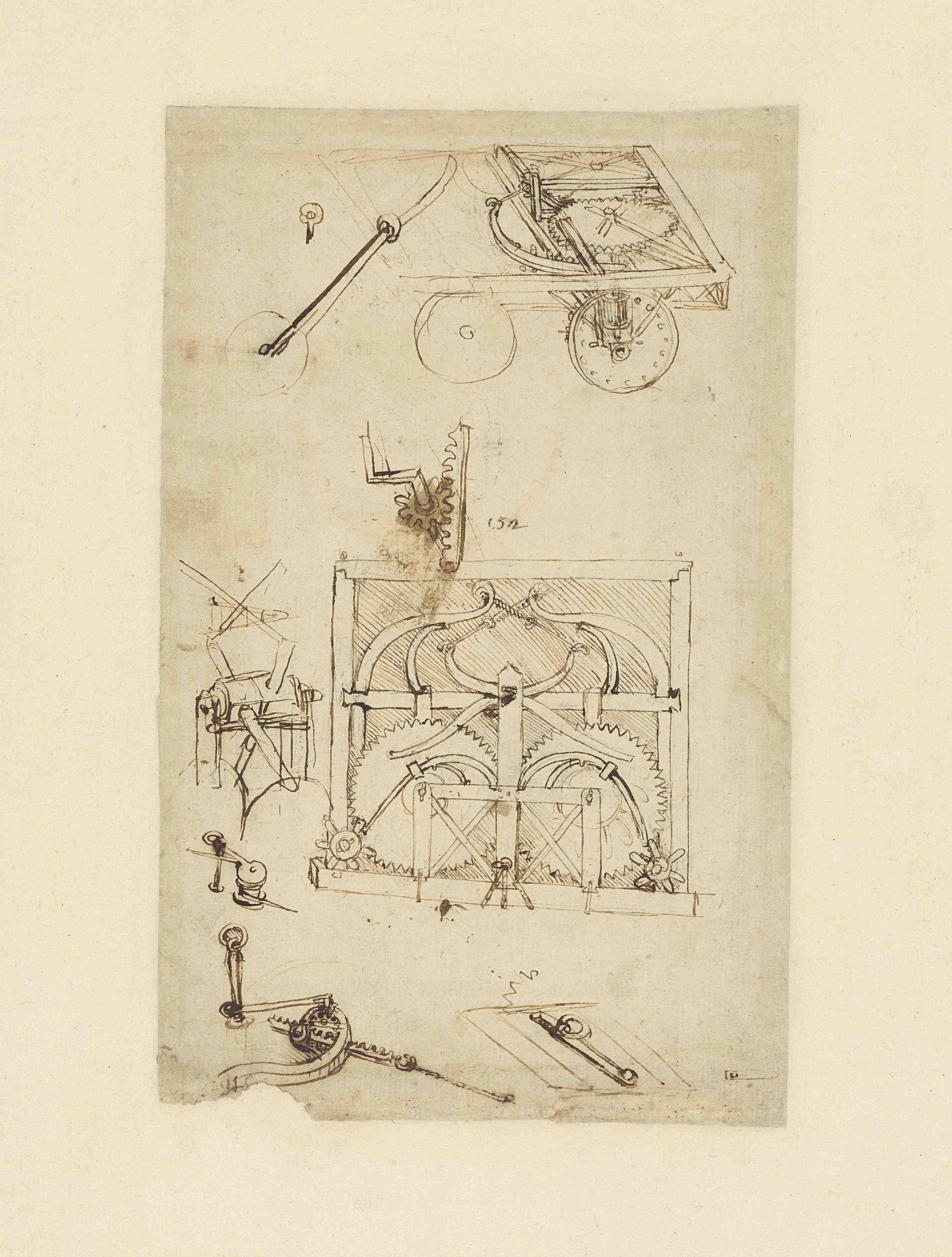 The 1930 novel Paradise and Iron by Miles J. Breuer, M.D. was originally published in Amazing Stories Quarterly, Summer 1930, available at the Internet Archive. The narrator has been taken by an automated ship to a mysterious island where everything is automated. He goes for a ride in an automatic car:

"I'll get out Sappho for you first," Miss Kaspar cried to her grandfather; and the affectionate glow that lighted up her sunny face, as she glanced at him, caused a pang within me for being left out of things. I had to remind myself that last night's rescue did not necessarily give me any special rights nor privileges; and that I ought to be thankful for the kindness that had been bestowed on me last night. She hurried out of the back door; and "Sappho" turned out to be a greenish-black roadster, with wheels four feet high, an extraordinarily large radiator appropriate to hot climates, headlights set in the top of the hood—and no steering wheel! The machine fascinated me so that I stood about it curiously instead of mixing with the group of young people.

In fact, I was a little nettled at the people. They seemed to take no particular nor unusual interest in me. Upon introduction they were very gracious; but they immediately took me for granted as one of them. No one asked me where I came from, nor what my country was like, nor how I liked it here. Like a group of frolicking children, they seemed intent on the interests of the moment, and accepted everything as it came. So, I decided to ride with Kaspar in his Sappho.

I waited some minuted for Kaspar to appear. Then I walked all around the curious vehicle, and I finally decided to get into the car and wait there for Kaspar. So I climbed in and sat down, with a queer feeling at the complete absence of the steering wheel and gear-shift levers. However, on the dashboard were a great many dials; and something was ticking quietly somewhere inside the machine.

Then there was a "clickety-click" and a whirr of the motor, and the car moved gently away from the curb. It swerved out into the street, gathered speed, and then turned to the right around a corner. It slowed down for two women crossing the street, and avoided a truck coming toward us. It gave me an eerie feeling to sit in the thing and have it carry me around automatically.

Then it suddenly dawned on me, that here I was alone in the thing, on an unknown street, in an unknown city, racing along at too high a speed to jump out, and rapidly getting farther away from places with which I was familiar. How could the machine be controlled? Already I was completely lost in the city. How and why had the thing started? I had been exceptionally careful not to touch anything, and was sure that no act of mine had set it off. But I was rather proud that I did not lose my head; I leaned back to think. This was not my first emergency.

The car was carrying me rapidly through a beautiful residence section of the city. I could not help looking about me. It was a veritable Garden of Eden, and all the more beautiful for the added touch of human art. The lawns were smooth and soft, with half-disclosed statuary among the shrubbery, or fountains at the end of vistas. Homes spread over the ground or soared into the air like realized dreams, without regard to expense or material limitations. But, every few minutes my mind came back with a jerk to my own anomalous position.

I examined the dials on the instrument-board closely. There were ten of them, and they had knobs like the dials on a safe-door, or like the tuning dials on a radio receiving set. Some of them had letters around the periphery and others had figure. I looked for something that said "stop" or "start", but there was nothing of the sort, nor even any words of any kind. There were a number of meters, but a speedometer was the only one whose use I recognized. The whole proposition looked about as impossible to me as a Chinese puzzle.

The more I thought about it, the more I thought that my only hope was to try manipulating the dials. That was the only way to learn something about managing the car. I did so: I twirled a knob at random and waited expectantly. Nothing happened. At least, not immediately. After a few moments, however, the car stopped, turned around, and started off in the opposite direction. I should have gotten out of it while it stood still for an instant; but for the moment my curiosity was whetted, and I wanted to try the dials again to see what would happen. Anyway, before I recollected myself, the car was speeding in the opposite direction at too rapid a rate to permit my getting off.

If I had hoped to get back to Kaspar's this way, I was disappointed at the first corner, where the car turned to the right, drove around a block and was soon spinning along in its original direction.

"You're a stubborn jade, Sappho," I grumbled aloud. "We'll have to see what we can do with you."

I now perceived where I had made my mistake: I had not noted which dial I had turned nor how I had turned it, when I had reversed the car, and I was unable to repeat the movement. So, the next time, I carefully turned the first dial to the letter "A". There was no effect at all. I moved the second dial to "A". A curious fluty whistling followed; it proceeded from the hood, and varied up and down several octaves of the musical scale, with a remote resemblance to rhythm and melody. Before it died down, I sank back and gave up. A little reflection showed me that with ten dials and twenty-five letters or figures to a dial, there were several million combinations. It was hopeless.

At least a honorable mention should go to Erich Kästners "The 35th of May", which had self-driving cars in 1931 (also mobile phones). The pre-teen protagonist encounters them in the futuristic city of "Elektropolis" (a Swiftian take on the futuristic fantasies in Kästners time) and is mightily annoyed since he had planned to become a chauffeur once he grows up.

I'm not 100% sure if this should count, though - there is a sciency mechanism given for the workings of the driverless car ("sinnreiche Kopplung eines elektromagentischen Feldes mit einer Radiozentrale", i.e. "an ingenious combination of an electromagnetic field and a central control facility"), but all in all this is satirical phantasy (complete with magic wardrobes, a rollerskating horse and a fully automized land of plenty) rather than the kind of serious SF you seem to be looking for. But it does predate "The Living Machine" (and the fact that Kästner was able to make jokes about this in a children's novel suggests that this was not a completely new idea).

Come to think of it, it might be that by self-driving you mean "autonomous" rather than "remote controlled" (I've taken "driverless" to mean that nobody sits in the drivers seat of the car).

Not the answer you're looking for? Browse other questions tagged history-of technology science-fiction-genre hard-sci-fi or ask your own question.