Are the Rohirrim masters of horse because Tolkien believed cavalry would have changed the outcome of Viking invasions of England?

I found this picture on Imgur: 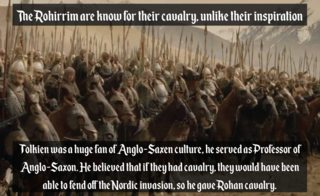 The Rohirrim are know [sic] for their cavalry, unlike their inspiration. Tolkien was a huge fan of Anglo-Saxen [sic] culture, he served as Professor of Anglo-Saxon. He believed that if they had cavalry, they would have been able to fend off the Nordic invasion, so he gave Rohan cavalry.

I am skeptical of this claim. As far as I know, Tolkien never used any such specific influence from Anglo-Saxon history or culture when designing the Rohirrim. He rendered the Rohirric language as Old English just to show that it was a more archaic form of Westron, represented by modern English. I don't have the books to hand, but I also remember the appendices saying the Rohirrim were only Anglo-Saxon in the general sense of being a less developed civilization living under the influence of a greater, more ancient, more advanced civilization (that being Gondor for the Rohirrim, and presumably Rome for the Anglo-Saxons). But the books themselves and the appendices don't suggest the Rohirrim were meant to be direct analogues to the Anglo-Saxons.

This doesn't sound like something Tolkien would do, or admit to doing if he had done. Is this claim actually true? Did Tolkien make the Rohirrim masters of cavalry because of some kind of "what-if" situation about the Norse invasions of England? If so, where is it documented?

The cavalry of the Rohirrim look like a reimagining of the old Kingdom of Mercia, which was central and western England before Alfred the Great. (I got this idea from one of Tom Shippey's books, either Author of the Century or Road to Middle Earth ... or both. Been a few years since I read them). The old English language that Tolkien used as the model for the language of Rohan is related to the old English from that region.

The symbol of the white horse on a green field (on the banner of the Rohirrim) is, per Shippey, founded on a real world place in Uffington, which is on the southwestern marches of Mercia (current Oxfordshire) where it runs into Wessex (which was for a while included in Mercia). In Shippey's The Road to Middle-earth his analysis is that the emblem of the King's banner was inspired by the Uffington White Horse.

In LoTR, Tolkien did a great job of providing a world with depth. In Middle Earth, you ran across things of great antiquity ... and there are stories behind them. (Example? The two statues at Argonath; the seat at Amon Hen). In Tolkien's reality (England) there were things of great antiquity (Stonehenge, that White Horse, various standing stones, druidic/faerie rings of trees) all of which had stories behind them -- some real and some imagined.

From a story teller's perspective, a banner with a white horse would be the symbol of horse people. Not much of a stretch to render the whole kingdom as the home of great horsemen.

There is speculation that Tolkien gave the Rohirrim cavalry as a way of fashioning an imaginary Anglo-Saxon riding culture that could have resisted the Norman Invasion. But I'm not aware if there are any writings of Tolkien that would specifically support this.

Wikipedia has this to say:

The names and many details of their culture are in fact based on Germanic-derived cultures, particularly that of the Anglo-Saxons and their Old English language, towards which Tolkien felt a strong affinity. Ultimately Anglo-Saxon England was defeated by the cavalry of the Normans at the Battle of Hastings, and some Tolkien scholars have speculated that the Rohirrim are Tolkien's wishful version of an Anglo-Saxon society that retained a "rider culture", and would have been able to resist such an invasion.

Although the Duke of Normandy was a descendant of Vikings, I'm not sure if the Norman Invasion would be typified as part of the Nordic Invasion. Actually, if I follow the history correctly, the Battle of Hastings was something of a family affair with Viking ancestry on both sides.

The BBC has perhaps too much to say on the subject. I was going to paste it in, but it goes on far too long and far too much off topic. But you can read it here:

I'm neither a Tolkien scholar, nor a historian and I'm sure there are others here who will have more specific information to offer.

It was about myth. Anglo-Saxon myth was horse oriented. Their legendary leaders during the Saxon invasion of Britain were Hengist and Horsa, twins whose names are both words for stallion. Tolkien designed the Rohirrim based on an idealized version of these myths and the culture of ancient England. Anglo-saxons were sea people (interestingly there's always been a connection in Indo-European myth between the sea god and horses, compare greek Poseidon and the strong connection between rivers and "river horses".) Tolkien simply used the idea of Saxons from a land locked area as inspiration for the Rohirrim. There are clearly many aspects of Rohirric society that are derived from Anglo Saxons (burial practices, nobility, combat) but it's impossible to say how much, as Tolkien himself pointed out that the Rohirrim were NOT anglo-saxons in all ways. Two things we know about Tolkien: he was the chair of Anglo-Saxon studies, and he wanted to create an entirely English mythology based on real myths and legends. No surprise this material turns up in his novels.

Anglo Saxons had cavalry. The Norman French had THE cavalry. The last king of the house of Wessex had died childless and he was succeeded by Harold Godwinsson amid much controversy. Everyone wanted Britain, and because of the Heathen invasions of the Viking age, there were legitimate claims to the throne from Scandinavia and Norman France. So Harald Hardrada of Norway invaded and was defeated by a hastily assembled English army. Unfortunately for Harold, William the Conqueror invaded immediately afterward with a well planned and organized campaign and defeated Harold's army at the battle of Hastings in 1066.

The English had successfully and repeatedly repulsed almost 300 years of Norse invasion. They did this using strategically placed fortresses called "burhs". Since most of the Norse raids were for plunder and slaves, the English would enclose entire cities worth of people and stuff in these burhs. The Norse, too far from home for reinforcements, were unwilling to lay long expensive sieges. Harold attacked William to try and contain him in the beachhead. He meant to raise armies and bring them south and probably would have used the same burh based strategy while trying to cut off the supply and reinforcement lines to the Norman army. Defending an island is a huge advantage. The invading army must supply itself from the surrounding land and either transport siege machines or build them on a foreign shore.

So it might have been a popular romantic thought (and romantic though was varied and bizarre at the time) that cavalry could have changed the outcome, but it seems unlikely from what we know. Harold lost because he'd just fought a huge pitched battle and never recovered.

While William was a descendant of Rollo, the first Duke of Normandy, a viking who was given extensive lands in exchange for basically not destroying Paris, the invading were French. They spoke French and were integrated into French (i.e. Frankish) society. Harald Hardrada was a viking from Norway. Harold Godwinsson was Anglo-Saxon.

The Uffington horse is modern. Tolkien did say that Theoden's banner was inspired by the White Horse, but that's really the only connection there. It's no stretch to think that such a culture would use horses on their banners.

10
Has Christopher Tolkien said how he would have done "On the Ruin of Doriath" differently?