Are Jedi bound by a code of honor or morals?

In The Phantom Menace alone, Qui-Gon (and in part Obi-Wan) are quick to use Jedi mind tricks and not only gamble but also cheat at it. They seem happy with this fact.

Do Jedi have morals and ethics, or a code of honor?

As far as Qui-Gon, they were doing what their mission was requiring. They are Jedi, not Boy Scouts (nor Samurai for that matter, never mind extensive Kurosawa-stealing :)

Remember, Jedi are basically more-or-less hereditary aristocrats. They don't mind lying/cheating/stealing for the Greater Good - they are just extra meticulous about being honest when it's greater good or not (e.g. they aren't going to justify cheating as "for the greater good" when it's to make the Jedi some personal satisfaction/benefit).

To be more specific, "Practice Honesty" was one of the points in Jedi Code:

"Let there be truth between your heart and the Force. All else is transitory." ― Surenit Kil'qiy

Honesty was the first responsibility that aspiring Jedi were taught. Jedi were permitted to stretch the truth if the situation required it of them, however this was to be done as sparingly as possible. An honest Jedi was always truthful with himself, his Master, and the Council. (src: Power of the Jedi Sourcebook, via Wikia)

Interestingly enough, no explicit requirement to be honest with Watto the slave owner :)

As far as Watto specifically, the guy "had it coming" from a Star Wars protagonist point of view. He was a bloody slave owner! If it's OK to kill a bunch of slavers (Rebellion did that all over the place, see Han Solo trilogy as example), cheating one at a sporting event is a minor thing. To a Jedi, slavery is a Major Bad Juju.

As far as out-of-Universe, Lucas was creating Space Westerns. Blondie lied. Didn't stop him from being The Good :)

Specifically focusing on the ability of the Jedi to alter the minds of others, the main principle is that this power (as with all Jedi powers) should only be used sparingly, with discipline and only for the accomplishment of the greater good.

The officially licensed "The Jedi Path: A Manual for Students of the Force" offers this advice to potential Jedi knights: 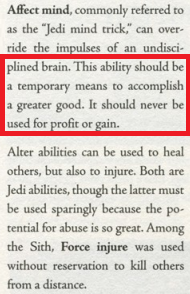 The "Jedi vs. Sith: The Essential Guide to the Force" also offers this advice (edited for brevity and clarity) 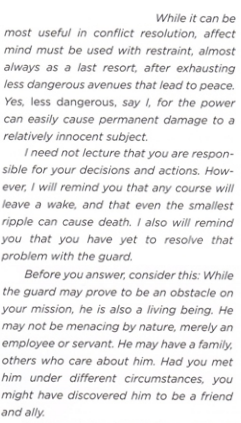 28
Why Didn't Qui-Gon Free Shmi Skywalker?
45
How is the Jedi mind trick not a dark side technique?

42
Why don't the Jedi converse with Darth Maul?
22
Why didn't a more experienced Jedi train Anakin?
46
Why did Qui-Gon advance against Darth Maul without Obi-Wan?
38
Why were so many Jedi risked to save so few (three)?
100
Why didn't Qui-Gon Jinn use his Jedi mind tricks to exchange his Republic credits?
3
Why did Obi-Wan and Qui-Gon Jinn attack Darth Maul unfairly instead of one-on-one?
17
On whom do Jedi practice mind tricks?
1
Are young Jedi more in tune with the Force than Sith and older Jedi?
11
Are the Jedi violating the Jedi Code by being so involved in military and politics?
58
Why does the Trade Federation become so alarmed upon learning the ambassadors are Jedi Knights?