Years ago I read a Conan book but I can't remember the title. I've been searching for the last 2 months but can't seem to locate or remember the name. In the book, Conan had to fight for a young lady's life while she was bound to a pole. She was also the leader of his band, seeking revenge against a guy for kidnapping or murdering her daughter. The fight was gladiator style in an arena against what I believe was a large bull. Any help you can give would really be appreciated.

I think this is Conan the Valorous.

Atzel has rigged the ceremony by having the bull trained to attack a woman tied to a pole:

"But will he attack?" Atzel urged. "He will attack another bull, as any bull will. He will attack a man trespassing into his herd. But it is important that the beast will gore and trample a tethered woman in front of the assembled people."

"All has been taken care of," the man assured him. "Each day a captive woman has been stripped and tied to a stake, and the bull has been tormented by men standing behind her. He has learned to attack them. Now he will attack such a woman on sight."

It is forbidden to use any weapon against the King Bull so Conan wrestles it.

I have not found a match for the lady being bound to a pole, but Conan the Gladiator by Leonard Carpenter has him wrestling a bull as part of an arena demonstration. However, it was a matter of bull-baiting where they're trying to drive a wagon through a treacherous course bordered by crocodiles while the bulls charge. Conan winds up jumping off the wagon to wrestle the bull. 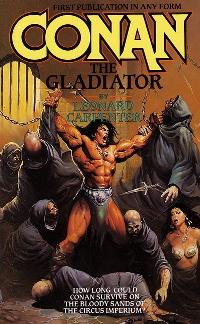 In the town of Thujara in Shem, Conan becomes involved in a street brawl, in which he injures one Roganthus, the strong man of a traveling circus troupe. A combination of regret over the troupe's loss and attraction for another member, the beautiful panther-trainer Sathilda, leads him to offer his own services as a stand-in for Roganthus. Joining the troupe, he accompanies it first to the town of Senjaj and then across the river Styx to Stygia, where it hopes to become wealthy performing in the capital of Luxor. Stygia is usually depicted as a realm of decadent evil, crawling with sinister priests and sorcerers; in this novel, however, the local priests of Set are portrayed more as a fraternity of knowledge-seekers. Unfortunately, Luxor is lorded over by the tyrannical emperor Commodorus, who condemns Conan's troupe to fight for their lives in the arena against exotic warriors and wild beasts. Conan is disturbed at having to kill opponents with whom he feels some affinity, such as rebel Stygians and the Kushite Muzudaya, and is temporarily converted by a priest and fellow captive to an uncharacteristic pacifism. Exercising his military knowledge, he forms his fellow gladiators into a defensive phalanx at one point. The plot, seemingly building to a climactic final battle, is instead resolved by a catastrophic natural disaster, in the course of which Commodorus meets a fitting fate and much of Luxor devastated. In the wake of this event Conan returns to Shem seeking different employment.

Not the answer you're looking for? Browse other questions tagged story-identification conan or ask your own question.

12
Book based on a riddle 'Earth, Water, Fire, Air...'
5
Kid's book about a robot called RUOK
8
Book about a girl who learns she is half Elf, half Human
6
Scifi book where boy finds he has telepathic/telekinetic power, becomes a slave and has to fight against others in arena as aliens champion/proxy
7
Vague memory of a book series about three particular winged beast riders saving their world from an evil lord and his army