Do My Little Pony: Friendship is Magic ponies have coats?

I'd be interested in answers for other My Little Pony generations as well.

nb: There's at least one canonical pinto-colored pony. But I guess that could be chimerism. Or magic.

Based on what we can see in the show, they must have some sort of "fur".

During the "Ponyville Confidential" episode, Snips and Snails get stuck together from some chewing-gum. Later in the episode, it is shown that to get free they had to shave-off their coats. 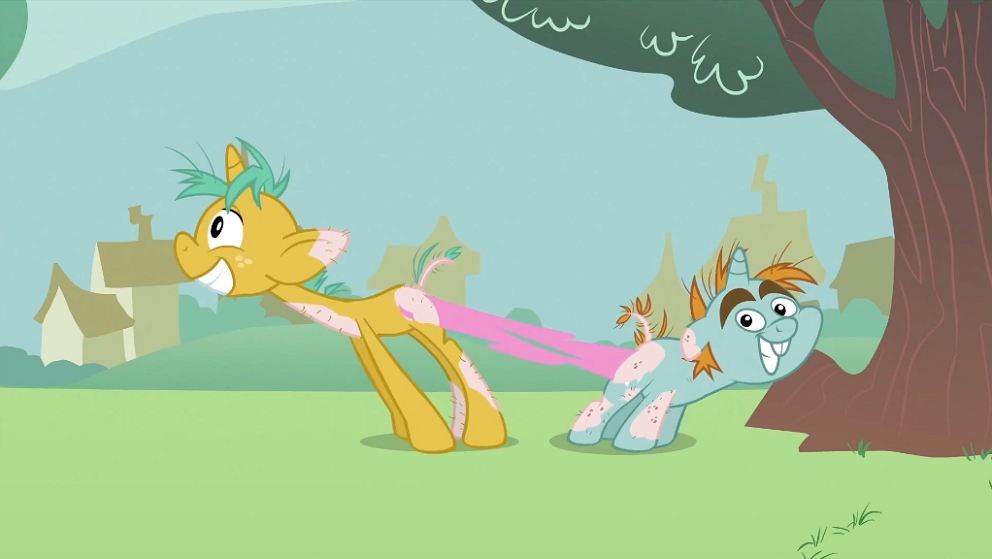 (note: the image here is taken after they get stuck again, in an attempt to drawn the attention of the other ponies)

Especially worth noticing is that in the scenes where Snips and Snails are shown without their coats, the cutie mark seem to be missing too. This would prove that the marks are "drawn" on the pony fur and not directly on their skin.

Season 6 update
During the episode "On Your Mark" (S06E04) we hear Scootaloo say "I mean, it is pretty amazing how the colors just pop off your flank" referring to her cutie mark, so it is safe to assume that there is also some form of "magic" involved that cause the marks to appear on the pony coat.

29
Pony ages in My Little Pony: Friendship Is Magic
11
Why do the Cutie Mark Crusaders live with their sisters instead of their parents?
4
What does the Mirror Pool actually duplicate?
5
Who are the two yellow mares in the season 5 poster?
2
Is there a superhero who has notably super-strong teeth?
9
Who is the green bearded painter unicorn in S6 E4 “On Your Marks”?
2
Does the recognition by the Mane Six’s “Cutie Map” objectively prove the idea of equality as practiced by Starlight Shimmer in Ponyverse as being bad?