How much did transporter risk decline over time?

The Star Trek transporter appeared in the original pilot, The Cage, as a cheaper effect (ex-universe) than having the Enterprise land. - Transporter (Star Trek) 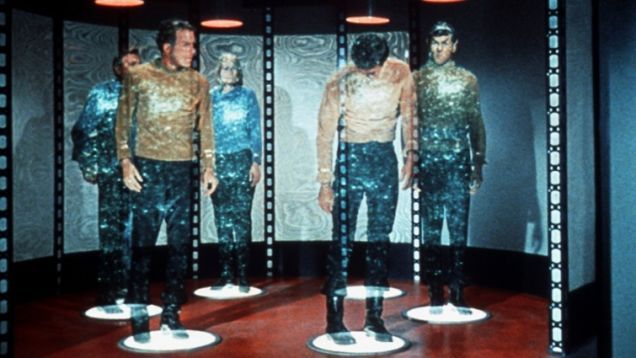 Somewhere around one hundred years spanned the distance between the first biologically safe transporters and the launch of NCC-1701. Dr. McCoy was, perhaps reasonably, afraid—there were still problems: TOS The Enemy Within.

There were a series of staged releases for Federation transporter technology. Memory Alpha has this to say:

Presumably, there were also Mark I, II, III and IV releases, unless some were skipped à la Windows. Also, Emory Erickson, the transporter inventor, must have had a number of pre-deployment alpha and beta versions. I know of at least two, detailed in ENT: Daedalus.

Various risks have been described, including transporter psychosis (ENT: Realm of Fear), total materialization failure for a variety of reasons (Star Trek: The Motion Picture), merging of two people during transport (Voy: Tuvix), and regression during materialization to childhood (TNG: Rascals).

These risks are described as having decreased over time.

[I]n the episode "Realm of Fear", Geordi La Forge states that there have been no more than 2 or 3 transporter accidents in the preceding 10 years. Reference is also made to the advancement of transporter technology in the same episode, where Chief O'Brien states that each individual transporter pad has four redundant scanners whereby in the event a scanner fails the other three will take over, and that he has never lost anyone having been a transporter operator for over twenty years. - Transporter (Star Trek) at Wikipedia

But how much safer was the technology in the later (in-universe chronology) episodes than when first deployed? Is there evidence beyond what La Forge and O'Brien said anecdotally? There were enough late accidents to make me think that transporters must have been very dangerous in the beginning.

Not that this really proves anything, but extrapolating from Richard's detailed answer to this related but separate question, and adding in the accident from Star Trek: The Motion Picture, I count four known accidents from before TNG and seven from TNG on.

But it would be silly to think that transporter technology had become riskier over time, right?

Since you said you would accept anecdotal accounts in lieu of cold, hard statistics, note that the Enterprise episode "Daedalus" deals with the genesis of the transporter and introduces its creator, Emory Erickson:

ARCHER: I have to confess, given a choice, I'd much rather use a good old-fashioned shuttlepod.

EMORY: I'll never forget the protests when the transporter was first approved for bio-matter.

EMORY: People said it was unsafe, that it caused brain cancer, psychosis, and even sleep disorders. And then there was all that metaphysical chatter about whether or not the person who arrived after the transport was the same person who left, and not some weird copy.

TUCKER Which would make all of us copies.

EMORY: I had to fight all of that nonsense, and I'm not going to tell you there weren't costs. I'm living proof of that, but I won. Mankind is better off. Makes everything I've fought for worthwhile.

While Emory is dismissive of the concerns over transporter use, he goes on to reveal however that actual lives were lost during the first uses of the transporter:

EMORY: I sympathise, believe me. During the initial tests for the transporter, some brave men and women were lost. Not a day goes by that I don't think about them. How can I help?

In particular, his own son Quinn was lost in such an accident, and his pattern was trapped in a subspace anomaly for 15 years. In the episode, they manage to rematerialize him, but he dies a few moments later.

So, anecdotally, it would seem that the risk of using the transporter has diminished significantly since Archer's generation.

Not the answer you're looking for? Browse other questions tagged star-trek star-trek-transporter or ask your own question.

9
When is site-to-site transport perfected in Star Trek?
1
How many episodes were there where a transporter accident was an integral part of the plot?

18
How common were non-Federation replicators?
7
What produces the sound of transportation? (Out-of-Universe)
17
How could Harrison beam to Qo'noS?
7
What technological concepts did Star Trek invent?
1
How many episodes were there where a transporter accident was an integral part of the plot?
11
In Star Trek: the Original Series, does the original die in transportation?
14
Why can't the ship's computer manage transporters?
15
How did the transporter malfunction in "Star Trek: The Motion Picture"?
9
When is site-to-site transport perfected in Star Trek?
8
How can a transporter clone have the same mass?