I remember reading a book where one of the character woke to find they were imprisoned, inside a room in a rock, with only a computer arm, controlled by a computer mind, to monitor / punish them. The character (think it was a male) managed to communicate with others, who had subverted the computers controlling their environment.

They were placed inside the rock by a machine that burrowed down through the rock, but which the characters could not then escape through. The characters eventually escape and the imprisonment is only a small part of the story.

I think they were imprisoned because they refuse to join another characters organisation.

Does anyone recognise this story and remember the book title?

I've found the book, it is Influx by Daniel Suarez. 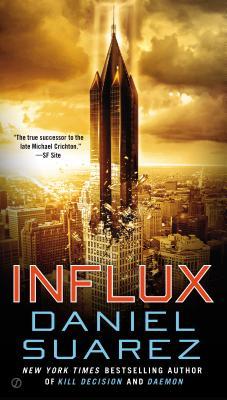 When the inventor of anti-gravity refuses to join the Bureau of Technology Control, he is imprisoned with other geniuses, until they escape and fight back.

This has some similarities with I Have No Mouth, and I Must Scream by Harlan Ellison, except for the part about someone else taking control of the computer. In this story, the computer was entirely in control.

2
Book about government department controlling the release of advanced technology