Do Superman's abilities, including super-speed, affect his thought processes? Is he smarter than most or does he think faster than humans because of any combination of his super powers?

In the DC Animated feature film All-Star Superman (2011), Superman is shown with genius level intelligence as he was developing a cure to his own illness as well as creating a 24-hour-Power serum to give to Lois as a parting gift.

This intelligence was probably from the intense exposure to the yellow sun that was the cause of his illness in the first place so, technically, it is an effect of his super powers.

In the canon DC Universes, Superman's raw intelligence is considerable but rarely challenged. Kal-El is the son of two of Krypton's top scientists but his time on Earth, in most continuities, he is not challenged to utilize his super-intellect to its greatest capacity. The greatest standard display of his super-intellect is his Fortress of Solitude.

Pre-Crisis Superman, particularly in the 1960s and early 1970s was the most scientifically inquisitive and skilled version of the character.

Superman, as he has been written from the Post Crisis Era to the last iteration of the DC Universe, was not considered to have as great a superhuman intellect. The early Post-Crisis version of the character were meant to emphasis the MAN, not the SUPER, so his life as Clark Kent was the focus of these early stories.

His current Fortress is still an inpregnable stronghold filled with technology from all over the galaxy. While he may not be considered a super-genius, his ability must be significant enough he is able to rebuild and maintain his Kryptonian stronghold on Earth.

That said, it is obvious that his natural abilities far exceed a Human's for a variety of reasons he displays every time he uses his powers.

People often look at the graphic novel/movie version of "All-Star Superman" as a sample of Superman utilizing his superhuman intellect. While he does use his abilities to their fullest there, this particular Superman is an Elseworlds version of the character, not a mainstream continuity version. The DC Animated feature film All-Star Superman was based on the comic book series All-Star Superman. As noted in Wikipedia:

All-Star Superman is a twelve-issue comic book series featuring Superman that ran from November 2005 to October 2008. The series was written by Grant Morrison, drawn by Frank Quitely, digitally inked by Jamie Grant and published by DC Comics. DC claimed that this series would "strip down the Man of Steel to his timeless, essential elements".

The series was the second to be launched in 2005 under DC's All-Star imprint, the first being All Star Batman and Robin the Boy Wonder. These series are attempts by DC to allow major comics creators a chance to tell stories showcasing these characters without being restricted by DC Universe continuity. [emphasis mine]

Super speed has to influence the speed of his thoughts or he would run into any kind of obstacle (because his brain wouldn't be able to avoid them).

At the same time, people manage to hit him which probably wouldn't work if he saw the punch coming. You could argue that he doesn't have to care for an uppercut (being invincible) but what about Luthor punches him through a building? Doesn't Superman care about the property of other people? Not to mention the joy of teasing Luthor...

So my impression is that Superman's brain speeds up with the rest of his body when he "switches" to super speed but he's not always using it.

So in-universe, all his abilities should influence each other but in a comic, that would be pretty boring: Problem pops up, Superman thinks a couple of weeks about it (internal time), Superman solves the problem one second later (external time). All fights would be ridiculous staggering of his enemies trying to hit him while he does whatever he wants to.

Big comic fan and student, with a working knowledge of most things Superman. Believe it or not, this is something I've given some significant thought to... and, brazen as it may be, I think both the Post-and Pre-Crisis reasonings are actually... not wrong, but lacking in correctness, a bit. I just never bought that he gets "all" his powers from the yellow sun, full stop. There HAS to be more to it!

This is ESPECIALLY TRUE in terms of his possible mental powers; as a more advanced race, biologically, it simply makes sense that his brain would be evolved to a greater capacity. This would affect both his physical, and cognitive function.

Why does Superman have powers? You touched on the 2 big reasons everyone knows about:

I postulate that there is a third reason, which essentially goes back to his Kryptonian physionomy, not just his cell structure.

In a 2000 reprint Millennium edition of Superman #1, 1939 , it reads that Clark's main powers, as evidenced on one 8-panel page are that he could, and I quote:

Hurdle sky scrapers, Leap an 8th of a mile, run faster than a streamline train and nothing less than a bursting shell could penetrate his skin!

Apparently, this Pre-Crisis account of near physical "perfection" accounted for super strong senses, as well (telescopic, if not microscopic & x-ray vision, at least).

This goes to what I consider the 3rd, base source of at least a portion Superman's powers

In other words, if there was no yellow sun and equal gravity, and Superman was placed against an earthling of equal size, height, weight and mass, his muscles would still work, on average, 10-20 times better and longer, making him an average of possibly 20 times stronger.

The mental powers of telepathy or "thought projection" would also explain his "random" powers in the Fortress of Solitude in Superman II; they were all mental projections, which he had better control of in the Fortress via its technology; the holograms were actually "psychic copies", and the "Giant S" was just him projecting a defensive thought "shield" against Nom. It's not far fetched; in the movies, Jor-El was essentially a mental imprint kept in a Kryptonian crystaline computer. And we know that it's possible to program a computer based on the algorithms of the human brain. An advance civilization tens of thousands of years ahead of ours which has harnessed telepathy and thought projection may have found a way to copy those thoughts as energy patterns, and store them in crystalline capacitors.

Anyway, all of this is just my own theorizing, cobbled together from various sources and scientific conjecture. Superman's powers have been handled by greater minds than my own on many occasions.

Superman has been documented as doing computations as fast as a having the mental computation speed of a Radio Shack TRS-80 (later known as Tandy) computer.

In this weird product placement crossover, DC had Superman team up with Radio Shack's Tandy Computer Whiz Kids to save Metropolis. After Superman lost his super-speed calculation ability (due to inhaling krytonite dust, which seemed to leave his other powers largely unimpaired), he had to have young Alec and Shanna take over his super-computation abilities. Superman would collect data about a problem using his super senses, then radio the information to the Whiz Kids, who would use their computers to figure out how fast Superman needed to fly (or whatever) to deal with the problem.* 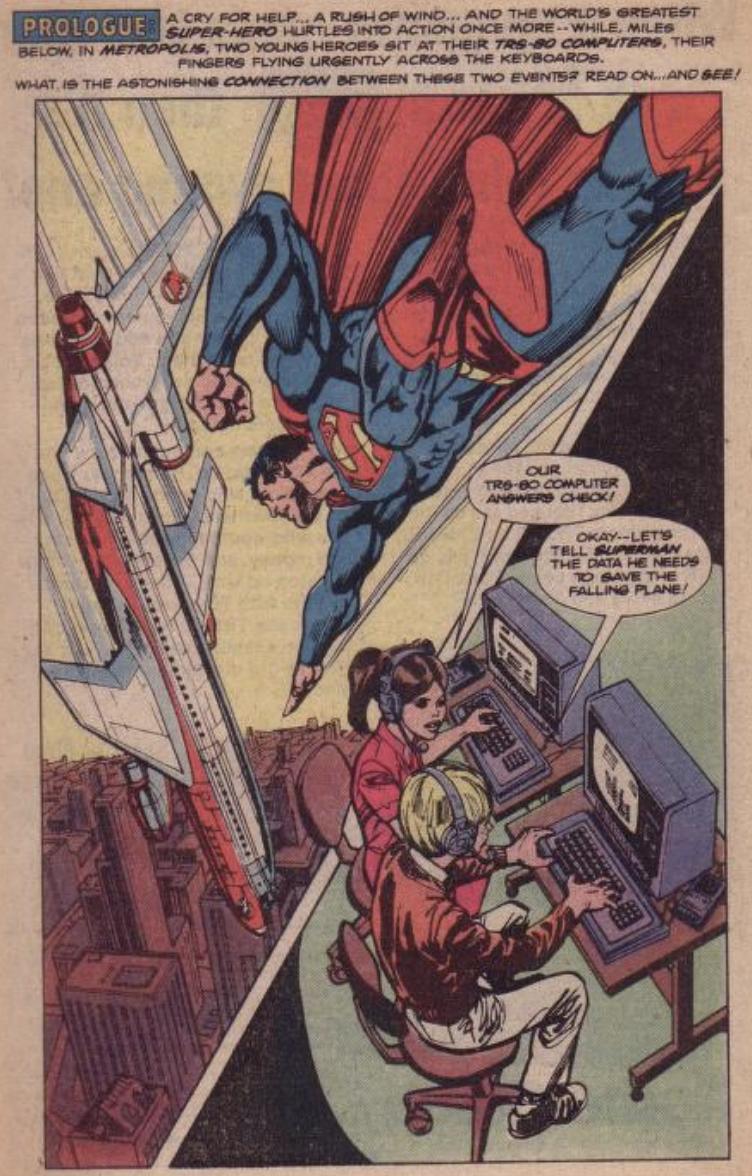 The archive.org copy of the comic that I linked to above was a standalone comic that was printed by DC but distributed free through Radio Shack stores, just like the other Whiz Kids comics. (By the 1980s, Radio Shack was in trouble, and they were desperate to drum up interest and get traffic into their stores. They also had a loyalty club where you could get a free dry cell of your choice every month.) However, this Superman crossover was also reprinted in a regular Superman comic (after the issue's main story, making the whole issue a double, presumably with Radio Shack absorbing the extra cost). There were apparently also DC crossovers with Supergirl and Wonder Woman, but I don't know if those were ever included in regular DC issues.

If you think about it, Superman's abilities are a combination of his dense molecular structure combined with his ability to absorb radiation from our yellow sun (also an effect of his physical makeup, being inherently evolved to function in a red giant system).

His brain is as molecularly dense as his body is, so it stands to reason that his memory and cognitive functions are as enhanced as his physical prowess. In fact, I believe that's how his non-strength powers work; they are a form of telekinesis that allows him to manipulate gravity and molecular activity.

He's not just strong enough to lift a semi truck from the front bumper, he also subconsciously affects the gravity surrounding it so that it doesn't buckle under its own weight. Likewise, his "super breath" is a form of molecular level telekinesis that he performs, while the "blowing" is just a way to physically mainfest it – sort of like the way that other telekinetics use their hands to focus their power, even though their hands have nothing to do with it.

As it was explicitly stated in several encounters with Flash, Superman's ability to comprehend motions at super speed is severely lacking compared to that one of Flash. Seing as he is able to catch bullets and generally avoid too much collateral damage while running at super speed it is likely that he has that ability to a certain degree.

I can visualize assorted moments from Pre-Crisis Superman that address this question, but cannot lay hands on actual references and sources. Except for the following. It doesn't speak to Superman having exceptional intelligence, per se, but it certainly illustrates how his mind is fully as fast as his superspeed reflexes. "Superman" #188 (1966) 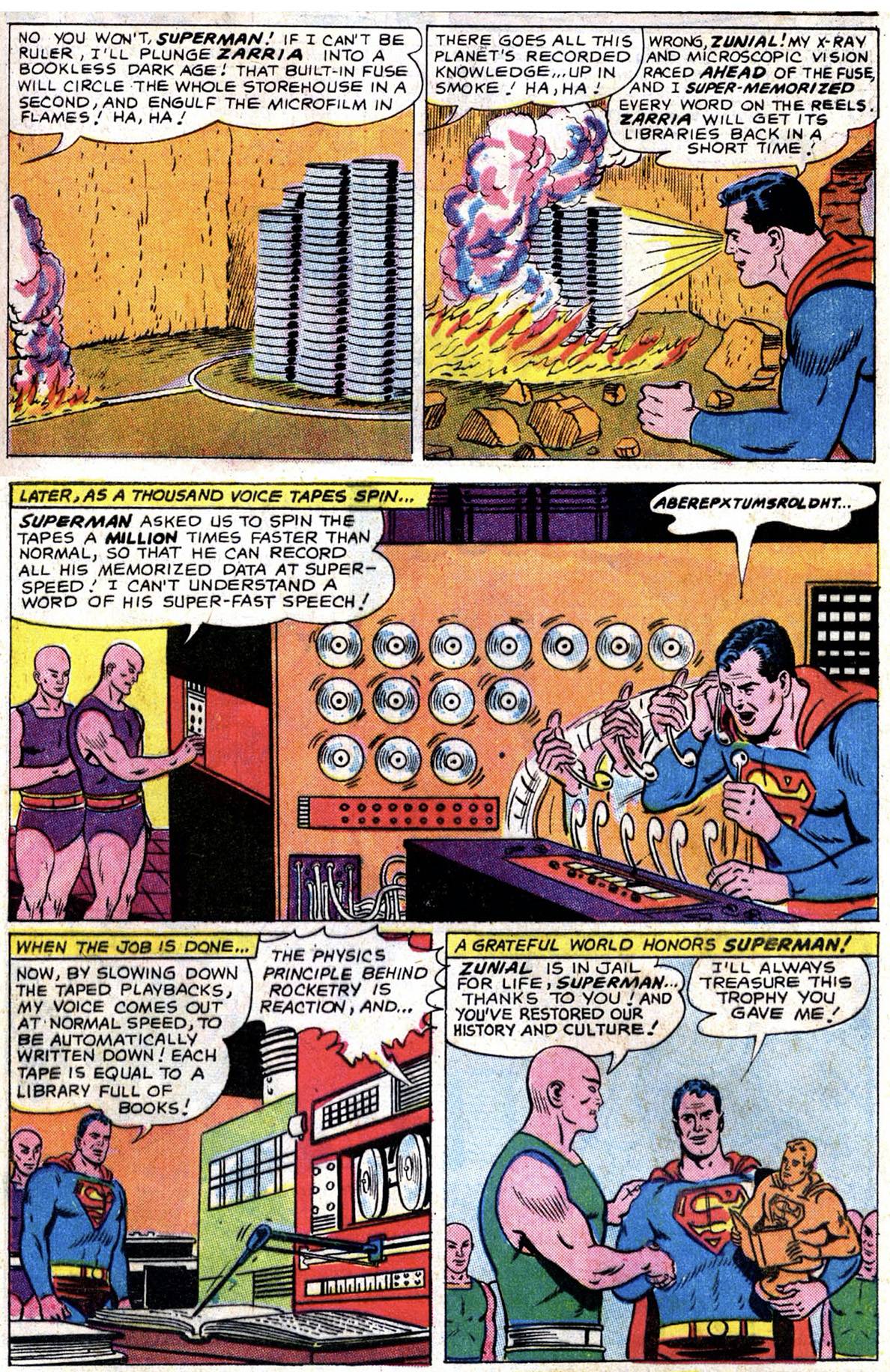 18
Brainiac has a twelfth-level intellect. What level intellect does Superman have?
5
In Justice League: Doom, Why Didn't Superman gain the same illness as in All-Star Superman?

5
Are there examples of mutants or meta-humans who live normal lives?
27
Is Superman really super compared to other Kryptonians?
10
Can The Flash think faster?
6
Has Superman ever escaped a black hole?
6
Can the Flash use his powers and super speed without the Speed Force (e.g. outside the DC universe)?
13
How did the Kents raise a super-baby?
4
Can Parademons retain the original being's abilities?
8
Even with his powers, doesn't Superman train and work out?
5
Is there an in-universe reason why Superman is not flying all the time?
10
Superman comic story where he wears a different costume and has an actor pretend to be him