Who came up with the Dwarven Windlance?

In The Hobbit, the dragon Smaug has a thick hide, described as impenetrable armor. However, he has one weakness: a single bare spot, located in his underbelly. In the books, this weakness is unveiled through Bilbo's flattery and Smaug's arrogance, from whence a little bird told Bard the Bowman of it. Bard then shoots down Smaug using his trusty bow and a black arrow which had been passed down to him:

Arrow! Black arrow! I have saved you to the last. You have never failed me and I have always recovered you. I had you from my father and he from of old. If ever you came from the forges of the true king under the Mountain, go now and speed well!

In the movie The Hobbit: Desolation of Smaug, however, the Black Arrow was a ballista bolt, with an appearance similar to the metal used by Sauron's own. The killing of Smaug is accomplished with the use of a Dwarven Windlance, a ballista expressly said to be designed for killing dragons when used in conjunction with a Windlance, and the flaw in Smaug's armor was said to be caused by a previous attempt on his life with that same setup, by Bard's forefather Girion. 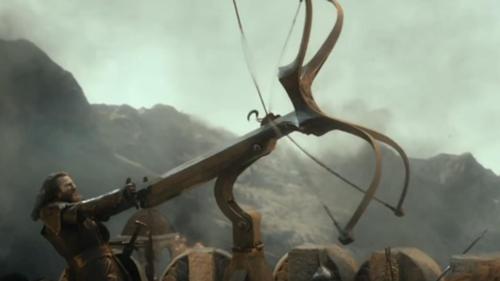 As Desolation of Smaug had 4 screenplay writers -- 3 working over Del Toro's own original screenplay -- the question of where the idea for the Windlance originated has come up. Whose screenplay first brought the Windlance (and artillery-sized Black Arrow) into play?

Peter Jackson personally takes credit for this one in the movie's commentary track.

Jackson: You know the black arrow's interesting cause it's gonna, y'know every time I thought about an arrow killing this bloody huge dragon, especially since Smaug became huge (which we'll talk about), but that means that since the dragon's big, that the arrow had to get big too. It just wasn't gonna work with a puny little normal arrow so the whole notion of the black arrow became almost more of a black lance, and then you needed a special bow to shoot it, which is the wind lance, a great name, I think you guys (indicating Boyens & WETA) came up with the name "the wind lance", which they've got mounted on these towers, like a sort of anti-aircraft system, like flak guns, flak towers all around.

Boyens: You still need to be a bowman though to be able to shoot it though.

Transcription mine, with apologies

10
How did the "original" Black Arrow work?

18
Did Tolkien originate the idea of dwarven women as being visually indistinguishable from dwarven men?
8
How closely did the Black Speech match the subtitles?
5
Why does Smaug associate lake town with Black arrows?
46
What exactly happened to Thranduil's face while he was arguing with Thorin?
10
How is Gimli from Lord of the Rings connected to the dwarf in The Hobbit?
3
Why do the dwarven hoards of Erebor contain elven heirlooms?
6
How was Bard so accurate with his shot that killed Smaug?
7
What's more famed: Elven or Dwarven armaments?
0
Who is 'you' in "I See Fire" from "The Desolation of Smaug"?
8
Who came first: Tom Riddle, or Voldemort?