What was Miller's intention for this scene of The Dark Knight Returns?

I never knew what to infer from a certain scene (or panel) from The Dark Knight Returns by Frank Miller related to the ransom of the Ridley Chewing Gum heir.

After getting rid of the big mutant Batman grabs the mutant's machine gun and shoots another, to rescue the kid. She threatened Batman "I'll kill him", Batman shoots, then there is this panel I don't know what to think of: Batman cradles the child to his chest emblem and he says "I believe you". 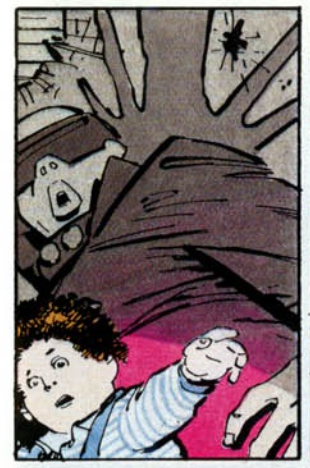 There is an interpretation of this scene in the animated movie of The Dark Knight Returns, but this movie is changing some other things from the comic book here and there, and I don't know how much is true to Miller's original intentions in this scene.

It is not only that Batman is using a fire arm here (which he clearly hates). The lack of explanation and Miller's drawing style make the panel quite ambiguous (at least for me). That thing on the wall seems to be blood (but, given what happened to mutant Spot the blood may not be necessarily hers). Is she dead (Batman believed she would kill the child and there was no other thing to do but to kill her)? Is she just wounded? In shock or fear? Given Miller's style and what we have, is it even possible to know what happened for sure?

What was Frank Miller's intention on this panel?

I find it hard to believe that Batman killed the Mutant. Later he tries really, really to push himself to murder the Joker and even then he simply couldn't do it. If Batman had already commited murder, his internal narration would have acknowledged it during the scene. Furthermore, there is absolutely nothing in-universe after that panel indicating that Batman had killed, neither he was charged by the police nor the media makes any mention of it, whereas both happen to great effect after the Joker fakes being murdered by Batman.

The most likely explanation is that Batman simply shot to wound (I recall reading that Miller himself mentioned that was what happened, but can't find the source), or that he shot right next to the Mutant's head (you can see a bullet hole there!) and she was intimidated and surrenderd. That fact that Batman grabbed a gun and fired it against another person (even without killing her) already is a huge deal for him.

TL;DR - This older Batman is brutal and uses firearms when required... but still tries not to kill.

Whether or not Batman killed the Mutant is debatable, but it seems fairly certain that he definitely shot him/her with the rifle. You have to remember - this version of Batman is older and has a far shorter temper when it comes to dealing with criminals. He uses firearms on several occasions throughout the graphic novel, and quite often leaves criminals with severe injuries.

As noted in the accepted answer, it's likely that he shot the Mutant in the shoulder. The blood is grayed out, but it's definitely the Mutant's blood being splattered onto the wall behind him/her: 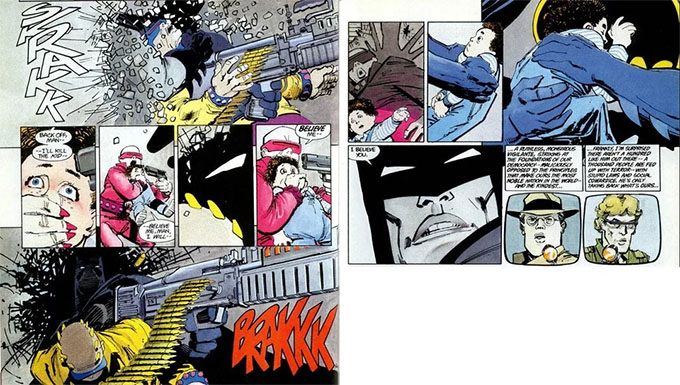 Whether the Mutant survived the injury or not, at this point in his career, Batman is more concerned with results. He leaves many criminals maimed, possibly permanently, which is something the younger Batman would've avoided when possible.

By “could have” I mean it is very much ambiguous as to what actually happened. We never see this Mutant again, nor do we have Batman bring it up.

Also Miller doesn’t actually emphasize the “no-kill” rule. If anything, he emphasizes that Batman is crazy. He was mostly likely lying about the “rubber bullets” when he was gunning down the Mutants. That’s why he holds off on executing the Leader. And then he definitely snapped the Joker’s neck. And most likely killed him. Not paralyzed. Killed. That last bit was Batman’s fractured psyche desperately refusing to believe he has crossed his line. Because of all the kills, this one was definitely murder.

There is nothing ambiguous in that panel; it's clear as day that Batman made an exception to the rule and killed the mutant to save the child. Miller wouldn't have drawn that huge splatter of blood if he intended to make look that she had survived. Also a man inexperienced with guns would never have the precision to shoot one bullet from a freaking machine gun (remember he struggled to aim a pistol), and ONE bullet on the shoulder wouldn't make that splatter. The truth that the "Batman Does Not Kill" crowd denies to death is this: The Dark Knight Returns Batman is a hypocrite. He'd already crossed the line and was lying to himself at that point.

That bullet hole has no wet stain around it. That’s below the hole. There’s also no blood spatter on the child either.

He put a round in the wall and the mutant either fainted or just slid down the wall in fear. Personally, I think she pissed herself and that’s what the wet stain is. As if Frank or Lynn would’ve “forgotten” the blood. Batman has to reach down to take the kid off her, so she’s sitting in the floor then. Note that no-one in the media, public or police ever mentions murder, let alone murders, by Batman.

Batman absolutely killed her, and it is not the first time in TDKR that he killed someone either. Earlier in the story he threw a mutant into a Neon lamp in the middle of the pouring rain, electrocuting them.

But look at the panels here and the pages leading up to it, the wall behind the mutant is stark white. There is then a big splat and a bullet hole after the shot. The mutant is on the ground in a puddle of blood and we never see them again. If this was ANYONE but Batman, the read of that scene is the mutant is dead, unambiguously.

The Dark Knight Returns Batman is a different person than he used to be, he speaks in ideals, but does not keep them, he has a very slight grip on his sanity, and though debated, I think he absolutely kills the Joker in Chapter 3. Miller was the artist and his wife at the time Lynn Varley was the colorist. Not one bit of the art was done by chance, and the scene with the mutant above is the same way.

Also recall that later versions of this character that Miller wrote, either in Dark KNight Strikes Again, or All Star Batman and Robin, don't have an aversion to killing.

Always thought that Batman disarmed the mutant by shooting the hand that was pointing the gun towards the child's forehead. Your Batman can be as badass as you want it to be.

Batman could have easily killed her. A warning shot is nonsense. That wouldn't be as serious. Not a reason to have the image in black and white. A wounding shot wouldn't be a big deal either, considering how many massive injuries he has inflicted over the years.

A fatal shot? That means something. Especially since we never see her again.

His intention? Well, it sure as hell wasn't killing her. Even though she is homicidal mutant scum. Miller makes it a point, twice in DKR, that Batman doesn't kill. Once with the mutant leader, and later with the Joker.

The animated interpretation is great, probably what Miller was going for.

Not the answer you're looking for? Browse other questions tagged dc batman dark-knight-returns frank-miller or ask your own question.

9
Is Batman in "The Dark Knight Returns" acting out of character compared to the "canon Batman"?
6
Has Superman ever had an army?
1
Was the chaotic ending of "Dark Knight Strikes Again" intentional?
9
Was there a comic where Batman and Robin were attached to a giant piano?
4
How did Batman fake his death in The Dark Knight Returns?
18
In The Dark Knight, what happened to all the bank robbers?
6
Has Batman ever unintentionally/accidentally killed someone?
6
For what reason did Max Schreck want to build a capacitor in Batman Returns?