What are all these items from the Narnia books?

My favourite edition of CS Lewis's Narnia series has covers featuring a variety of significant items from the books wrapped around by twining leaves and branches, as shown in the image below (from The Voyage of the Dawn Treader, although it's only the centre panel that changes from book to book): 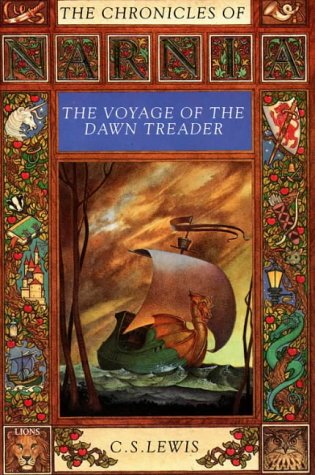 Obviously I can identify some of these items and characters - the lamp-post, Jewel the unicorn, Susan's horn - but can we make a complete list of what they all are?

What are all the items along the left and right sides of this book cover?

Also, interwoven throughout are Toffee Apples from the tree in the garden in The Magician's Nephew.

The four corners are:

I have this edition of the books, and it was the one I grew up with so I was able to look in better detail than the picture provided. This is also not the first time I have looked at them for hours deciding what I thought they all were.

Most of these are clear, but there are a couple that I am not 100% certain of, so I will outline my reasoning.

The serpent could be a dragon or sea serpent from The Voyage of the Dawn Treader, but the Silver Chair reference seems more likely as it was a more significant character, and matches closer with the illustration in the book.

Glimfeather, is to my recollection the only named owl with a speaking part.

The White Witch's dagger is important in both The Lion, The Witch and the Wardrobe and The Voyage of The Dawn Treader, and I can't think of another dagger of such significance.

Again, the most significant book in any of the books would be The Magicians Book from The Voyage of the Dawn Treader.

From what I can see, the castle is Cair Paravel, the castle with the four thrones. There's Susan's Bow and arrows, Peter's sword and shield, and the ship on the side is the Dawn Treader herself. The upper left corner is Lucy's dagger. There is also Lucy's cordial made from the fire flower. The mouse may be Reepicheep, and there's a badger head. That's all I can see right now.

The dragon could possibly be the one the Eustace changes into during "The Voyage of the Dawn Treader" Alternatively, it could be the Sea Serpent from the same book.

The apples are from Prince Caspian. The four Pevensie children land in overgrown ancient Cair Paravel and the apple orchard has overgrown. Apples are all they have to eat for several meals.

Not the answer you're looking for? Browse other questions tagged object-identification the-chronicles-of-narnia cover-art or ask your own question.