Why did Dumbledore choose to stay anonymous?

In book 1 Dumbledore gives Harry the invisibility cloak of his father as a Christmas present, explaining what it is and giving advice on an anonymous note. (It is also emphasized in the book that the note is indeed anonymous rather than implied as in the movie). 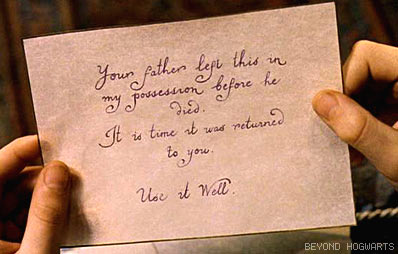 Why did Dumbledore choose to stay anonymous in this case?

I can neither think of a reason why he would nor find any references on the matter. Thanks for your insight in advance!

Dumbledore didn't want people around Harry to think he was Dumbledore's favorite. It was never covered in Sorcerer's Stone, but it does give this.

When he had found his voice again, Harry said, "And the invisibility cloak - do you know who sent it to me?"

"Ah - your father happened to leave it in my possession, and I thought you might like it." Dumbledore's eyes twinkled. "Useful things... your father used it mainly for sneaking off to the kitchens to steal food when he was here."

It basically tells us that Harry didn't even know who it was, and that Dumbledore did it because of his father.

Maybe Dumbledore thought that it was still not the right time to directly interact with Harry, of course later on the story we see that Dumbledore admitted that the one who sent him the cloak, but if he were to interact directly it would seem that he might be favouring Harry, or Harry would go look out for Dumbledore. Maybe i am thinking about it too much but unless you ask the author with simple guess you can only speculate.

Not the answer you're looking for? Browse other questions tagged harry-potter albus-dumbledore invisibility-cloak or ask your own question.

22
How Did Dumbledore Stay in Limbo?
5
Why couldn't Sirius leave Grimmauld Place in the Order of the Phoenix?
9
Why did Dumbledore choose to use the Elder wand rather than his previous one?
14
Why did the Order bother to guard the Prophecy?
18
Was Harry's Invisibility Cloak a REAL Deathly Hallow?
73
Did Dumbledore lie to Harry about how long he had James Potter's invisibility cloak when he was examining it? If so, why?
3
Why did James Potter let Dumbledore borrow his invisibility cloak, knowing his child's life was in danger?
8
What was Dumbledore's reasoning for placing the Mirror of Erised in a random classroom for most of the year?
25
Why did Dumbledore pretend to not understand post-time-travel Harry and Hermione?
2
Did Dumbledore decide that Harry should stay with the Dursleys?