Why did Starswirl the Bearded invent an 'amniomorphic spell'?

In My Little Pony: Friendship is Magic (S2 E4, Luna Eclipsed), one of the main characters, Twilight Sparkle, was extolling the virtues of a wizard from ancient times, called Starswirl the Bearded. She mentioned that Starswirl was the inventor of a spell called the amniomorphic spell. Being a curious type, I looked up the word amnion, as I had heard the word before and it was obviously one of the root words of the spell's name, but to my dismay it means the membrane surrounding an unborn baby. In combination with the other half of the spell's name, morph, this is quite a disturbing combination of words for a spell in a G-rated show.

So, my question is, why would someone (who was a revered historical figure and thus probably not a psychopath) invent a spell to mess with unborn babies? And why does Twilight Sparkle use the spell as an example of how amazing Starswirl is (given that most characters in My Little Pony are not R13ly insane)? My best guess is that the spell has some sort of medical application, though what I have no clue.

In S1 E23 “The Cutie Mark Chronicles”, we learn of how Twilight Sparkle got her cutie mark. She got it on an entrance exam to Princess Celestia's School for Gifted Unicorns, in which she had to cast a spell to make a dragon egg hatch. Twilight was eventually able to solve this task, and this unique experience has changed her whole life: she got her cutie mark, and became Princess Celestia's personal protégé. It would be hard to underestimate the personal significance of this exam to Twilight.

It seems clear that making the egg hatch is what the examiners expected, because there was a sign on the carriage holding the egg indicating so. 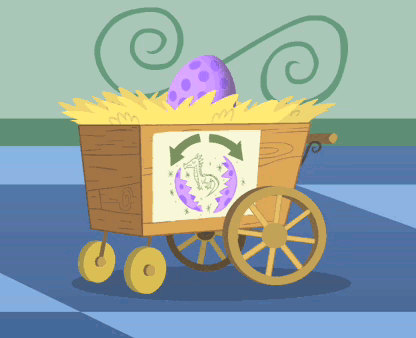 Now as InternetLogic already notes in the question, "amnion" is a latin word for a membrane covering the embryo of mammals and reptiles. It is likely that dragons, as they appear in this episode, are among these groups. So it seems like a reasonable guess to me that the amniomorphic spell is what Twilight used to make the dragon egg hatch. Since this spell has changed her life, it is no wonder that Twilight mentions it first when listing the notable achievements of Starswirl the Bearded.

This is only a guess, but since the amniomorphic spell is never mentioned again in the show, I don't think we can tell anything more definite about it.

Statement from the writer

A fan theory1 claims that the amniomorphic spell creates pots, based on the alternate etymology below. Since Starswirl has a beard, he is “hairy,” and since he invented a spell for making pots, he is a potter: a hairy potter. This would make the spell a Harry Potter joke.

From this interview2 with M. A. Larson, the writer of that episode, he denies that the name of the spell was intended to be a Harry Potter joke, although he likes the idea. He didn’t state any source for the origin of the word.

If we accept his joking agreement as a retcon, then the amniomorphic spell creates pots.

Without a definitive statement from the author, we can look at the etymology of amniomorphic.

All English words that start with amnio- relate to the amnion, a membrane surrounding an embryo.

Definition of -morphic from the Oxford English Dictionary:

-morphic: Forming adjectives with the sense ‘having a form or character denoted or described by the first element of the compound’.

A straightforward reading of the word would be, “having the form or character of an amnion.”

Someone named Jex3 decided to dig deeper into the prefix amnio-, trying to find other possible meanings.

Etymology of amnion from the Oxford English Dictionary:

Etymology from the Online Etymology Dictionary4:

amnion: Modern Latin, from Greek amnion “membrane around a fetus,” said to be originally “bowl in which the blood of victims was caught” [Liddell & Scott], which is variously said to be of unknown origin, from ame “bucket,” or a diminutive of amnos “lamb.”

From the etymology, the word presumably means something like, “related to the form or character of an amnion, a lamb, or some type of bowl or bucket.” An anmiomorphic spell could do anything from turning something into a bucket to making someone sheepish (the character of a lamb). In any case, it wasn’t an intentional reference to Harry Potter. It’s entirely possible that the writer just made the word up, without considering its etymology or deciding what the spell was meant to do.

Occam's razor: amnio morphic.... if "amnio" refers to an egg, simply stated, an egg-hatching spell. Or perhaps a more generic spell that causes eggs to hatch, seeds to germinate, etc.

10
What was Star Swirl the Bearded's spell *supposed* to do?

11
Why do the Cutie Mark Crusaders live with their sisters instead of their parents?
1
Why didn't Twilight notice the cause of her friends changes sooner?
10
What was Star Swirl the Bearded's spell *supposed* to do?
2
How did Princess Cadence rule over the Crystal Empire if it had vanished?
36
If the ponies are vegetarian, why do they raise pigs?
3
Why do the Apples have such a strong accent?
2
Why are the pony engineers pulling the train in Over a Barrel?
4
When was Starswirl the Bearded alive in relation to the events of the MLP: FIM TV show?
9
Who is the green bearded painter unicorn in S6 E4 “On Your Marks”?