I saw a movie in the early 80's that could be from the late 70's and I remember that the crew had at least five or six members. So it's not Strange New World (just three members) as one answer suggested, nor any of the other like Planet Earth or Genesis II. They were all men, or maybe there was also a woman. I saw it on TV just one time and never saw it again. It was a simple plot, but really well done and with a very unexpected finale.

The crew return to earth and like the other question says, they don't receive any kind of signal. They don't know what happened and everything looks deserted and depopulated. In finding some ruins, they seem to understand that there's been a nuclear war. The movie is about their struggle to find out what happened and determine whether there's any civilization left. They have almost no food and water. They begin to lose hope, and even fight with each other. Some become ill and die. And maybe, in fighting, someone gets killed. It was all very dramatic.

I don't remember the dialogue, the characters, or the scenes, but I remember the end quite well. At the end, just one of them is walking in the desert and falls down exhausted and ready to die. After all that's happened, you think it's really the end, but then he kind of wakes up and seems to hear something and, after walking a few steps more, behind the next dune he starts seeing the blurry sketch of a city not so far away — blurry because of the heat of the desert. And the movie ends showing the man walking through a street of the city where people are walking and children are playing, not paying attention to him, and leaving you to wonder why they aren't helping him even while you are happy that he survived.

I watched the same movie as a child and really enjoyed it! After lots of googling I believe it was the 1977 German TV film, Operation Ganymed. That link is to a German version of the page, but there is an IMDB page with a summary in English: 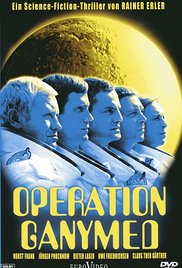 A spaceship returns to Earth after several years of space exploration and finds it desolate. Landing in what they believe is Mexico, the crew decides to travel north, and try to find out what happened to Earth during the years they were gone.

One of the user reviews mentions their breakdown:

Five astronauts return to earth after more than four years on a catastrophically failed mission to Ganymede during which 21 of their team perished. When no one answers their calls, they perform an emergency landing in the ocean and finally get to a rocky desert coast that looks much like a strange planet. While they did find some evidence of life on Ganymede, they have a hard time doing so on Earth, until they surmise that the human race must have destroyed itself in a nuclear war. Their despair over the apparent utter futility of all that they have endured leads them to madness, murder and cannibalism.

An English dub of the film is available on Youtube:

And it looks that, around the 1 hour 32 minute mark, the final astronaut does stumble into a civilization, although the frequent hallucinations and flashbacks leave the ending ambiguous.

16
Movie featuring space crew, murders, a forbidden door and ending with a revelation
17
90s movie about people confined to the dark side of a 'half earth'?
8
Sci-fi movie identification - men fight in futuristic chairs and get zapped to death
6
1990s post-apocalyptic independent movie with religious elements?
10
Movie Identification: Post Apocalyptic Virtual Reality and Inception
10
Post Apocalyptic book about “clones”