Anime about a female who races spaceships in duels, father was also a racer

I remember watching an anime back in my childhood, and I am not sure, but I think it was about a girl whose father was a racer in a universe where they race with some kind of spaceships. The girl had to go to another planet, where she became by accident the main racer of her team in a big tournament. Every race was a duel where the ship can have weapons in it. 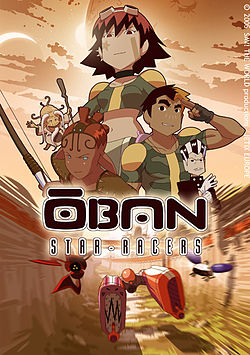 In the year 2082, Earth has been invited to compete in the Great Race of Ōban, an intergalactic race whose winner can be given "The Ultimate Prize", supposedly granting any wish in the world—even bringing back a loved one. The invitation comes from the Avatar, a mysterious entity who ends hostilities between Earth and the sinister race of the Crogs, in return for Earth's entry into the race. Eva Wei, an Earth student, escapes boarding school to find her father, Don Wei, president of Wei Racing and the best race manager in the world. Having left his daughter in the care of the boarding school for many years without ever visiting, Don Wei does not seem to recognize Eva as his daughter. Unable to tell her father who she really is, she lands a job as a mechanic in his team under the name "molly"

Girl racer, dad racer, something about them being separated. It's all there; have fun watching.

9
Trying to find an anime I watched in my childhood about samurai/swordsmen
8
Does anyone remember this old “trapped in a video game” anime?
5
Anime series with the underdogs in school being selected to use a new type of mecha
12
Anime about half-human girls who fight monsters?
4
Anime with a ship in a sky and people with abilities/powers fighting
8
Sci-Fi/Fantasy Anime about a girl who turns into a world-destroyer
6
Looking for an older maybe 20 year old Mech Anime