Has the Federation ever destroyed a planet?

The Federation is obviously capable of doing this, but have they? Such an extreme action need not be a belligerent act. It could be undertaken to save a nearby star system from a 'virus' originating from that planet, etc.

'Destroying' the planet could mean everything from destroying the atmosphere to turning it into a floating debris cloud. Basically a deliberate act making it incapable of sustaining planetary life or unmaking the planet.

The closest the Federation has come was when Sisko poisoned the atmosphere of a Maquis settlement with four hundred kilograms of tricobalt resin, making it uninhabitable to Humans but not to Cardassians. (For the Uniform) 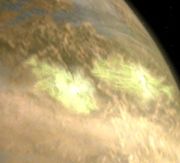 In the finale episode of Star Trek: The Next Generation (TNG: All Good Things...) the actions of Federation Captain Jean-Luc Picard result in the creation of paradoxical anti-time eruption in the Alpha Quadrant. His incompetence leads to the Earth becoming incapable of sustaining planetary life.

Admittedly this was more 'planetary manslaughter through gross negligence' than actual 'planetcide' but the result is much the same. 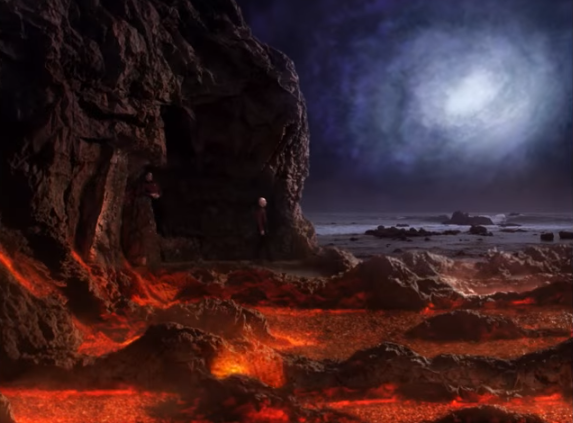 In the Season 1 finale of Enterprise, "Shockwave", the Enterprise accidentally ignites a component of the planet Paraagan II's atmosphere and destroys all life on the planet.

The Suliban really did it to get the Enterprise crew in trouble.

Likely not canon, but Kirk/Enterprise destroyed an entire planet (converted it to debris, a la Deathstar) in "Operation -- Annihilate!", published in Star Trek 2 by James Blish. The story was based on an early version of the script; the version that was filmed and aired didn't trace the enemies back to their home planet and destroy it, but the version that Blish wrote into a story did.

Thanks to Gaultheria for spotting this for me.

Yes, sort of, for a few seconds

Since OP specifically mentions destroying the atmosphere, in "A Matter of Time" the Enterprise effectively ignites the atmosphere of Penthara IV to remove volcanic ash engulfing the planet and then "harmlessly discharging it into space like a lightning rod".

DATA: The motion of the dust has created a great deal of electrostatic energy in the upper atmosphere. With a modified phaser blast, we could create a shock front that would encircle the planet and ionise the particles.

PICARD: That would be like striking a spark in a gas-filled room. DATA: With one exception, sir. The particles would be converted into a high energy plasma which our shields could absorb and then re-direct harmlessly into space.

PICARD: Turn the Enterprise into a lightning rod?

PICARD: And the bad news?

DATA: If our phaser discharge is off by as little as point zero six terawatts, it would cause a cascading exothermal inversion.

DATA: We would completely burn off the planet's atmosphere.

Now, technically the atmosphere was not destroyed, but tension is intentionally heightened over the risk of completely destroying the atmosphere and there is an intentional beat after the planet is engulfed in red before the healthy blue glow ensues.

So let's call that a temporary destruction of the planet (at least in the eyes of the audience).

The original series episode, Obsession, must have left that planet in sorry shape. Spock remarked that half the atmosphere would be ripped away.

During the timeline of the Original Series, Starfleet General Order 24 was an order to destroy all life on a planet.

In both instances where it was ordered or prepared the order was rescinded though and never carried out.

Yes, when the genesis device proved to be unstable in The Search for Spock