Has any new Conan the Barbarian fiction been published since 2003?

The last Conan novel that I'm aware of is Conan of Venarium by Harry Turtledove (2003). Not including comics and such, have any Conan stories been published since then?

Between 2005 and 2006, a new series of nine Conan novels were published, under the collective name Age of Conan. They are divided into three trilogies:

These novels tie into the online role-playing game of the same name, Age of Conan.

It should be noted that none of these novels features Conan directly — they are simply set in the Conan the Barbarian universe and make occasional references to him — and so in that sense, Conan of Venarium is the most recent novel to feature the character of Conan.

The execrable 2011 film spawned an equally execrable novelisation written by Michael A. Stackpole.

Please note that there is an error on the front cover where it states that the film is 'Now a Major Motion Picture'. 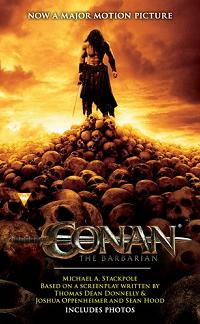 Not the answer you're looking for? Browse other questions tagged conan or ask your own question.

8
Is there any good resource which analyses Conan the Cimmerian continuity?
10
Was Kalidor explicitly intended to be Conan?
6
Do "Conan" movies pass Bechdel test?
21
Why do all Conan the Barbarian movies and TV adaptations stray so much from any of the original stories?
9
A Conan the Barbarian story about a city in which everyone is constantly high with some kind of lotus
3
Why did Howard never use the name "Amra" in any of the stories of Conan's time as a pirate?
4
Where is Sogoria and/or Isseni located in The Hyborian Age?
10
Two Scenes From A Conan The Barbarian Story?