How did the Thermians build the Omega 13?

In the movie Galaxy Quest, the alien Thermians base their entire culture on human television shows, which they mistakenly believe are real. In particular, they build a complete replica of the show Galaxy Quest's ship. In this ship, they build the Omega 13 device.

However, the Omega 13 is never actually seen as the show was cancelled before it was set to appear. It's also explicably stated that not even die-hard fans have any idea what it really does.

Near the end of the film, the Omega 13 is used.

How were the Thermians able to create a working Omega 13 without ever seeing it used?

The main conceit of the film is that the Thermians, with their own brand of hyper-advanced technology were able to replicate a very considerable number of the (treknobabble) technologies mentioned in the show. Some they've clearly been able to work out from the descriptions, others they've cobbled together after traveling to Earth. It's not immediately apparent within the film, but it would seem that the aliens have had access to more than just the historical documents. They've also had access to the Internet and 'Galaxy Quest' fan chatrooms where fans seem to have been sharing blueprints and concept art.

The original script (p.45) had an additional line that was removed 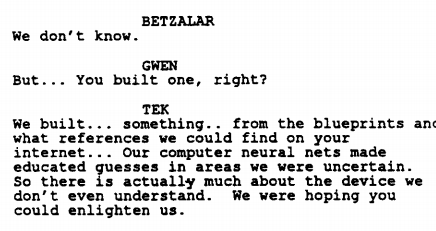 But which did make it into the official novelisation

“But,” Mathesar went on, “Sarris found out about our plans just as we had completed construction of the Protector II. He heard about the device—the Omega Thirteen.” Guy, who was listening, looked puzzled. “The Omega Thirteen. Why does that sound familiar?”
“The lost footage,” Gwen whispered. “At the convention. The mysterious device in our last episo—I mean, historical document.” “What is it?” Tommy asked Mathesar. “What does it do?”
The Thermian held his hands out, and up. “We don’t know.”
“But—you built one, right?” Gwen asked.
“We built something,” broke in Teb, “from the blueprints and what references we could find on your Internet. Our computer neural nets made educated guesses in areas where we were uncertain. So there is actually much about the device that we don’t even understand. We were hoping you could enlighten us.” Jason tried to appear knowledgeable. “Well, it’s a device that we, uh…”
He looked to his shipmates for help. All he got were blank stares.
“… discovered on an alien planet. We don’t know what it does, either.”

Not the answer you're looking for? Browse other questions tagged galaxy-quest or ask your own question.

14
Did Alan Rickman research Spock and/or Leonard Nimoy for Galaxy Quest?
9
Why was Nesmith the only one who remembers after activating the Omega 13?