What are the Justice League members’ weaknesses?

So, I started reading the Justice League comics, and Batman, being Batman, apparently keeps a hidden bunker with a sample of everyone's weakness except Wonder Woman.

Any canon is fine, but comics would be preferred. The JL from that canon also need not have the same member makeup to count. 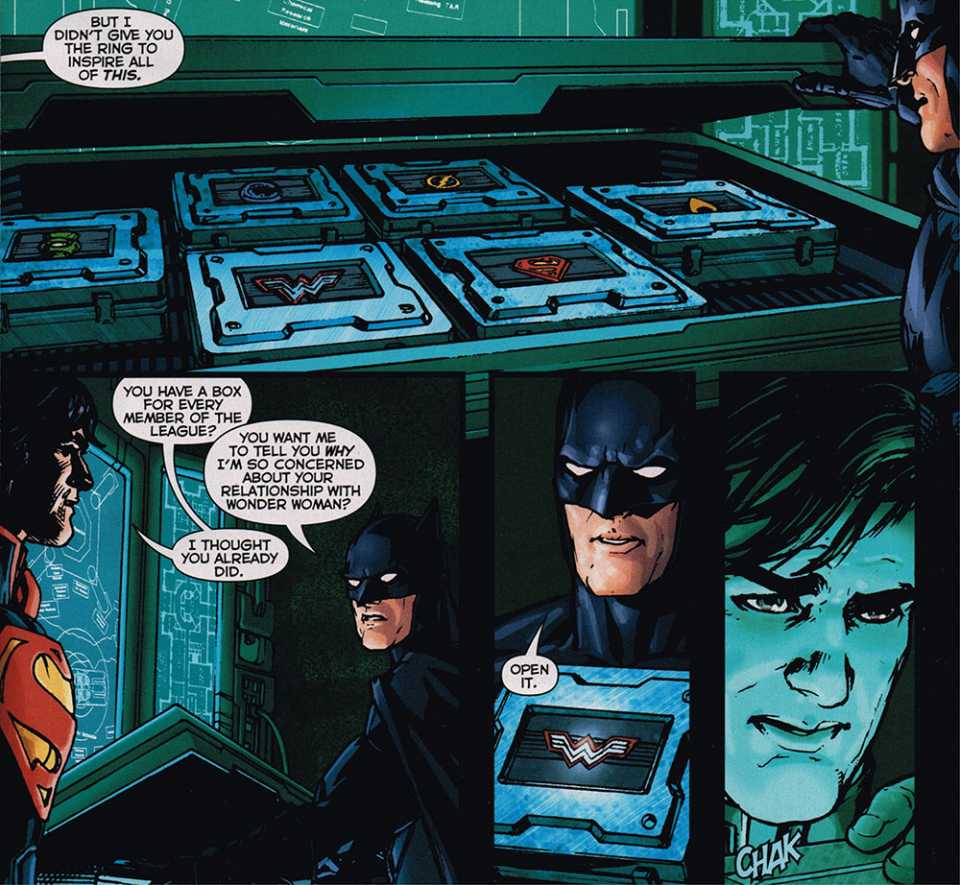 This has also been covered somewhat in the animated movie Justice League: Doom, where Batman's computer is hacked by Mirror Man after hiding in the rear view mirror of his Batmobile. Cyborg plays a role in this movie, but he is not a member of the Justice League during the movie, and so is not included in the plans to take advantage of each member's weakness. Aquaman does not appear in the film at all.

Mirror Man uncovers Batman's files on the Justice League's weaknesses, including plans to neutralize them, while acting on orders from Vandal Savage. Vandal Savage modifies these plans to permanently eliminate the Justice League, and then enlists the help of several others to carry out the plans: Cheetah, Star Sapphire, Mirror Man, Bane, Ma'alefa'ak, and Metallo.

Since Cyborg and Aquaman are not covered by the movie, I can only posit that Cyborg, being a cyborg and largely an electronic being, could be disabled via an EMP or some kind of advanced computer virus/nanobot technology. Aquaman probably overestimates and isolates himself, seeing himself as above others due to his status as King of Atlantis, whose domain covers nearly 75% of the Earth's surface, and covers much more depth than the realms of Earthlings.

All the Justice League mentioned above are susceptible to magic, especially Superman. Without Doctor Fate or Zatara (or Zatara's daughter) on the team, they don't have much of a defense against magic. Shazam (Captain Marvel) utilizes magic, but as far as I know it's only to transform from his normal child self into Shazam, and to call down magic lightning bolts.

The basic scenario behind this was covered in the JLA: Tower of Babel storyline, as Jason Baker's comment mentioned. As with most such storylines, plausibility has to be stretched in order to maintain the premise of "X kills the Y group." This leads to some of these things not being true "weaknesses," in the sense of something that negates or bypasses a characters powers, rather than something to which they were never immune in the first place.

As for Wonder Woman's weaknesses, this answer suggests a very early one, but canonically she does not have weaknesses in the sense that Superman or the Green Lantern do.

Batman is an ordinary human being (most of the time). His strengths and weaknesses come from his psychology, rather than some external source. Is being unwilling to use firearms a weakness?

Historically, Aquaman was only able to be away from water for an hour.

Exactly what "away from water" means has generally been left up to the writer. I believe some stories from the 1960s and 1970s have shown him "saved" by splashing a glass of water in his face. Also, the actual consequences and mechanism surrounding this were never clear, either. The way it was played, he would presumably just keel over dead once the hour was over, as opposed to beginning to have difficulty breathing, or his (presumed) gills being damaged, or something.

I don't believe this is true in the comics at present - at the very least, I can't recall any recent stories to use this.

These weaknesses were deduced from YouTube videos about heroes, "Justice League Doom", and common scientific, general, and superhero knowledge.

Aquaman: A silicon puddy about the size as him. The silicon would slowly dehydrate him. A puddy would be hard to move out of.

Green Lantern: There are three ways to defeat him.

Batman: Use his parents as a distraction to deliver a blow to the windpipe.

Flash: A paralyzing agent like a neurotoxin would make him unable to dodge projectiles.

Wonder Woman: A hologram of a villain, her warrior upbringing will tell her to defeat it, yet she can't making her continue to fight it untill exhaustion.

Superman: A red solar lamp would take away his powers.

20
Is Wonder Woman's only weakness being bound by a man?
10
In what issue did Batman survive the vacuum of space?

27
What did Batman whisper?
27
Is Batman's 'relationship' with Wonder Woman comic-book canon?
11
What was at the beginning of Time?
12
What were the votes for Hawkgirl to remain in the Justice League?
9
Who is the seventh person in the "Unite the Seven?"
6
Superman/Batman/JLA continuity
11
Help me identify this Justice League audio cassette tape from my childhood
3
Justice League comic where the Arkham Asylum gate is locked with a Kryptonite chain
19
Has either Batman's or Superman's identity been accidentally revealed by someone in the comics?