Has Han ever successfully posed as an Imperial before?

With reference to Why didn't Han know how to talk with the guard Captain when attempting rescue? which I consider to be a fail.

Yes, and with a great deal of success. In the "Truce at Bakura Sourcebook" we learn that shortly after destroying the Death Star, Han and the Endor Strike team went on a vital mission against the Star Destroyer 'The Accuser'.

Dressed in a General's uniform and with a squad of disguised rebels he ordered the evacuation of the ship's original crew and took control of the vessel. 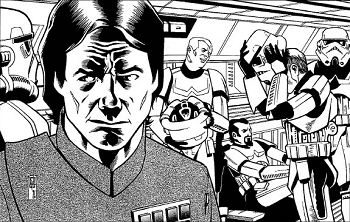 Page: No,sir. After all, we did have the proper Imperial clearance - the code that allowed us through the shield perimeter at Endor - and General Solo was quite convincing when he called the Accuser's captain claiming we had just escaped from the Death Star. They certainly fell for it; they actually used their own docking tractor beams to bring us in.

Mothma: They brought you in?

Page: (Smiles slyly.) Yes ma'am. You could say they invited us aboard.

Ackbar: And how did you eliminate the crew?

Mothma: Of course he did.

Page: Once we took the bridge ... and, I swear all we did was just walk in ... he uh, relieved the Accuser's captain.

Ackbar: Let me see if I've understood you correctly, Lieutenant. General Solo - posing as a stormtrooper - boarded an Imperial Star Destroyer, marched you and your group to the bridge and assumed command?

Ackbar: And how did you and your team manage to eliminate the Accuser's crew?

Page: Er, well, he rendered the Star Destroyer's captain unconscious while my people secured the rest ofthe bridge crew. Then the General activated the ship-wide hull breach alarm and ordered the crew to, er ...

Solo: Oh, knock it off. It worked.

Not the answer you're looking for? Browse other questions tagged star-wars star-wars-legends han-solo or ask your own question.

23
How did Han Solo become a rebel?
10
Why didn't Han know how to talk with the guard Captain when attempting rescue?

23
How did Han Solo become a rebel?
34
What was in the Star Destroyer Avenger's garbage?
33
Were there ever any plans to have Han Solo show up in the prequels?
32
Why doesn't Chewbacca learn to speak Galactic Basic?
10
Why didn't Han know how to talk with the guard Captain when attempting rescue?
5
How many people has Han Solo killed?
0
What was Han Solo thinking upon Leia's revelation on Endor about Luke?
14
Did Han Solo know he was a General before Endor?
5
Was this inspired by the old Han Solo novels