What are the costs of books and materials in Harry Potter?

In the first book, Harry sees his Gringotts vault for the first time.

Griphook unlocked the door. A lot of green smoke came billowing out, and as it cleared, Harry gasped. Inside were mounds of gold coins. Columns of silver. Heaps of little bronze Knuts.

"All yours," smiled Hagrid.

All Harry's -- it was incredible. The Dursleys couldn't have known about this or they'd have had it from him faster than blinking. How often had they complained how much Harry cost them to keep? And all the time there had been a small fortune belonging to him, buried deep under London.

Hagrid helped Harry pile some of it into a bag. "The gold ones are Galleons," he explained. "Seventeen silver Sickles to a Galleon and twenty-nine Knuts to a Sickle, it's easy enough. Right, that should be enough fer a couple o' terms, we'll keep the rest safe for yeh."

JKR has stated in an interview (Comic Relief 2001) that she estimates the value of one Galleon to be "about five pounds," which works out to around US$9.75 (the exchange rate at the time of the interview was US$7.33). In the introduction to both QA and FB, US$250-million is stated to be the equivelent of 34 million Galleons. That also works out to a value of £5 to the Galleon, at the exchange rate of the time. The price listed on the back of the books, however, is not correct, since US$3.99 would equal less than half a British pound, or 8 sickles and 15 knuts. The book instead incorrectly lists US$3.99 as being equal to 14 sickles and 3 knuts. (Unfortunately, CNN.com uses this incorrect value for their Knuts-to-dollars converter.)

This gives us approximate values as follows:

These rates vary as the exchange rate fluctuates - see the Wizarding World Currency Converter for the current rate.

Now looking at the quote

Hagrid helped Harry pile some of it into a bag.

Right, that should be enough fer a couple o' terms, we'll keep the rest safe for yeh.

Obviously "some" is unspecified, but presuming the costs of school textbooks...

He would be carrying at least 10 galleons for each school book, and going by the list of books just for his first year,

All students should have a copy of each of the following:

That's 80 Galleons just for books. This does not include the list of other expenses Harry has for his school years (wand, potion reagents, etc.)

How many Galleons is "some" or is Diagon Alley selling supplies for third world prices?

Sidenote, is this just a case of bad JK maths?

The old PS2 Pottermore site included a 'moment' where you could take a trip to Flourish and Blotts. Not only could you review the books available in the Wizarding World but, helpfully, they were also priced for sale. As you can see, they were most inexpensive. 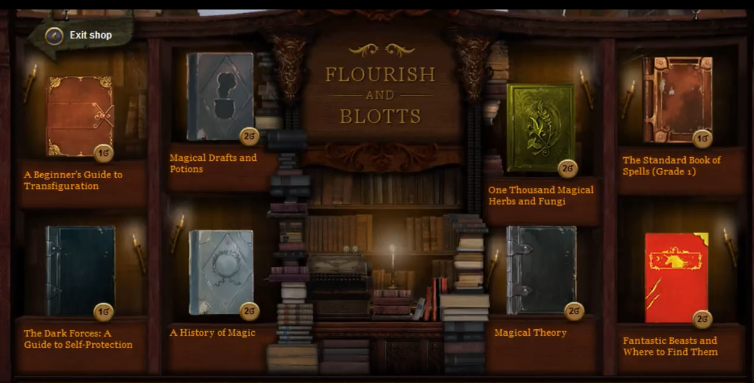 1
What would be the 1990s equivalent of Wizard's currency to then-U.K. currency?
1
How much are Galleons, Sickles and Knuts worth in the real world?
24
How much do wands cost?

71
Why isn't there ever any mention of the Americas in Harry Potter?
10
Why did Hermione use *Galleons* for DA communication method?
14
Why doesn't the huge difference between the muggle and wizard gold exchange rates get misused?
51
What is the Economic system of the Potterverse?
12
Is there any canon indication that Galleons and Sickles are actually made of pure Gold and Silver?
9
Do we ever see anyone perform a mathematical calculation with magic in Harry Potter?
5
Can currency in the Wizarding World be melted down?
10
How did the Weasleys afford a new wand for Ginny (or anything else for that matter) in Harry Potter and the Chamber of Secrets?