Did Yoda suspect Palpatine before the Clone Wars?

In the beginning of Episode II, Padmé and Palpatine meet and have a little argument, and Palpatine seems to guess what Padmé is going to say:

Padmé: Chancellor, if I may comment, I do not believe...

Palpatine: ...that the situation is that serious? (pause) Oh, but I do, Senator.

Padmé doesn't confirm that Palpatine "guessed" right and Palpatine seems absolutely sure that he knew what she was going to say - obviously, since a Sith lord is certainly capable of doing that. Yoda gives Palpatine a glare, which I interpret as 'suspecting'. 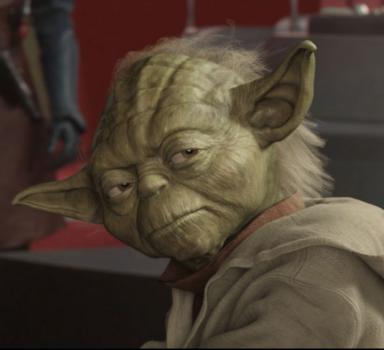 Did Yoda suspect Palpatine already at this stage being a Sith lord or even a force-sensitive human? If he did, why didn't he discuss it with Obi-Wan or Mace or anyone? If he didn't, why the glare?

According to the film's official novelisation, Mace Windu and Master Yoda have been discussing the possibility of someone close to the Chancellor being a Sith Lord, in line with Dooku's admission in the previous film.

With what could only be described as a truly stunning lack of judgement, they ruled Palpatine out of consideration almost immediately, reasoning that he's too powerful to be a truly bad guy or he'd have already done something bad.

There's no indication that at the earlier meeting (in AotC) that they had any serious suspicions that Palpatine was a dark Force user or that he was anything other than a power-hungry politician par excellence.

“But he doesn’t have the authority to interfere with a Jedi investigation …” Obi-Wan frowned, suddenly uncertain. “Does he?”

“The Senate has surrendered so much power, it’s hard to say where his authority stops.”

Mace’s jaw locked. “The only reason Palpatine’s not a suspect is because he already rules the galaxy.”

“But we are closer than we have ever been to rooting out the Sith,” Obi-Wan said slowly. “That can only be good news. I would think that Anakin’s friendship with Palpatine could be of use to us in this-he has the kind of access to Palpatine that other Jedi might only dream of. Their friendship is an asset, not a danger.”

“Of the whole Council, only Yoda and myself know how deep this actually goes. And now you. I have decided to share this with you because you are in the best situation to watch Anakin. Watch him. Nothing more.”

“We-” Obi-Wan shook his head helplessly. “We don’t keep secrets from each other.”

Not the answer you're looking for? Browse other questions tagged star-wars darth-sidious attack-of-the-clones yoda or ask your own question.

6
Why did Chancellor Palpatine create the Clone Wars?
23
Is it “the Jedi way” to kill a defenseless being if they pose a sufficient threat?
10
Did Master Yoda Guess that Palpatine was Evil before Anakin turned?
6
Why didn't Yoda/Palpatine press on with attack?
0
How are people not aware that Palpatine is a Sith/Force Person?
9
Why would the Jedi not go public with their knowledge of the Sith, especially Count Dooku?
13
Why does Yoda think that Obi-Wan won't ever be strong enough to face Sidious?
11
Why did Yoda and Palpatine talk about Anakin?
11
Why did Chancellor Palpatine reveal to Obi-Wan that Count Dooku was a Sith Lord?
47
Is there an in-universe explanation given to the senior Imperial Navy Officers as to why Darth Vader serves Emperor Palpatine?