Why was Bruce Wayne spared by the mugger?

One of the fundamental aspects of Batman's origins is that one night, a mugger, usually Joe Chill, shot his parents in an alley. Barring the occasional "What If?" story, Bruce is always spared by the shooter. This criminal is obviously OK with killing, but Bruce is never shot, only his parents.

In the versions where the encounter was truly random and not pre-planned, why is Bruce always spared?

I'd rather have answers from the comics, but any version of Batman is OK.

It depends on the continuity

According to the Batman wiki:

The murderer is consistently identified as Joe Chill, though the mythos alternates between versions where Batman finds out and where Batman never finds out. Chill has also alternated between being a mere mugger who randomly selected the wealthy Waynes, and a hitman who murdered them intentionally (the former is the most common interpretation).

The reason given for Chill leaving Bruce alive has varied. Sometimes it was because Chill couldn't kill a child, sometimes because Chill heard a policeman's whistle, police siren, or a rapidly approaching policeman. Often, it is because of the cold, frightening look the young Wayne boy gave Chill after the crime; Chill hesitated and ran away.

According to the 2004 comic "Fear Itself," Joe Chill simply didn't "have the guts" to kill Bruce. In this story, Chill is portrayed as properly paranoid, worried that millionaire Bruce Wayne will recognize him and have him sent to prison, there to await his execution.

The police scared him off

In Arkham Asylum (2009), I can seem to make out the faint sound of sirens after Joe Chill kills Bruce's parents in the voiceover. The wiki is probably referring to something else, though.

Bruce Wayne scared him off

As this early comic would have it, Batman had a stare so intense that the hardened killer turned and fled.

What happened in the Dark Knight movies?

As far as I can tell, there's no obvious reason. No police siren or whistle, as has apparently been the case in other continuities. Kevin's answer covers Chill's possible motivations fairly well, and to my knowledge there has been no definitive answer from Nolan or others involved.

As you mentioned, Joe Chill is a mugger. Since you tagged nolan-batman-trilogy, I'll quote the Wikipedia entry for his priorities in that series:

Joe Chill isn't a serial killer. His goal is money/valuables not murdering powerful people and bringing the police down on him. Furthermore, I expect that a prison sentence for murder in Gotham is much longer than it is for mugging/robbery.

Joe shot Thomas and Martha Wayne during a physical struggle after he attempted to steal Martha's necklace. It's at this point that Joe loses control of the situation, panics, and shoots Thomas and Martha. At this point, Joe is standing there with 2 dead bodies, a wallet, and Bruce. Joe has what he wants (money), so now it's time to get out of here before the police show up. Bruce is no immediate threat; he is a child that couldn't threaten Joe. Bruce doesn't charge Joe or jump for the gun, so there is no reason for Joe to kill Bruce.

Going back to the point about the police; murdering a defenseless child will get much more attention than killing two rich adults during a struggle.

Joe does have a few possible motivations for killing Bruce:

It wouldn't be much of a Batman story if Batman gets killed as a kid (other than Flashpoint as Richard commented).

In Batman #673 - Joe Chill in Hell, Chill states that he spared Bruce because he reminded him of his own deceased son. 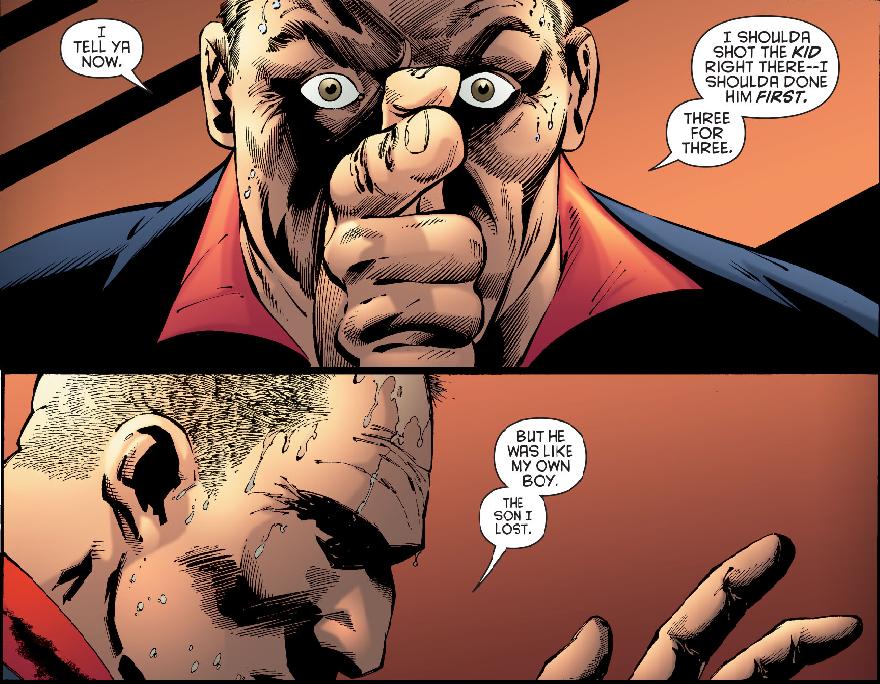 In Batman: The Telltale Series, it's confirmed that Joe Chill was an assassin sent by Hamilton Hill (I realize that this is pretty much completely different from the rest of the continuities here, but whatever). He shoots Thomas in the side after he lunges at him and then again in the chest. Finally, Joe shoots Thomas right through the eye. He then shoots Martha twice, killing her. He then steals Thomas' wallet and Martha's necklace. Then, he has the gun to the defeated and traumatized Bruce's head, but hears police sirens and runs away snickering. Later, we hear that Chill was stabbed to death in prison.

Not the answer you're looking for? Browse other questions tagged dc batman nolan-batman-trilogy dc-extended-universe dc-animated-universe or ask your own question.

1
Why wasn't Bruce Wayne shot too?

28
Why did Bruce Wayne have sex with this character?
37
How was Bruce Wayne able to reclaim control of Wayne Enterprises in Batman Begins?
7
Did Bruce Wayne ever fight crime as a masked vigilante, before becoming the Batman?
23
Have we ever seen Bruce Wayne getting facial re-constructive surgery?
13
Is Alfred the moral conscience of Bruce Wayne/Batman?
6
Are there any alternative origin stories for Batman?
1
Why does Harvey Dent hate Bruce Wayne?
2
How old was Bruce Wayne in Batman Beyond?