How large were the Great Eagles that carried Frodo and Sam?

From this question on Worldbuilding, a bird would have to be quite large to carry a passenger, even a hobbit. The Great Eagles article on Wikipedia says that the largest eagle had a wingspan of 180 feet (55 meters), which would have been easily enough to carry a hobbit.

Is there any indication of what size the eagles were that carried Frodo and Sam? If Wikipedia is correct, 180 feet would be the upper limit, and I assume that the other eagles were also quite large.

We don't know precisely. If forced to estimate, I would say somewhere between 10 and 55 meters of wingspan.

The only measurement of a Great Eagle we're given is for Thorondor, King of the Eagles in the first age (emphasis mine):

[E]ven as Fingon bent his bow, there flew down from the high airs Thorondor, King of Eagles, mightiest of all birds that have ever been, whose outstretched wings spanned thirty fathoms; and staying Fingon's hand he took him up, and bore him to the face of the rock where Maedhros hung.

A fathom is six feet long, which is about 55 meters1. This is where the cited Wikipedia article is getting its number from.

Of course this is Thorondor, the mightest Eagle of all time, from the distant Elder days. What about Eagles in the Third Age?

We can get another clue from one of Tolkien's watercolours, titled Bilbo woke with the early sun in his eyes: 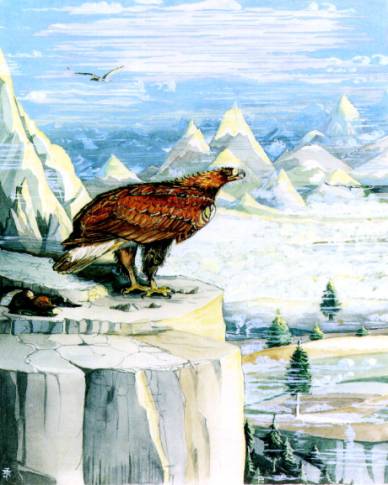 It's not much of a clue, since it relies on the assumption that the Professor's paintings are to scale. But, for whatever it's worth, my extremely rough measurements indicate that Bilbo is about 60 pixels high in that image, and the wing of the Eagle is about 150 pixels from shoulder to tip.

We don't know Bilbo's exact height, but we know that hobbits generally were about 3'6" (about 1 meter) tall. Using that assumption, we can estimate that one of the Eagle's wings is about 2.5 meters (8'2") long, with a total wingspan of more than 5 meters (16'4").

This is a pretty sizeable bird, comparable to recent estimates on the size of Quetzalcoatlus. However, I do want to emphasize again that this is an extremely rough estimate.

1 Or 180 feet, if that's the unit of measurement you insist upon.

11
Height of the LoTR Races