Is Alfred the moral conscience of Bruce Wayne/Batman?

I'll admit from the outset that I haven't read many of the Batman comics, and this is taking information primarily from the Dark Knight Trilogy. It seems to me that Alfred is Bruce's, and to the same extent Batman's, moral guidance. The quotes below are what I believe to be evidence of this.

Bruce Wayne: People are dying, Alfred. What would you have me do?
Alfred Pennyworth: Endure, Master Wayne. Take it. They'll hate you for it, but that's the point of Batman, he can be the outcast. He can make the choice that no one else can make, the right choice.
Bruce Wayne: Well today I found out what Batman can't do. He can't endure this. Today you get to say "I told you so."
Alfred Pennyworth: Today, I don't want to.

Bruce Wayne: I knew the mob wouldn't go down without a fight. But this is different, they crossed the line.
Alfred Pennyworth: You crossed the line first, sir. You hammered then and in their desperation they turned to a man they didn't fully understand. Some men aren't looking for anything logical. They can't be bought, bullied, reasoned or negotiated with. Some men just want to watch the world burn.

Bruce Wayne: There's nothing out there for me.
Alfred: And that's the problem. You hung up your cape and your cowl, but you didn't move on, you never went to find a life, to find someone...
Bruce Wayne: Alfred... I did find someone.
Alfred: I know, and you lost her. But that's all part of living, sir. But you're not living. You're just waiting, hoping for things to go bad again.

Alfred: I'll get this to Mr. Fox, but no more. I've sewn you up, I've set your bones, but I won't bury you. I've buried enough members of the Wayne family.
Bruce Wayne: You'll leave me?
Alfred: You see only one end to your journey. Leaving is all I have to make you understand, you're not Batman anymore. You have to find another way. You used to talk about finishing a life beyond that awful cape.
Bruce Wayne: Rachel died believing that we would be together; that was my life beyond the cape. I can't just move on. She didn't, she couldn't.
Alfred: What if she had? What if, before she died, she wrote a letter saying she chose Harvey Dent over you? And what if, to spare your pain, I burnt that letter?
Bruce Wayne: How dare you use Rachel to try to stop me?
Alfred: I am using the truth, Master Wayne. Maybe it's time we all stop trying to outsmart the truth and let it have its day. I'm sorry.
Bruce Wayne: You're sorry? You expect to destroy my world and then think we're going to shake hands?
Alfred: No... no, I know what this means.
Bruce Wayne: What does it mean?
Alfred: It means your hatred... and it also means losing someone that I have cared for since I first heard his cries echo through this house. But it might also mean saving your life. And that is more important.
Bruce Wayne: Goodbye, Alfred.

I love Batman, I feel like this isn't an traditional "answer." However, I think I can help a non-comic reader with really good questions.

Keeping in mind Alfred is the only person in the entire Universe that knows everything about Bruce Wayne and Batman, and he raised Bruce. We see this all the time in psychology when talking about learned behavior between parents/guardians to their children. Alfred is a war veteran, extremely wise, intelligent and morally sound, of course he'd do his best to hand down these qualities to Bruce at such a vital part of his personality developmental stages.

I think those three characters along with others like Superman and Alfred do act as "moral compasses" to a certain extent. I personally feel like Batman's morals and motivations are concrete and rarely in jeopardy. But more importantly, I think they give Bruce the strength to keep going constantly keeping his faith in humanity strong. Considering all the things he's faced, it's a miracle he hasn't given up. From criminals constantly escaping Arkham, to losing a Robin and considering it the biggest failure he's ever had, he's faced enough to make any sane person quit. That being said, I have seen Batman break his morals rarely.

This last bullet-point is probably my favorite. It's something debated a lot in the Batman fandom. I think Bruce is bored with normal life. He seems to dislike being Bruce and would much prefer being Batman even if there's nothing super important going on. I think most personality traits of Bruce are faked and forced and took time to master. Being as diplomatic, sociable, flirtatious really doesn't fit well as Batman, which is why I could totally see why you could think it's a separate consciousness. I just can't shake the feeling that it's a challenge for him. I think if it was a separate consciousness, he'd be better at humor, and wouldn't be so reluctant to be Bruce.

While he certainly serves as a moral compass for Bruce, Alfred isn't the moral conscience. Batman's morality is complex - just like yours and mine - and comes from lessons his parents taught him, how his parents died, his upbringing under Alfred, and a myriad of other factors. This question helps unpack Batman's morality better than I can:

Why didn't Batman just kill Joker when he had the chance?

Alfred's role is mostly that of a caregiver, technical assistant, field doctor, and manager of his estate but along with the rest of the Batman Family, he helps keep Bruce from letting his crusade against evil take him too far down a dark path.

But Bruce had a far different way of honoring his parents in mind, and when he adopted the cowl, Alfred came along for the ride, tirelessly guarding his employer’s secret while providing some much-needed assistance. Whether it’s skilled technical support, medical aid or simply managing the complicated schedule that comes with being a business leader, nighttime vigilante and wealthy playboy—it’s all under the purview of Mr. Pennyworth. Driven by love and an unwavering sense of loyalty, Alfred nevertheless worries deeply about Bruce. He understands the importance of Batman to a city such as Gotham, but after a lifetime of raising Bruce, he still sees a young, scared boy where most see a hardened hero. And every night the bat-signal flashes across the city skyline is another night that boy will spend searching for a way to undo something that could never be undone. A search that Alfred realizes could very well lead to his end.

To answer your sub-questions: 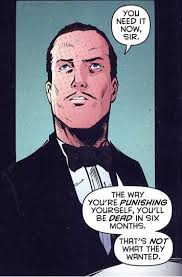 Not the answer you're looking for? Browse other questions tagged dc batman nolan-batman-trilogy or ask your own question.

58
Where was the first appearance of the idea that Batman is the real personality and Bruce is the mask?
5
Why didn't Batman just kill Joker when he had the chance?